The Crawfords have a deep, lifelong love of music and the arts that led them to connect with CCM

Dr. Alvin Crawford, retired Chief of Orthopedics and founding director of the Spine Center at Cincinnati Children’s Hospital, has had a distinguished, internationally renowned career as an orthopedic surgeon. In his honor, the Spine Center was renamed the Crawford Spine Center.

But his first love was music.

He started playing trumpet in seventh grade, eventually switching to clarinet. He started college as a music major and wanted a career as a studio musician. In his sophomore year of college, he made a decision that changed the lives of thousands of children across the world: he decided to become a physician. 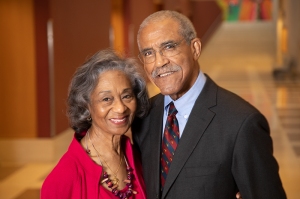 Dr. Crawford attended Meharry Medical College in 1960, a time when most if not all southern schools were segregated. He applied for admission to the University of Tennessee and became the first African-American to enroll in this southern medical school. He could not transfer because the University of Tennessee did not consider Meharry Medical College an accredited medical school.

“I became an academic orthopedist, but continued to play,” he says. “I was hired by UC to head the Pediatric Orthopaedic service. Once my wife and I found out what CCM was all about, we decided to get involved. After I retired at Cincinnati Children’s, I was able to attend the jazz improvisation course for freshmen and we started coming to performances. Last year I took jazz history.”

Continuing to live out his love of music, Dr. Crawford helped form a group called “The Wannabes,” which plays for nonprofits and has played an opera gala. From there he joined the Queen City Concert band, a community band in Cincinnati.

Jean Crawford’s interest in music stretches back to the piano lessons she took as a child. She was a teacher and high school counselor and sang in choruses through college.

“I always encouraged my students to get involved and take any type of arts as electives,” she says. “When I served on the Cincinnati Opera board, I saw that most of our singers in the chorus were from CCM. When we attended CCM’s Moveable Feast, we realized the caliber of musicianship here and were hooked on CCM.”

Mrs. Crawford talks about the opportunity she did not have, but that she wants all children to have. “I lived in the segregated south and the opportunities to attend and participate in the arts were limited,” she says. “So my goal is to make sure that the performing arts are available to all communities. In this area, school districts have limited support for funding the arts. Through the prep schools, CCM provides arts exposure to them. Also, students from CCM go to public schools to give the children more exposure. I think that’s important. And to do that you need money.“

“I think they’re doing something [at CCM] that’s really important,” Dr. Crawford adds. “I became involved in the CCM Dean’s Advisory Council and I can see that the people here care. They care, and they want to put out a good product. And once I became involved with CCMpower, I was able to meet the kids and see what they’re doing.”

Who will you empower NEXT?

In order to recruit and retain top talent, CCM must be able to offer competitive scholarship and grant opportunities to our students. CCMpower raises funds through membership and special events in order to provide the resources that attract the best and brightest students. Learn more about how you can empower the next generation of CCM stars.