CCM is pleased to announce that From the Top with Host Christopher O’Riley, the preeminent showcase for young musicians, will come to UC’s Corbett Auditorium to record a radio broadcast on Wednesday, April 2, 2014.

Heard weekly in the Greater Cincinnati area on WGUC 90.9 FM, the popular NPR radio program features the amazing performances and captivating personal stories of extraordinary young classical musicians from across the country. The From the Top episode recorded on April 2 will be presented by CCM to celebrate the 25th anniversary of the Starling Chamber Orchestra, the college’s premier preparatory string ensemble.

Violinist and 2012 Naumburg Competition-winner Tessa Lark, 24, and violinist Jonathan Miron, 21, both Starling Orchestra alumni, will perform “Romance” by Joseph Hellmesberger, along with From the Top alumnus Charles Yang.

For tickets and information, contact the CCM Box Office at boxoff@uc.edu or 513-556-4183, or visit ccm.uc.edu/fromthetop.

From the Top may be heard locally on WGUC 90.9 on Saturdays at 9 a.m.; this episode will air nationally the week of May 5.

About From the Top
What began as a radio experiment in 2000 quickly became one of the fastest growing and most popular weekly classical music programs on public radio. Broadcast on nearly 250 stations nationwide to an audience of nearly 700,000 listeners, From the Top has been described by the Boston Globe as, “an entertaining, accessible, and inspirational mix of outstanding musical performances, informal interviews, skits, and games, the show is a celebration of extraordinary musicians who happen to be teenagers leading fairly normal lives.”

Annually, From the Top‘s live tapings reach more than 20,000 live audience members of all ages across the United States. In conjunction with its national tour, the Boston-based non-profit offers leadership training to young artists and conducts classroom and community programs leveraging the power of its performers as role models for younger students. In addition, From the Top and the Jack Kent Cooke Foundation award $10,000 scholarships to high achieving musicians with limited financial means. The program has invested more than $1.8 million in support for pre-college students since 2005. From the Top launched its Emmy Award winning PBS television series From the Top at Carnegie Hall in 2007.

From the Top is an independent nonprofit organization headquartered in Boston that celebrates the power of music in the hands of extraordinary young people: unleashing the potential of young musicians as leaders in the arts; trumpeting the role of music to impact and enrich lives; and inspiring and building new audiences with a deeper appreciation for classical music.

From the Top’s radio program is made possible through grants from the National Endowment for the Arts and the Jack Kent Cooke Foundation, and corporate underwriting from U.S. Trust, Bank of America Private Wealth Management. It is also supported through the generous contributions of individuals and institutions as well as public radio stations. From the Top’s founding partners are New England Conservatory and WGBH. Learn more at www.fromthetop.org. 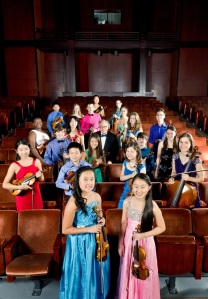 About the Starling Chamber Orchestra
Founded in 1989 by CCM Professor and Dorothy Richard Starling Chair in Classical Violin Kurt Sassmannshaus, the Starling Chamber Orchestra is part of the Starling Preparatory String Project. This specialized honors program trains young string students with professional potential. The program is generously funded through a grant by the Dorothy Richard Starling Foundation. The superbly talented musicians are selected by audition. Students receive lessons, music theory, chamber music instruction and rehearse in the Starling Chamber Orchestra each Saturday. Instructors include CCM faculty and graduate students specially trained and chosen by Professor Sassmannshaus. About half of the students are from the greater Cincinnati area, and many others commute on Saturdays from other states to CCM. Some students have relocated with their families from foreign countries to attend this program.

Many Starling alumni are now mentoring the next generation of talent with appointments at premiere conservatories such as Musikhochschule Lübeck, Hanns Eisler Musikhochschule Berling, the Juilliard School, Peabody Conservatory, Roosevelt University, the University of Michigan, Beijing Central Conservatory and CCM.

Purchasing Tickets
Tickets to the April 2 taping of From the Top with Host Christopher O’Riley celebrating the 25th anniversary of the Starling Chamber Orchestra are $25 for adults and $15 for non-UC students.

$10 UC student rush tickets will become available on the day of the performance; limit one ticket per valid UC student ID.

Tickets can be purchased in person at the CCM Box Office, over the telephone at 513-556-4183 or online at ccm.uc.edu/fromthetop.