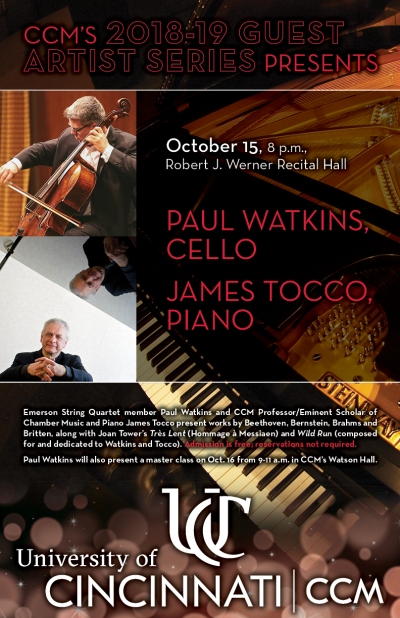 The program features works by Beethoven, Bernstein, Brahms and Britten, along with Joan Tower’s Trés Lent (Hommage à Messiaen) and Wild Run, which was composed for and dedicated to Watkins and Tocco. Complete repertoire and event information is below.

Paul Watkins will also present a master class on October 16 from 9-11 a.m. in CCM’s Watson Hall.

About Paul Watkins
Acclaimed for his inspirational performances and eloquent musicianship, Paul Watkins enjoys a distinguished career as concerto soloist, chamber musician and conductor. During his solo career he has collaborated with world renowned conductors including Bernard Haitink, Paavo Berglund, Leonard Slatkin, Sakari Oramo, Gianandrea Noseda, Sir Mark Elder, Richard Hickox, Andris Nelsons, Sir Andrew Davis, and Sir Charles Mackerras. He performs regularly with all the major British orchestras and has made eight concerto appearances at the BBC Proms, most recently with the BBC National Orchestra of Wales in the world premiere of the cello concerto composed for him by his brother, Huw Watkins.

A dedicated chamber musician, Watkins was a member of the Nash Ensemble from 1997 until 2013, when he joined the Emerson String Quartet. With the Quartet he has travelled extensively, performing at major international festivals including Tanglewood, Aspen, Ravinia, Edinburgh, Berlin and Evian and has collaborated with distinguished artists such as Emanuel Ax, Yefim Bronfman, Renee Fleming and Barbara Hannigan. He is a regular guest artist at the Chamber Music Society of Lincoln Center in New York and Music@Menlo, and in 2014 he was appointed Artistic Director of the Great Lakes Chamber Music Festival in Detroit.

Parking and Directions:
Parking is available in the CCM Garage (located at the base of Corry Boulevard off Jefferson Avenue) and additional garages throughout the campus of the University of Cincinnati. Please visit uc.edu/parking for more information on parking rates.