The University of Cincinnati has announced its 2013 All-University Faculty Award Winners and we are delighted to report that this year’s honorees include three CCM faculty members! Congratulations to Douglas Knehans, bruce d. mcclung and Miguel A. Roig-Francolí.

Learn more about their respective awards below:

Composer Douglas Knehans, DMS, has been recognized for both the quality and the quantity of his artistic output. With a career that spans over three decades, Knehans writes music for a variety of media: from orchestra and opera to electronic, dance and vocal music. His compositions have been described as “wildly inventive” by the Miami Herald, “…exciting..” and “…beautiful..” by the Washington Post and “…effective…incisive… and hauntingly beautiful…” by Fanfare Magazine.

“Douglas is an extraordinarily accomplished and prolific composer,” says CCM Professor of Composition Joel Hoffman. “[He] has put together a catalog of work over the years that is remarkable in its breadth of media, its aesthetic reach and – most importantly – its consistent high quality.”

Recently, Knehans was honored as a special guest of the Premieres of the Season Festival in Kiev, Ukraine, where the National Symphony Orchestra of Ukraine presented the world premiere of his orchestral work ripple. This work has also been recorded for worldwide release on ERM Media’s “Masterworks of the New Era” series, distributed by the esteemed classical musical label Naxos.

“His music reveals the story of a composer who is not caught in his own good habits but keeps searching and changing,” observes Yinam Leef, Jerusalem Academy of Music and Dance President and Professor of Composition. “It is therefore no surprise that this creative activity spreads over three continents. His music is regularly performed in the U.S., Australia and Europe and his recent composition prizes span from Oregon, U.S. to Athens, Greece.”

In the hands of bruce d. mcclung, PhD, a classroom experience is not just educational. It’s transformational.

A well-known and frequently published authority on American music, musical theatre, mass entertainment and manuscript studies, he is equally well regarded as a teacher and mentor. Described by students and colleagues alike as a “virtuoso” of the classroom, mcclung (who signs his name in lowercase) uses all of his courses as an opportunity to lay the groundwork for life-long learning. In the words of one former student, “In all of his classes he not only teaches, but he also teaches how to teach and learn.”

The 2009 recipient of the UC Graduate School’s Excellence in Doctoral Mentoring Award, mcclung’s teaching style is defined by empathy and engagement. He is known to circulate information cards to his students on the first day of class, requesting that they share information about themselves and what they expect to learn before a syllabus is ever distributed. He allows his students’ responses to guide him as he plans activities and establishes learning objectives. “Providing a solid, yet flexible, framework reveals to students that I value their ideas and promote a classroom environment of discovery,” he explains.

The discoveries promoted in mcclung’s classroom extend well beyond musicology, encompassing critical thinking skills, learning strategies and even neurological theories. mcclung encourages his students to take responsibility for their learning and provides them with the tools necessary to make the most of their time in the classroom.

“It is absolutely impossible for me to do anything that includes writing,” another former student observes, “and not think about Dr. mcclung and the level of excellence he impressed upon me.” 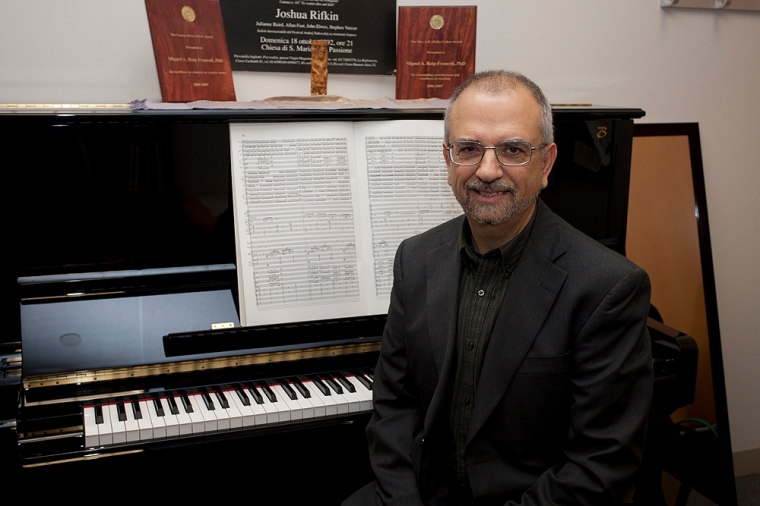 Miguel A. Roig-Francolí, PhD, is widely recognized as one of the leading music theory pedagogues in the United States. He is equally renowned for his ability to make this sometimes-difficult topic approachable.

“Professor Roig-Francolí possesses the humanizing and powerful ability to extend the deepest respect to each of his students. The effects are transformative,” remarks one former student. “His classroom is alive. And not with cell phone or computer-powered distraction, but with this dynamic kind of learning.”

Known for his trademark enthusiasm and passion for the subject, coupled with a keen focus on each student’s comprehension, Roig-Francolí’s teaching career has spanned over 25 years.

“He is one of those rare individuals not self-aggrandized by his considerable accomplishments but consumed, rather, with sincere concern for learners and the obligation of teachers to create sensitive and intellectually honest learning environments,” suggests Timothy A. Smith, professor of music theory at Northern Arizona University.

Roig-Francolí’s influence extends well beyond his own classroom, though. He has cemented his reputation in the field of music theory pedagogy by authoring two textbooks and an anthology published by McGraw-Hill: Harmony in Context (second edition; 2011), Understanding Post-Tonal Music (2007; Chinese translation published by People’s Music Publishing House, Beijing, 2012), and Anthology of Post-Tonal Music (2007). These texts are used in over 100 colleges and universities in the United States, Canada and China.

Holding a double appointment in CCM’s departments of Music Theory and Composition, Dr. Roig-Francolí is the previous recipient of UC’s Mrs. A.B. “Dolly” Cohen Award for Excellence in Teaching (2007) and the George Rieveschl Jr. Award for Creative and/or Scholarly Works (2009).

Learn more about all of this year’s All-University Faculty Award Winners here.