The University of Cincinnati College-Conservatory of Music Preparatory and Community Engagement is proud to announce that the remarkable talents of the Starling Chamber Orchestra are embarking on a tour in southern China this summer. Between June 13 and June 24, 2016, these young artists will perform a total of six concerts in professional venues. 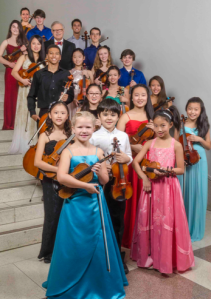 The Starling Chamber Orchestra (SCO) is a 25-member string ensemble of young artists from the Cincinnati Starling Project. CCM Violin Professor and Dorothy Richard Starling Chair in Classical Violin, Kurt Sassmannshaus, founded the Starling Project in 1989. It offers unprecedented opportunities for young artists to perform as soloists, tour internationally, and make recordings. These young virtuosi have attracted widespread attention, including feature articles in the Washington Post and the New York Times. Branded as “The World’s Youngest Chamber Orchestra” by the Münchner Merkur, the orchestra has been featured on From the Top, Performance Today and on Robert Sherman’s Young Artists Showcase program in New York. The SCO maintains a busy touring and recording schedule. Since 1992, the orchestra has performed frequently at the Aspen Music Festival and has toured Europe, Korea, Russia, and the People’s Republic of China and at Lincoln and Kennedy Centers. The orchestra also performs an annual series of concerts at CCM.

The members of the Starling Chamber Orchestra also participate in the Cincinnati Starling Project, a specialized educational program for talented young string players. Its mission is to pass on the rich tradition of classical music to the next generation of performers and audiences by training exceptional students. In addition to private lessons, students participate in a comprehensive program that includes chamber music and music theory.

CCM’s 2012 Accent Chamber Music Festival for young artists will present six exciting performances from June 10–16 in the intimate Cohen Family Studio Theater. All concerts are free and open to the public.

The Gerda Lissner Foundation has announced the winners of its 2012 International Vocal Competition and three current and two former CCM students received top prizes at the prestigious event, which took place in late March and early April in New York City.

Artist Diploma candidate Marco Cammarota received the competition’s Encouragement Award, which came with a $2000 award. Congratulations to all of this year’s award recipients!

The Starling Chamber Orchestra will begin its 2011-2012 concert series at 7 p.m. on Sunday, Nov. 20, 2011 at CCM’s Robert J. Werner Recital Hall. This free performance will showcase the versatile pre-college string players as soloists, chamber musicians and as members of the orchestra.

CCM’s annual Accent Chamber Music Festival for young artists announces six exciting performances from June 12 – 18 in the Cohen Family Studio Theater in CCM Village. A complete schedule is listed below. All concerts are free and open to the public.

The Accent11 performances feature masterworks of the chamber music repertoire as well as the innovative works of new composers, performed by the stellar Accent11 faculty-artists alongside outstanding college and graduate-age artists who are immersing themselves in the study of chamber music for the duration of the festival.