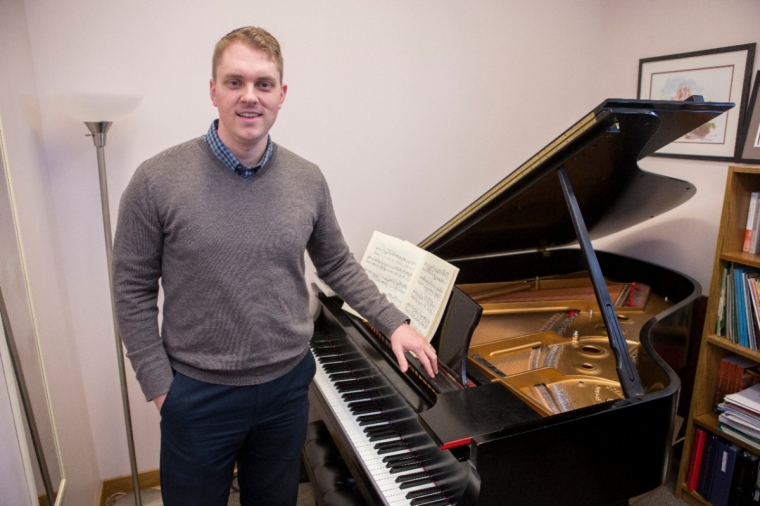 Distinguished faculty members were recognized in UC’s university-wide Faculty Awards Celebration on Tuesday, April 17, 2018. They were each nominated by students, staff or other faculty members in December and given awards during Tuesday’s ceremony in Tangeman University Center’s Great Hall.

Along with the other award winners, CCM Piano Instructor Andy Villemez was honored in this year’s ceremony, where he was presented with the Outstanding Adjunct Faculty Award. Visit the Faculty Awards website to read profiles on each of the recognized faculty members.

Villemez is praised by his CCM colleagues for going above and beyond for students. The adjunct instructor of piano carries a full course load, teaching undergraduate and graduate classes, while mentoring students outside of the classroom.

“He uses his position as an adjunct instructor to better prepare his students for life as professional musicians rather than just fulfilling his duties as an instructor,” says one current student.

He graduated from CCM with a DMA in Piano in 2015 and incorporates his experience as a recent graduate into his teaching methods. In order to better prepare students for life after graduation, Villemez began the “Big Picture” lecture series, a professional development initiative that is open to all CCM students of any major.

The lecture series falls outside of Villemez’s typical responsibilities as an instructor. It includes mentoring students on community engagement, finance management and even how to build a professional website.

He is also the faculty advisor for CCM’s Chapter of the Music Teachers National Association (MTNA), where he works with students on research projects and conference proposals. Earlier this year, one student presented research at the MTNA Collegiate Symposium in Austin, Texas, and thanks Villemez for helping her develop an engaging presentation in her nomination letter.

Villemez recently presented two of his own research papers at the Ohio Music Teachers Association Annual Conference: “Building Arts Ambassadors Through Private Music Instruction” and “Teaching to Everyone: The Basics of Universal Design for Learning.” He has also written multiple scholarly articles focused on piano pedagogy for the MTNA Electronic Journal and Clavier Companion.

“What distinguishes Dr. Villemez is his commitment to research, pedagogical leadership and mentorship of students,” says CCM Interim Dean bruce mcclung. “Simply put, he is one of CCM’s most valuable adjunct faculty members for the model he sets and his deep engagement with student learning and career development.”

Sixteen distinguished faculty members were awarded in UC’s university-wide Faculty Awards Celebration on Tuesday, April 19. Each year, the university pays tribute to outstanding faculty members who go above and beyond for their students. They were each nominated by students, staff or other faculty members in December and given awards during Tuesday’s ceremony in Tangeman University Center’s Great Hall.

Along with the other award winners, two CCM professors were saluted in this year’s celebration: Kimberly Daniel de Acha, adjunct associate professor of Musical Theatre/Voice, and Jonathan Kregor,  professor within the Department of Composition, Musicology & Theory.

Visit the UC Magazine website to read profiles on each of the 16 awarded faculty members. 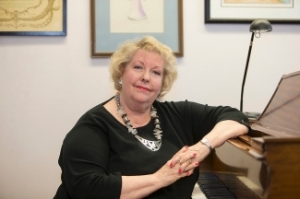 The extraordinary success of Kimberly Daniel de Acha, CCM’s accomplished adjunct associate professor of musical theatre voice, is exemplified in her former students by their leading and supporting roles on Broadway and touring Broadway shows, as Tony Award nominees and as working professionals in theaters nationally.

In addition to her own success as an award-winning performer and theater professional,
de Acha’s outstanding musical theatre voice pedagogy successfully edifies the significance of developing a positive self-image, which her students say is key for rising to one’s full potential in the theater.

According to student testimony, de Acha’s tough-love teaching style is really not so tough. Instead, it is wrapped in a nurturing understanding of each of her student’s unique talents, encouraging them to carve a niche for their own success.

De Acha’s “claim what is yours” teaching mantra has fueled the passion in each of her students to build on their unique abilities, and to claim their place on the professional stage. By exemplifying this herself, she inspires this in her students.

De Acha sits on the CCM Power Board and co-directs and underwrites the costs of “Music for All Seasons at Historic Peterloon,” an annual four-concert music series that features CCM students, faculty and area professionals, and helps to bring community awareness to CCM. All proceeds are donated for student scholarships.

In de Acha’s 46th year as a performer and teacher, she refers to teaching at CCM as “the gift she gives herself.” And, her students and colleagues are unanimous in their praise for her unwavering commitment to community outreach and charitable efforts, but especially for her keen ability to recognize and enhance the distinctive best in each one of her students — which changes their lives forever. 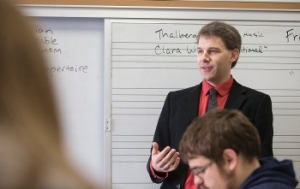 Jonathan Kregor, professor of the department of composition, musicology and theory at CCM, leads an in-class discussion. Photo by Andrew Higley.

In moving from assistant to full professor of musicology in only eight short years, Jonathan Kregor’s career has followed a trajectory that might be referred to in musical terms as prestissimo.

Since coming to the College-Conservatory of Music in 2007, he has produced extensive publications and given numerous invited talks in North America and Europe that have brilliantly opened visual and acoustic windows into the lives, politics and musical activities and works of 19th-century classical composers — most particularly into the complex and fascinating life of the Hungarian composer-pianist Franz Liszt.

While Liszt’s own compositions form a central — albeit still controversial — part of today’s musical canon, Kregor has focused in depth on an overlooked part of Liszt’s musical activities: his transcriptions of other composers’ works. By detailing the significance of Liszt’s reproductions for the piano of orchestral and large-scale vocal compositions by Wagner, Mozart, Berlioz, Beethoven and others, Kregor’s scholarship sheds a unique light on the impact that Liszt and his contemporaries all had on the broader intellectual context of 19th-century Europe. And Dr. Kregor’s expertise as the leading Liszt scholar of his generation has also evolved into him becoming an equally respected authority on 19th-century program music.

Through his vast array of scholarly publications that include monographs, articles and essays and critically edited music, Kregor has helped shape the understanding of 19th-century music by skillfully inviting everyone to reconsider assumptions about classical creativity and the compositional process.

Owing to frequent testimony, Jonathan Kregor continues to enrich the lives of his students, collaborators and colleagues as a beacon in the field of historical musicology: not only through his distinguished scholarship, but also — as a student of a student of a student of Liszt himself — by transforming its results into musical practice.