Twenty-six current and incoming students competed for five coveted full-tuition scholarships and $65,500 in additional awards during the University of Cincinnati College-Conservatory of Music’s 2020 Opera Scholarship Competition.

Since its inauguration in 1976, this annual competition welcomes current and incoming CCM voice students to compete for scholarships and cash prizes. A panel of judges composed of opera industry professionals selects each year’s class of prizewinners.

Six students won awards in this year’s competition, which was conducted virtually due to the COVID-19 pandemic. To maintain social distancing, each participating singer was asked to select two arias. Each singers’ assigned pianist then recorded a piano reduction of the chosen arias and provided audio files, which served as virtual accompaniment for the competing vocalists.

Singers were required to record their performance on their smart phones and submit their recordings back to CCM. These recordings were then shared with the competition’s panel of distinguished judges.

Michael Pandolfo, baritone, first-year Master of Music student from Fort Worth, Texas; studying at CCM with William McGraw
Prize: Full-tuition scholarship and the Corbett Award ($15,000)
The Corbett Award is supported by the Corbett Foundation in cooperation with CCM.

Brittany Logan, soprano, second-year Master of Music student and incoming Artist Diploma student from Garden Grove, California; studying at CCM with Gwendolyn Coleman
Prize: Full-tuition scholarship and the Seybold-Russell Award ($10,000)
This award is supported by the Seybold-Russell Scholarship Fund in cooperation with CCM.

The Department of Opera at CCM boasts one of the most comprehensive training programs for opera singers, coaches and directors in the United States. Students at CCM work with some of the most renowned teachers and artists active in opera today.

CCM students frequently advance to the final rounds of the Metropolitan Opera National Council Auditions, which is widely considered to be the nation’s most prestigious vocal competition. In 2019, soprano Elena Villalón (BM Voice, ’19) was named a Grand Finals Winner at the competition while she was still finishing her undergraduate degree at CCM. CCM’s other recent Grand Finals Winners include Jessica Faselt (MM Voice, ’16) in 2018, Amanda Woodbury (MM Voice, ’12) and Yi Li (AD Opera, ’13) in 2014 and Thomas Richards (MM Voice, ’13) in 2013. At least two CCM singers advanced to the Upper Midwest Regional Auditions in this year’s Met National Council Auditions: artist diploma students Amber Monroe and Teresa Perrotta.

In addition, CCM Opera productions have received some of the National Opera Association Production Competition’s highest honors throughout the years, taking home six of the 18 non-professional prizes awarded in 2010 and four prizes in 2011.

CCM Opera is also part of Opera Fusion: New Works, a dynamic partnership with Cincinnati Opera that offers composer/librettist teams the opportunity to workshop an opera during a 10-day residency in Cincinnati.

Created in 2011 to foster the development of new American operas and generously funded by The Andrew W. Mellon Foundation, Opera Fusion: New Works has grown into a nationally recognized collaboration which is not only advancing the repertoire, but also serving as an inspiring example of a successful joint venture between an educational institution and a professional performing arts organization.

For more information about CCM, please visit us online at ccm.uc.edu.

CCM is delighted to announce that first-year artist diploma student Teresa Perrotta (MM Voice, ’19) reached the finals of the Lotte Lenya Competition, one of the most prestigious vocal competitions for young artists. 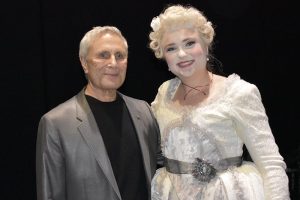 Composer John Corigliano and Teresa Perrotta at the French premiere of “The Ghosts of Versailles.” Photo/Gail Luna

A rising soprano, Perrotta won the Seybold-Russell Award at CCM’s 2019 Opera Scholarship Competition and advanced to the Upper Midwest Regional Auditions in this year’s Metropolitan Opera National Council Auditions. In December 2019, she made her international debut as Marie Antoinette in the French premiere of John Corigliano’s The Ghosts of Versailles at the Château de Versailles Royal Opera. She studies with CCM Voice Professor Gwendolyn Coleman.

Perrotta is one of 12 finalists in the 2020 Lotte Lenya Competition. These finalists were selected out of 282 applicants from 24 states after a preliminary video round and a semi-finals round in New York City. The finals were initially scheduled for May 2 at the Eastman School of Music, but the Kurt Weill Foundation, which holds the competition, is exploring other options in light of the current global health crisis. 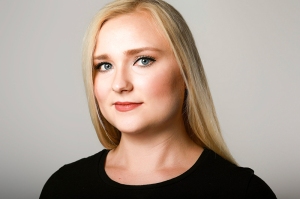 About the Lotte Lenya Competition

More than a vocal competition, the Lotte Lenya Competition recognizes talented young singer/actors who are dramatically and musically convincing in repertoire ranging from opera/operetta to contemporary Broadway scores, with a focus on the works of Kurt Weill. Since its inception in 1998, the Lotte Lenya Competition has grown into an internationally recognized leader in identifying and nurturing the next generation of “total-package performers” (Opera News) and rising stars in both the opera and musical theater worlds. The roster of prizewinners has likewise grown to over 100, many of whom have gone on to major performing careers. Visit kwf.org for more information about the Kurt Weill Foundation or the Lotte Lenya Competition.

Are you ready to apply to UC? In celebration of applications opening for fall 2022, UC is waiving the application fee for all undergraduate students that submit their application on Sunday, Aug. 1. To get started, visit uc.edu/apply #bearcatsbound
Let’s welcome Matt JC Welsh, an incoming orchestral conducting student from Atlanta, GA! #CCMwelcome21
Cincinnati has many amazing murals, but one of our favorites is right here in CCM. Located in the main stairway in CCM’s Mary Emery Hall is a mural originally designed by DAAP alum Lori Seibert. It was originally on display in the CCM Café (which is now Starbucks). The mural was reinstalled to help celebrate CCM’s 150th anniversary in 2017-18.
Give a warm welcome to Emily Grace Jordan, an incoming Jazz Studies student! #CCMwelcome21
ICYMI CCM and Cincinnati Playhouse in the Park partnered to share new audio plays for theatre lovers everywhere! Listen on the CCM website or Playhouse’s website (cincyplay.com)
Let’s welcome incoming Music Education student Mason Deitsch! #CCMwelcome21
#CCMstars Victoria Okafor (MM Voice, ‘21) and Max Chernin (BFA Musical Theatre, ‘12) compete in the final round of the Lotte Lenya Competition on August 28!! They were chosen to advance to the final round of 15 vocalists out of a record applicant pool of more than 500 singers!
Welcome incoming Musicology student Jerika O’Connor Hayes! #CCMwelcome21
“Hope After Hate” shares a story of struggle and survival during the Holocaust with lessons to inspire action against acts of hatred and bigotry today. Watch the play on CCM’s website and YouTube channel (link in bio).
Let’s welcome incoming Double Bass student Brooks Taylor! #CCMwelcome21
Welcome incoming Lighting Design and Technology student, Baron Leon!!
CCM Commercial Music Production alum Bryard Huggins recently released a new album to celebrate the 10th anniversary of his debut record. Featuring contemporary jazz, smooth jazz and jazz fusion, the new album shares 9 new songs — and a cover of Selena’s hit “I Could Fall In Love!”
Let’s welcome Julia Kay Bobell, an incoming Master of Music student in Oboe. #CCMwelcome21
Meet the next class of @cincysymphony + CCM Diversity Fellows! The program’s tagline — Bravos Without Barriers — gets to the heart of its mission: eliminating obstacles that can prevent extraordinary musicians from achieving their full potential.
Everyone give a warm welcome to DiDi Elisabeth Turley, an incoming MA/MBA Arts Admin student!! Follow along this summer as we introduce you to students who will be joining us this fall. #CCMwelcome21
Loading Comments...
%d bloggers like this: