Audrey Luna (center) as Ariel in the Metropolitan Opera’s production of ‘The Tempest.’

Congratulations to CCM alumna Audrey Luna (MM ’03, AD ’05), soprano, on her Grammy win last night! Luna received a Grammy for Best Opera Recording for singing the role of Ariel on the Metropolitan Opera recording of Thomas Adès’ The Tempest.

Born in Salem, Oregon, the soprano studied with Barbara Honn during her time at CCM. You can read more about her Grammy win courtesy of Janelle Gelfand and the Cincinnati Enquirer here. 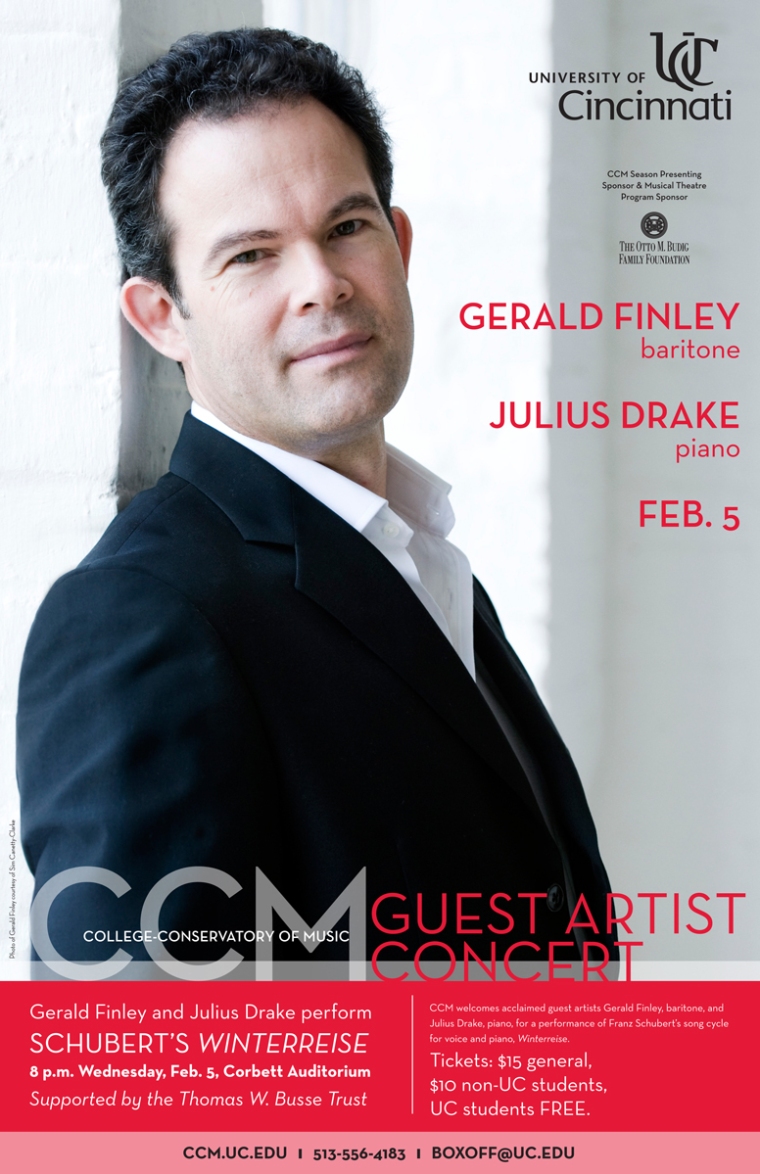 Below, watch Finley and Drake discuss the power and beauty of Winterreise. Tickets for their Feb. 5 performance are on sale now.

We are happy to report that mezzo-soprano Sofia Selowsky is the Central Region Winner of the Metropolitan Opera National Council Auditions.

A Master of Music candidate studying with CCM Professor of Voice William McGraw, Selowsky will compete in the Semi-Final Auditions on March 23, 2014.

You can learn more about the Met’s 2013-2014 National Council Audition Results here.

Hear the opera stars of tomorrow compete for a chance to “win the Met,” and kick-start a major career at the Metropolitan Opera District Council Auditions for the Southern Ohio district on Saturday, Oct. 5. CCM hosts these Southern Ohio Auditions from 10 a.m. – 6 p.m. in CCM’s Robert J. Werner Recital Hall. Audiences have the opportunity to attend this event for free and sample operatic selections throughout the day.

Each year, North America’s most promising new opera talent begin their journey to the fabled stage of the Metropolitan Opera at Lincoln Center in New York during these regional auditions. The Metropolitan Opera holds National Council Auditions throughout the country and Canada in order to discover promising young singers, give singers from around the country a chance to be heard by the major opera companies of the United States and Canada, and find potential participants for the Lindemann Young Artist Development program, an opera training program sponsored by the Met.

The University of Cincinnati College-Conservatory of Music (CCM) is delighted to announce its fall schedule of major events. The largest single source of performing arts events in the state of Ohio, CCM presents more than 120 major public performances from Sept. 4 through Dec. 14, ranging from faculty and guest artist concerts to fully supported opera, musical theatre, drama and dance productions.

View a digital copy of CCM’s Fall 2013 Calendar Booklet today by visiting on.uc.edu/CCMFall2013. Refer to the listings below for more details.

Event Information
All events listed here will take place in CCM Village on the University of Cincinnati campus unless otherwise indicated. Admission is free to many CCM performances, although some events do require purchased tickets or reservations. Please see individual event information for details and ordering information.

All event dates and programs are subject to change. Visit ccm.uc.edu  or contact the CCM Box Office at 513-556-4183 for the most current event information. 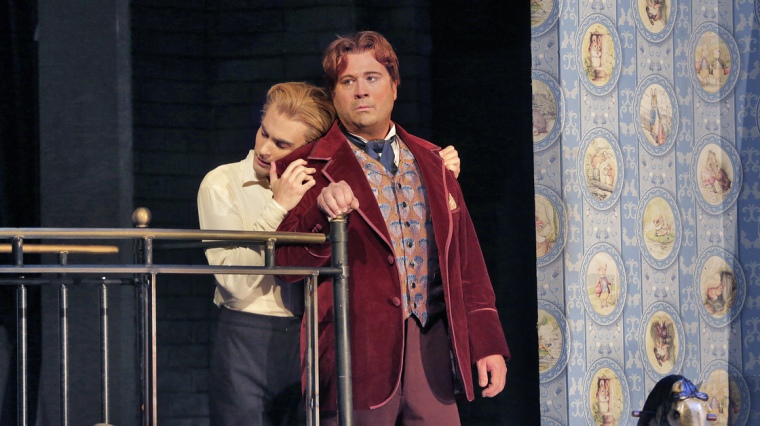 Countertenor David Daniels (right) and dancer Reed Luplau in the Santa Fe Opera’s world-premiere production of Oscar, based on the life of Oscar Wilde.

Acclaimed countertenor and CCM alumnus David Daniels (BM, 1990) was the topic of discussion on NPR’s Morning Edition today, as Renée Montagne and Miles Hoffman previewed Theodore Morrison’s new opera Oscar, which premieres Saturday at the Santa Fe Opera with Daniels in the title role. Based on the life of Irish writer and poet Oscar Wilde, Morrison wrote Oscar specifically for Daniels.

You can listen to the entire broadcast here.

A 2012 Opera News Awards recipient, Daniels returned to CCM last September for a master class. He sang the title role in the Metropolitan Opera’s new production of Giulio Cesare earlier this year. 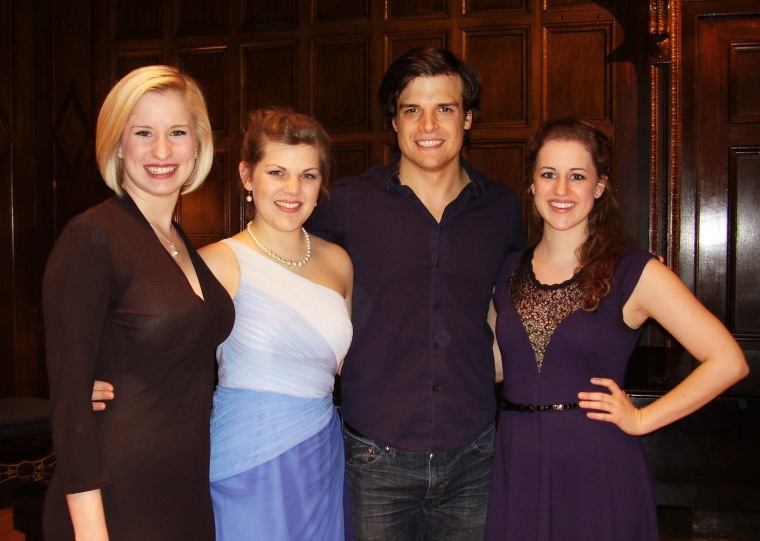 We are delighted to announce that graduating CCM student Lauren Roesner (BFA Musical Theatre, 2013) has been named a winner of the 2013 Lotte Lenya Competition. The soprano was awarded third prize in the prestigious international theater singing contest during the final round of the competition on Saturday, April 13. Congratulations Lauren!

The Kurt Weill Foundation for Music, which sponsors the competition, distributed a record $61,500 in prizes this year. Roesner received a third prize of $7,500. CCM alumna Heather Phillips, soprano, was also a finalist in the competition and received an award of $1000.

Several other current and former CCM students were awarded special prizes during this year’s competition. Learn more about those awards here.

You will find something for everyone on the CCM stage this weekend!

At 8 p.m. this evening (Friday, April 12), the CCM Wind Orchestra closes out its successful 2012-13 season with a survey of contemporary American composers. The eclectic program will include works by Samuel Barber, Warren Benson and more! Learn more about this performance here.

CCM welcomes acclaimed tenor Lawrence Brownlee to the stage at 8 p.m. this Saturday, April 13, for an encore performance of the program from his recent Carnegie Hall debut. Brownlee will be accompanied by composer, conductor and pianist Damien Sneed for this special performance. Learn more about this performance here.

CCM’s Jazz Ensemble and Jazz Lab Band will celebrate the impact of adjunct instructor of jazz drums and “living guru of big band drumming” John Von Ohlen with a swinging tribute concert at 4 p.m. on Sunday, April 14. Learn more about this performance here.

CCM presents a special recital by tenor Lawrence Brownlee at 8 p.m. on Saturday, April 13, in Corbett Auditorium. This performance is presented by the CCM Busse Fund. Tickets are on sale now.

Brownlee will be accompanied by composer, conductor and pianist Damien Sneed, whose spiritual arrangements will be featured on the program. In addition, Brownlee will sing works from the 19th and 20th centuries, including music by composers Giuseppe Verdi and Francis Poulenc. Brownlee recently performed the same program at his Carnegie Hall debut, accompanied by pianist and conductor Martin Katz, with whom he recorded an album of Italian songs under EMI Classics in 2006.

Originally from Youngstown, Ohio, Brownlee has had a quick rise to sought-after status as an operatic tenor. Since graduating from the Indiana University Jacobs School of Music in 2001, he has won the Metropolitan Opera National Council Auditions and received the Richard Tucker Award and Marian Anderson Award. Brownlee has taken the stage with some of the world’s top opera companies including the Metropolitan Opera, Teatro alla Scala, Royal Opera House, Hamburg State Opera and Opéra National de Paris. In addition to his EMI Classics release of Italian songs, he is featured on EMI’s release of Rossini’s Stabat Mater and on the Metropolitan Opera’s Met in HD recording of Rossini’s Armida, both from 2010.

CCM alumnus David Daniels (BM, 1990) is profiled in the April issue of Opera News, which is on newsstands now. As previously reported, the acclaimed countertenor is a 2012 Opera News Award-winner.

In the lengthy profile, Opera News editor Adam Wasserman writes, “Daniels has the uncanny ability to bridge the gap and make us believe that the composer’s note barely had time to dry on the page before it came forth from his mouth. It seems to me that the highest compliment one can pay Daniels — now in the third decade of an unprecedented career in opera — is that the music he sings sounds both strikingly contemporary and as though it were written precisely for his voice.”

Daniels will be singing the title role in the Metropolitan Opera’s new production of Giulio Cesare this month. The production is scheduled to be broadcast as a part of the Met’s “Live in HD” Series on April 27, 2013.