This prize includes £15,000 (about $18,400 in U.S. currency) and the guarantee of a professional role at a top international opera house. The members of the deciding jury included opera legends Sumi Jo, Sir Thomas Allen and Dame Felicity Lott, as well as other industry professionals.

Nelson recently made his European debut with the Norwegian premiere of Debussy’s Pelléas et Mélisande at the Norwegian National Opera. His performances were well-reviewed, despite his having learned the role in just four weeks. Bachtrack.com said that “Nelson impressed with a ringing baritone, excellent French diction and a surprisingly easy top [register].”

This season, Nelson appears with Opera Theatre of Saint Louis as Dr. Falke in Die Fledermaus, Vancouver Opera as Figaro in The Barber of Seville, with San Francisco Opera as Bosun in Billy Budd and with the Saint Louis Symphony in Vaughan Williams’ Dona Nobis Pacem. Read more about Nelson’s professional accomplishments.

We are thrilled to report that CCM-trained tenor Stuart Skelton has been named male singer of the year at the 2014 International Opera Awards!You can view the full list of this year’s award recipients here.

As previously reported, both Skelton and alumna Joélle Harvey were announced as finalists this year.

The mission of the International Opera Awards is to promote excellence in international opera and provide funding for the operatic community through the Opera Awards Foundation. You can learn more about the awards by visiting www.operaawards.org.

We are delighted to report that CCM alumni Stuart Skelton (MM ’95) and Joélle Harvey (BM ’07, MM ’09) have been named 2014 International Opera Award finalists!

Please note the following updates to CCM’s schedule of major events for the spring:

You can always find the most up-to-date information on CCM’s calendar of events at ccm.uc.edu.

CCM is delighted to announce its spring schedule of performances. The largest single source of performing arts events in the state of Ohio, CCM presents more than 100 major public performances from Jan. 12 through May 19, ranging from faculty and guest artist concerts to fully supported opera, drama and musical theatre productions.

Event Information
All events listed below take place in CCM Village on the campus of the University of Cincinnati unless otherwise indicated. Admission is free to many CCM performances, although some events do require purchased tickets or reservations. Please see individual event information for details and ordering information. 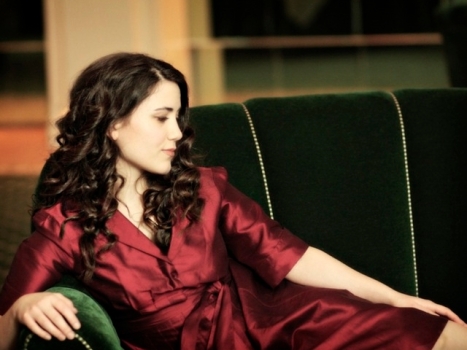 A native of Bolivar, New York, Harvey is the recipient of a 2011 First Prize Award from the Gerda Lissner Foundation, a 2009 Sara Tucker Study Grant from the Richard Tucker Foundation and a 2010 Encouragement Award (in honor of Norma Newton) from the George London Foundation.

While at CCM, Harvey performed the roles of Amor in Cavalli’s L’Egisto, Emmie and Flora in, respectively, Britten’s Albert Herring and The Turn of the Screw, Poppea in The Coronation of Poppea, Sophie in Massenet’s Werther, and Nannetta in Falstaff. She continues to study with CCM Professor of Voice Karen Lykes.

You can read the full interview here.

CCM welcomes alumnus David Daniels (BM, 1990) back to campus for a master class from 3–5 p.m. this Friday, Sept. 28, in UC’s Robert J. Werner Recital Hall. This master class is free and open to the public. Reservations are not required. 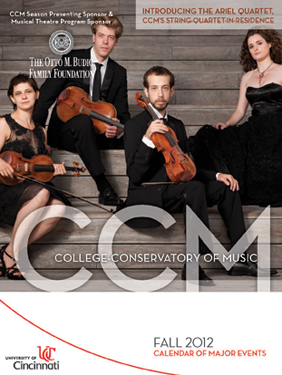 CCM is delighted to announce its fall schedule of performances. The largest single source of performing arts events in the state of Ohio, CCM presents more than 100 public performances this fall, ranging from faculty and guest artist concerts to fully supported opera, drama and musical theatre productions.

This fall’s schedule includes a Beethoven Festival (Sept. 14 – Oct. 12), a Kurt Weill Festival (Oct. 19 – March 10) and a Cage Centennial Celebration (Nov. 5 – Nov. 29). CCM also collaborates with Cincinnati Opera on public workshop performances of two new American operas (Oct. 27 – 28 and Dec. 4 – 5) and presents a pair of concerts in conjunction with the Constella Festival of Music and Fine Arts (Oct. 10 and Oct. 28).

Download a digital copy of CCM’s Fall 2012 Calendar of Major Events today. Physical copies are also available at the CCM Box Office in the Corbett Center for the Performing Arts.

Earlier this week, the editors of Opera News announced the honorees for the 2012 Opera News Awards. We are delighted to report that this year’s winners include CCM alumnus countertenor David Daniels (BM, 1990).

Six CCM voice students were named winners of CCM’s 2011 Opera Scholarship Competition, which was held Saturday, April 2 in CCM’s Corbett Auditorium. The annual competition welcomes current and incoming CCM voice students to compete for scholarships and cash prizes, and a panel of judges composed of opera industry professionals selects each year’s class of prizewinners. See the full list of 2011 winners after the jump.