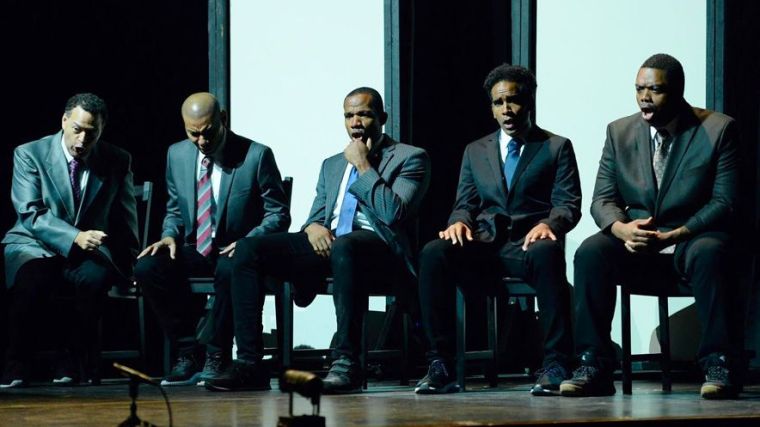 Composed by Davis with a libretto by Richard Wesley, the opera was described by the jury of the prestigious award as, “a courageous operatic work, marked by powerful vocal writing and sensitive orchestration, that skillfully transforms a notorious example of contemporary injustice into something empathetic and hopeful.”

The Central Park Five’s musical style combines elements of jazz, hip-hop, blues and other historically African-American genres. The opera centers on the five African American and Latino teenagers who were unjustly convicted of a Central Park assault in the 1980s, but were exonerated through DNA evidence 13 years later.

CCM audiences may remember Dunner from his recent appearance on campus. In October 2019, Dunner returned to CCM to conduct the Philharmonia in its “CSI Halloween: Post-Mortem” performance. While on campus, Dunner connected with CCM conducting students over dinner and worked with them in studio class as well as in rehearsals to prepare for the performance.

Dunner began rehearsals for The Central Park Five shortly after his teaching and conducting work at the Interlochen Arts Academy ended for the 2018-19 school year. In an interview for Interlochen’s website, Dunner commented on the importance of telling the stories and struggles of black Americans through the lens of opera.

For Dunner, the story of the Central Park Five is very personal. “I grew up in the area where all of this took place,” Dunner tells Interlochen. “I lived eight blocks away. I used to go to that part of Central Park as a kid. All of what went on during that time I have been through.”

From the Central Park Five to today’s #BlackLivesMatter movement, stories of cultural, racial and socio-economic injustices regularly make headlines across the country. “The cycle is still being perpetuated,” Dunner tells Interlochen. “What happened to them should not be happening anymore. Yet it is still happening. That is the relevance. That’s why this was important.”

One month after Dunner led the world premiere of The Central Park Five at Long Beach Opera, another opera focused on wrongful convictions premiered at Cincinnati Opera. The stories of six people who were wrongfully imprisoned and then freed were told in Blind Injustice, a collaboration with CCM, UC’s Ohio Innocence Project (OIP) and the Young Professionals Choral Collective. Based on casework by the OIP and the book “Blind Injustice” by UC law professor and OIP Director Mark Godsey, the highly acclaimed opera was directed by CCM Professor of Opera Robin Guarino and featured several current and former CCM students in the cast.

Efforts to share diverse stories through the performing arts is not limited to tales of wrongful convictions and struggle. In February, Dunner conducted the Toledo Symphony in a program that highlighted classical musicians of color. Selections included excerpts from Nkeiru Okoye’s opera Harriet Tubman: When I Crossed That Line to Freedom, Duke Ellington’s The River Suite, André Previn’s Honey and Rue and William Grant Still’s Symphony No. 1, among other pieces. As Music Director and Interim Artistic Director of Chicago’s South Shore Opera, Dunner furthers the company’s mission to provide greater opportunities for professional artists of color, especially local black artists, in performances of classic and contemporary operas.

The concert begins with the classic staging of the famous pas de deux from Le Corsaire, staged by CCM Associate Professor of Dance Deirdre Carberry. Set to music by Adolphe Adam, who also wrote the popular ballet Giselle and the Christmas song “O Holy Night,” the pas de deux is one of the most beloved selections in the entire ballet cannon. “This dance is so grand and virtuosic. It really starts off the concert by showing the audience who we are as a program,” explains Andre Megerdichian, an Assistant Professor of Dance at CCM and the director of this year’s Fall Dance Concert.

On the heels of this classic start comes the largest and most collaborative performance of the night, Night’s Daughters, which is an original collaboration by Megerdichian and CCM Drama visiting faculty member Giles Davies. The piece explores the consequences of betrayal, but in a unique way, “Usually stories of betrayal are told from the perspective of the one betrayed, but this story is told from the perspective of the one who commits the act and details how one puts themselves back together afterward,” says Megerdichian.

Joining the dancers on stage will be a drummer, a Shakespearean actor and the quirky harp duo Beyond Pluck, who are quickly making a name for themselves thanks to their classic rock covers for the harp. “Beyond Pluck members Rachel Miller and Paula Bressmen are adventurous and were really excited to create this with us,” says Megerdichian. Usually understood to be stationary instruments, the harps in Night’s Daughters will move around the stage on custom-built platforms and are an integral part of the piece’s movement.

Diego Salterini, founding co-director of Dance Now! Miami, choreographs the third work, Themes and Variations. The Interlochen and Joffrey Ballet faculty member created the work specifically for CCM, which features dancers on pointe, but with a twist, “It’s not traditional ballet by any means, it’s far more contemporary with a jazzy element to it,” explains Megerdichian.

To end the show with a bang, the department presents the incredibly athletic and strenuous iconoGlass, which features music by the renowned composer Philip Glass. Choreographed by David Hochoy, artistic director of the Indianapolis-based company Dance Kaleidoscope, the work premiered in 1998 with a cast that included Megerdichian himself as one of the featured dancers. “I remember being completely exhausted after this piece, so it’s an amazing challenge for our dancers,” says Megerdichian.

The 2015 Fall Dance Concert is a collection of varied and exciting works that will showcase the unbelievable versatility of the students in CCM’s Department of Dance.

Purchasing Tickets
Tickets to the “Fall Dance Concert” are $15 for general admission, $10 for non-UC students and FREE for UC students with valid ID.

Tickets can be purchased in person at the CCM Box Office, over the telephone at 513-556-4183 or online at ccm.uc.edu/boxoffice/concerts/dance.