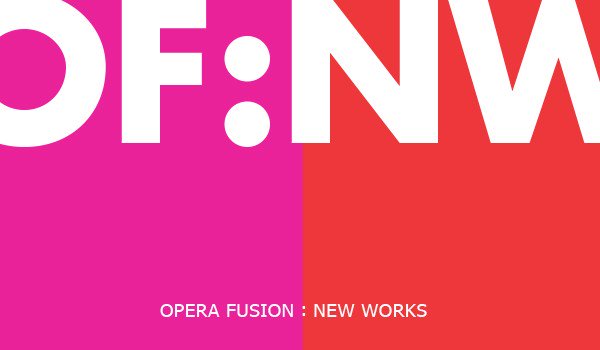 CCM and Cincinnati Opera’s Opera Fusion: New Works program presents excerpts from the new American opera Some Light Emerges at 7:30 p.m on Thursday, Sept. 22, in the Cincinnati Club’s Oak Room. This free public performance provides audience members with a rare behind-the-scenes look at the creation of an original work! Tickets are available now though the Cincinnati Opera box office by calling 513-241-2742 or visiting cincinnatiopera.org. 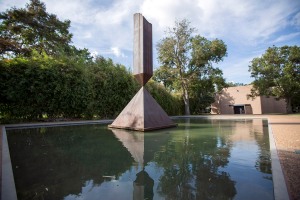 The Broken Obelisk outside of the Rothko Chapel.

Opera Fusion: New Works is currently providing a workshop for Some Light Emerges, which is composed by Laura Kaminsky to a libretto by Mark Campbell and Kimberly Reed. Inspired by the creation of Houston’s iconic Rothko Chapel by philanthropist and art collector Dominique de Menil, the opera is commissioned by HGOco, Houston Grand Opera’s community collaboration and education initiative. The chamber opera will have its world premiere in Houston in March 2017. The Cincinnati workshop is directed by Robin Guarino, CCM’s J. Ralph Corbett Distinguished Chair, and conducted by Bradley Moore, Houston Grand Opera’s head of music staff and music director for HGO Studio.

In the mid-1960s, the renowned art collector Dominique de Menil commissioned the noted American artist Mark Rothko to create a series of paintings and the ideal gallery in which to house them. Mrs. de Menil also envisioned that the resultant Rothko Chapel, which opened in 1971, would serve as a spiritual space for “those of all faiths, or no faith.” Some Light Emerges is set mostly within the Rothko Chapel and chronicles the direct and tangential intersections of five people across four decades who visit the chapel, as well as the struggles and triumphs of Dominique de Menil in realizing her dream.

Opera Fusion: New Works will also workshop Intimate Apparel, a new American opera by composer Ricky Ian Gordon with a libretto by Lynn Nottage, from November 5 to 14, 2016. The new opera is commissioned by the Metropolitan Opera/Lincoln Center Theater’s New Works Program. The workshop will be directed by Guarino and conducted by Timothy Myers, the artistic and music director of North Carolina Opera. Paul Cremo, dramaturg and director of opera commissioning programs for the Metropolitan Opera, will be the dramaturg for the workshop. This residency will culminate in a free public performance of excerpts in Cincinnati at 7:30 p.m. on Monday, Nov. 14,  in the Cincinnati Club’s Oak Room. Tickets are available beginning Tuesday, November 1 through the Cincinnati Opera box office.

About Opera Fusion: New Works
Funded by a generous grant from The Andrew W. Mellon Foundation, Opera Fusion: New Works is a groundbreaking joint program of Cincinnati Opera and the University of Cincinnati College-Conservatory of Music created in 2011 to foster the development of new American operas. The program offers composers or composer/librettist teams the opportunity to workshop an opera during a 10-day residency in Cincinnati, utilizing the talent, personnel and facilities of both organizations. The workshops are cast with a combination of CCM students and professional artists, and each workshop concludes with a public performance. The program is led by co-artistic directors Marcus Küchle, Director of Artistic Operations of Cincinnati Opera, and Robin Guarino, the J. Ralph Corbett Distinguished Chair of Opera at CCM. In 2015, The Andrew W. Mellon Foundation renewed the program’s funding, allowing for a second cycle of six workshops over three years.

Reserving Tickets
Admission to Some Light Emerges is free, but reservations are required. Please contact the Cincinnati Opera box office for tickets by calling 513-241-2742 or visiting cincinnatiopera.org.
____

We are thrilled to report that CCM alumna and former faculty member Marie Speziale (BM, 1964) will be presented with a Pioneer Award at the International Women’s Brass Conference (IWBC) at 7:30 p.m. on Wednesday, June 4, at Northern Kentucky University’s Greaves Hall.

Acknowledged as the first woman trumpeter in a major symphony orchestra, Speziale served as Associate Principal Trumpet with the Cincinnati Symphony Orchestra for 32 years, from 1964 until her retirement in November of 1996. At this year’s conference, she will be honored as a musician whose career and spirit exemplifies the goals and traditions of the IWBC. Congratulations!

At each IWBC, beginning with the first in 1993, the IWBC has recognized women who have been pioneers in the top levels of brass performance, breaking down barriers and living their lives effecting change for those who followed. A full list of past award recipients may be found on the IWBC web site at myiwbc.org/about/iwbc-pioneers.

We are thrilled to report that CCM alumnus Craig Kier (MM, 2001) has been appointed Director of the Maryland Opera Studio at the University of Maryland School of Music. The former Associate Conductor and Assistant Chorus Master with the Houston Grand Opera, Kier will join the UMD School of Music faculty this fall.

“We are delighted that Craig Kier will be joining our faculty as Director of the Maryland Opera Studio,” says UMD School of Music Director Robert Gibson. “His professional work as conductor, coach, accompanist and administrator in the opera world provides an ideal combination of skills and experience for the leadership of our program. Craig’s vision for the future of the MOS is strongly aligned with the teaching philosophy and values of the program that have made The Maryland Opera Studio one of the most respected programs in the nation for training young singers who wish to enter the professional opera world in the US and abroad.”

You can view the UMD School of Music’s official announcement online here. 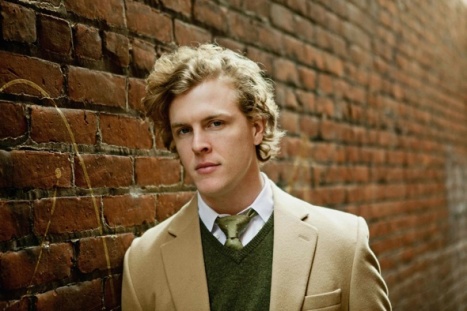 Congratulations to Mark Diamond on being named the winner of a Sara Tucker Study Grant yesterday morning (April 12), carrying with it a $5,000 cash prize. The award came after two days of auditions by some of America’s finest young opera singers in New York City. Diamond is currently in the Houston Grand Opera‘s young artist program, one of the best programs in the world. Last year, he took first place in the Houston Grand Opera‘s 23rd Annual Eleanor McCollum Competition for Young Singers.

Diamond participated in CCM’s Master of Music program in vocal performance, where he studied with William McGraw.

Congratulations to first-year Artist Diploma candidate Yi Li for being named “New Artist of the Month” by Musical America! Each month, Musical America spotlights an important emerging talent with an in-depth profile. You can view Li’s profile here.

Each summer, this fund will sponsor one incoming Merola artist: either an Asian/Pacific artist or a mezzo-soprano. In addition to covering the artist’s training and housing costs, the Zheng Cao Fund will provide the additional funding needed to cover visa and travel costs associated with bringing an Asian/Pacific artist to San Francisco.

Jennifer Jolley, a DMA student in CCM’s Composition Department, claimed honors from both the judges and audience in The Atlanta Opera’s 24 Hour Opera Project. Jolley’s ten-minute opera, Krispy Kremes and Butter Queens, with a libretto by Vynnie Meli, was written in twelve hours Friday night and early Saturday morning, and performed to a standing room only crowd in Atlanta Saturday night.

As previously reported, Jolley and fellow CCM student Jonathan Stinson were two of just five composers selected from across the country to compete in the competition. 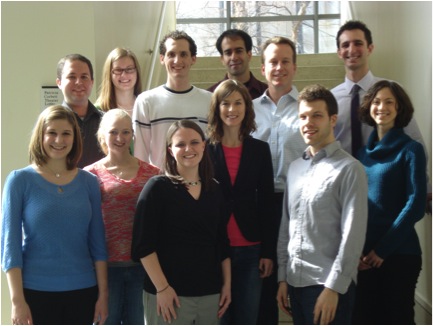 CCM’s Arts Administration students are posed each year with the challenge of finding an internship for the summer as part of their graduate degree. Based on the wealth of knowledge these students have gained in their studies, the students of the Class of 2012 have earned summer spots with the leading arts organizations in their fields of interest. Each student’s strong basis of understanding, stemming from dual-degree coursework in UC’s College of Business and CCM Arts Administration, assisted in earning these highly competitive internships.

The program has consistently prepared its students for real world experience, as is represented by the 100% job placement of last year’s graduating class! Throughout the country (and abroad!) this summer, CCM will be well represented by the Arts Administration students.