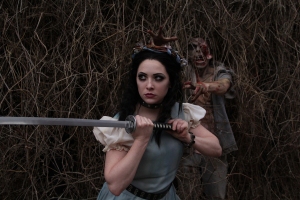 CCM’s acclaimed Studio Series comes to a dramatic conclusion with a thrilling production of the irreverent Shakespearean zombie mash-up Living Dead in Denmark, playing April 17-19 in CCM’s Cohen Family Studio Theater. Admission is free, but reservations are required. CCM’s very own resident Fight Director and Professor of Drama k. Jenny Jones directs this can’t-miss production, which is intended for mature audiences.Written by Qui Nyguen, a founding father of the OBIE Award-winning “geek theatre” company the Vampire Cowboys, Living Dead in Denmark is described as the “perfect storm of horror and geek obsessions” by Time Out New York. The action of the play is set five years after the tragic events of Shakespeare’s Hamlet, as a resurrected Ophelia, Juliet and Lady Macbeth must save Denmark from an overwhelming zombie horde.First staged in 2006, the play has been hailed by the New York Times as “a crazy quilt of pop reference, dueling blades and scattershot anachronisms,” with figures from both Shakespeare’s canon and the 21st century pop cultural zeitgeist making appearances. This entertaining and comical zombie drama is sure to be the perfect antidote to exam week blues! 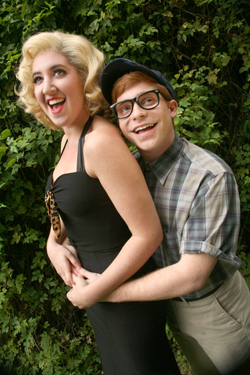 Cassie Levine as Audrey and Lee Slobotkin as Seymour in CCM’s Studio Series production of ‘Little Shop of Horrors.’ Photography by Nik Robalino.

CCM proudly presents the award-winning Little Shop of Horrors as the first installment in this year’s Studio Series. UC’s Cohen Family Studio Theater will be transformed into an iconic drive-in movie theater for this much-loved musical, which runs Oct. 11-13, 2012.