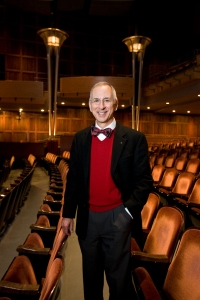 CCM celebrates the retirement of Professor Terence Milligan with a series of special events beginning at 7 p.m. on Saturday, April 5. The CCM Wind Ensemble, the UC Bearcat Band, alumni members of Phi Alpha Sinfonia and other special guests will take part in the celebrations, which are free and open to the general public.

The pre-concert festivities begin at 7 p.m. with a pre-concert performance by the UC Bearcat Band in the CCM plaza. Milligan directed the Bearcat band from 1979-1992 and remains close friends with many of the band’s alumni.

A meet and greet in CCM’s Baur room will follow the Bearcat Band performance, culminating in the brass and percussion ensembles performing a special fanfare in the Corbett Center Atrium.

The concert will begin at 8:15 p.m. in Corbett Auditorium, featuring the Wind Ensemble, which will perform six different pieces, each holding a special meaning for Professor Milligan.