Hollywood feature film editor and CCM Electronic Media alumnus Elliot Greenberg (BFA 2001) returns to CCM this week to talk to current students about his own journey in the film and television business. His master class will take place at 12:30 p.m. this Friday, Feb. 23, 2018 in CCM’s Mary Emery Hall Room 3250. 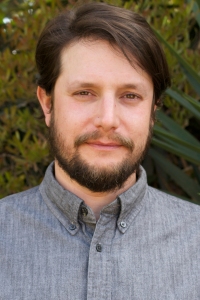 Greenberg recently finished work on the six-part TV miniseries Waco for the Paramount Network. The series is based on the 1993 Waco, Texas siege and marks Greenberg’s first time editing for television.

The process of cutting a six-hour miniseries brought many new challenges to the seasoned feature film editor — who has previously worked with Waco creators John Erick and Drew Dowdle on such movies as The Poughkeepsie Tapes, Quarantine, Devil, As Above, So Below and No Escape.

“Besides the technical challenges, the subject matter was the real challenge,” Greenberg says of Waco. “Telling the true story of this tragedy weighed heavy on me each and every day. To help bring it to life as part of an amazing team of filmmakers, actors and craftspeople has been a true honor and one I am very proud of.”

Greenberg visits CCM to give current students a look into what the film and TV business is like from the perspective of post-production editing work. He will talk to students about his own career, from breaking into the film industry and rising through the ranks to becoming the lead picture editor on feature films and TV shows.

“I hope that through my own journey, students will gain a better understanding of what it is like to work in Hollywood,” Greenberg says. “From someone who has been exactly where they are now, I hope to show them that getting to work at such a high level in the film/TV business is not as impossible as it might seem, and with a lot of hard work and determination they can achieve their careers goals no matter what the field.”

After graduating from CCM, Greenberg moved across the country to Los Angeles and started his career as a post-production assistant, training under director Wes Craven’s longtime editor Patrick Lussier on the films Cursed and Red Eye. He then moved on to work at View Askew Productions as the first assistant editor on Clerks II. His credits also include Chronicle, Escape Plan, Fantastic Four and To The Bone, which premiered at the Sundance Film Festival in 2017.

Greenberg remembers his time at CCM fondly. As a student, he won the Paramount Studio internship as part of E-Media’s annual Frederick W. Ziv Awards in 2001. He was also part of a group who produced a short film called Eastern Standard Time, which won a student Emmy Award.

“The award wasn’t what I remember most,” Greenberg says. “It was the late night after-hour editing sessions with E-Media Professor Kevin Burke that stuck with me. His mentorship is what gave us the belief we could pull this project off, and proved to me one of the cornerstones of my career — that we don’t work alone. Collaboration is what this business is all about. I am forever grateful to not only Professor Burke for this, but for all of my teachers at E-Media.”

You can see Greenberg’s most recent work in Waco. Episode four of the six-part series airs at 10 p.m. this Wednesday, Feb. 21 on the Paramount Network.