While movie audiences were gasping for the last few weekends, two CCM alumni were grinning. Not that the grads had morbid senses of humor, but they were appreciating the fact that their creative talents were partially responsible for Ben Affleck’s new thriller, Gone Girl, taking top box-office honors at $38 million during its Oct. 3-5 debut. Dawn Swiderski (BFA Theatre Design & Production, 1989) was the film’s art director and actor Cooper Thornton (MFA Dramatic Performance, 1992) played the role of Dr. Benson.

Affleck portrays a man whose beautiful wife goes missing on their fifth wedding anniversary. “ Under pressure from the police and a growing media frenzy, Nick’s portrait of a blissful union begins to crumble,” say Twentieth Century Fox’s promotional materials. “Soon his lies, deceits and strange behavior have everyone asking the same dark question.”

David Fincher directed the film, based upon Gillian Flynn’s bestseller.

Swiderski and Thornton both have a long list of movie and TV credits attached to their names. Some of Swiderski’s best known works are The Girl with the Dragon Tattoo, X-Men: First Class and Angels & Demons, starring Tom Hanks — a film in which the Art Directors Guild nominated her for best production design.

Thornton, known as Ray Thornton in college, is an actor, writer and producer, who is best known for his appearances on a variety of TV shows, including Parks and Recreation in the recurring role of Dr. Harris, “NCIS, NCIS: Los Angeles and House. 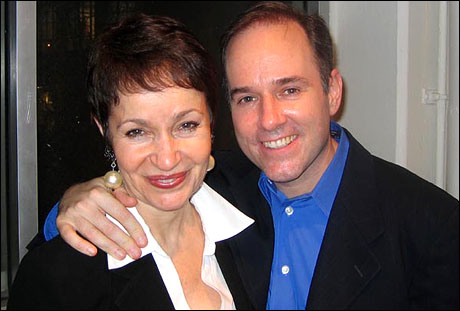 Flaherty, the Tony-winning composer of the Broadway musical Ragtime, composed the music for what is being called “the splashiest Kennedy Center production of the season.”

His lyricist partner Lynn Ahrens penned the lyrics and book for Little Dancer. In 1998, they both won Tony and Drama Desk awards for Best Original Musical Score for Ragtime. In 1991, they won the Best Musical Tony Award for Once on This Island.

Learn even more about this new musical via Deborah Rieselman and the UC Magazine.

Riva plays Lopez’s “tough and sexy” boss, as described in FX press materials. Her character, Concepcion, is the assistant principal at a downtown Los Angeles school, where she supervises Lopez teaching an evening history class — his way to give back to the community.

You can learn more about the program courtesy of the Cincinnati Enquirer here and courtesy of UC Magazine here.

Television viewers of the 2014 Winter Olympics in Sochi have a CCM alumnus to thank for the rousing theme music featured in NBC’s coverage of the games.

A prominent singer, songwriter, arranger and film scorer, Edelman has led a prolific career since concluding his studies at CCM and has regularly seen his film and television scores find a second life in NBC’s sports coverage. Below, you can listen to the closing credits soundtrack for NBC’s Olympics coverage, which features Edelman’s “World of the Heart” and “Finale.”

As the Los Angeles Times has previously reported, the heroic music used by NBC to promote upcoming Olympic competitions was originally the theme for the comedy-western television series The Adventures of Brisco County, Jr. You can view the original title sequence for that program (complete with Edelman’s score) below:

This theme has come to soundtrack NBC’s Olympic coverage for nearly 20 years and has also been used in the network’s coverage of Major League Baseball playoffs and other major sporting events.

A scene in the ring from the musical “Rocky.”

After more than a year of packed houses in Hamburg, Germany, Rocky: The Musical will soon open on Broadway, with a score composed by Stephen Flaherty (Composition, 1982), and his lyricist writing partner Lynn Ahrens. Tickets are already on sale for previews starting Feb. 11, 2014, at the Winter Garden Theatre and for an official opening on March 13.

Flaherty and Ahrens wrote 20 new songs for the show and retained three popular oldies: “Eye of the Tiger,” “Gonna Fly Now” and “Take You Back.” Because the story is set in Philadelphia in 1975, “the score combines a lot of sounds of the period — funk, soul, pop, rock and folk,” Flaherty says. “We look back to that time, but it is really a contemporary score.”

Of course, both producers had hoped to move the show to Broadway eventually and did so even though the German production is still packing houses to rave reviews more than a year later.

“It has been an amazing adventure,” Flaherty says. “Our international cast in Germany comes from 12 different countries, and our band features some of the best players I’ve ever worked with. I’m having the time of my life. Thank God for the ‘Basic German For Dummies’ app!” 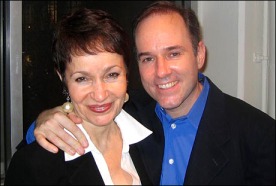 Flaherty and Ahrens have been writing popular musicals for 30 years, including two shows that won Tonys for best scores — Once on This Island in 1991 and Ragtime in 1998. The book for the latter was written by Terrance McNally, who won a Tony for his creation and who also wrote the book for Rocky.

In addition, Flaherty received a 2001 Drama Desk nomination for outstanding music for Seussical, which was originally scored for Broadway, later revised for a national tour, then revised again for junior-theater productions. For years, it has been one of the top three most-licensed properties in Music Theatre International’s licensing catalog.

You can learn more about Stephen Flaherty courtesy of UC Magazine.

Did you know that CCM alumnus Albert Hague (CCM, 42) composed “You’re a Mean One, Mr. Grinch” as an audition piece to win the job scoring the 1966 TV movie How the Grinch Stole Christmas?

UC Magazine‘s Deborah Rieselman interviewed Hague in 1997 and got the inside scoop on how this now-iconic song came together. You can read the 2001 feature article here.

When Jim Carrey made the story into a full-length feature film in 2000, Hague’s song and much of his score accompanied the movie, and he was listed in the credits.

In honor of the season, you can enjoy an excerpt from How the Grinch Stole Christmas below:

Hague was also well known for playing the role of Mr. Shorofsky, the music teacher, in the TV series Fame from 1982-87. In addition, his musical Plain and Fancy, a story set among the Amish of Pennsylvania, is performed all year long, and has been for decades, in Nappanee, Ind.

Saving Mr. Banks opens in movie theaters today to remind us how in 1962 Walt Disney turned the original Mary Poppins into something magical. But its magic continued to grow in the following half a century with each doll, storybook and set of branded building blocks that were created.

Perhaps its biggest spoonful of sugar might have been the 2006 Broadway opening of Mary Poppins the musical, starring CCM alumna Ashley Brown (BFA, 04) in the title role. All told, five CCM alumni appeared in the cast. 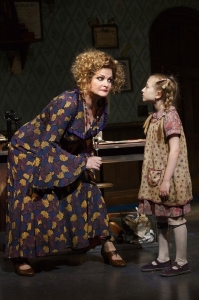 Until Jan. 5, 2014, Broadway audiences have a chance to catch four CCM alumnae in a Tony-nominated musical — the revival of Annie — plus one more if you wait at the back stage door to meet him after the show.

The biggest name of the group is Faith Prince, CCM ’79, HonDoc ’09, who co-stars as Miss Hannigan, the alcoholic matron at the orphanage. She joined the show at the Palace Theatre in the summer (2013).

The current revival of Annie was nominated for a Tony for Best Revival of a Musical. The show is expected to run through Jan. 5, 2014, after which a national tour will be launched.

You can learn more about these CCM alumni courtesy of UC Magazine.

CCM alumnus Travis Hagenbuch (BFA, 2007) was nominated for his fourth primetime Emmy award this year (ceremonies were held on Sept. 22).

Nominated in the category of “Lighting Design,” Hagenbuch has designed lighting for such live televised events as the Olympics, President Obama’s inaugural celebration, a Super Bowl halftime show with Tom Petty, the Academy Awards, the Grammy Awards, the Tony Awards, the Academy of Country Music Awards, BET Awards, as well as TV specials for Lionel Richie, Betty White’s 90th birthday and Celine Dion.

The three Emmys has won to date are for the Vancouver Olympics’ opening ceremony in 2010 and for two Grammy ceremonies in 2011 and 2012.

You can learn more about Travis Hagenbuch courtesy of UC Magazine.

Welcome incoming Musicology student Jerika O’Connor Hayes! #CCMwelcome21
“Hope After Hate” shares a story of struggle and survival during the Holocaust with lessons to inspire action against acts of hatred and bigotry today. Watch the play on CCM’s website and YouTube channel (link in bio).
Let’s welcome incoming Double Bass student Brooks Taylor! #CCMwelcome21
Welcome incoming Lighting Design and Technology student, Baron Leon!!
CCM Commercial Music Production alum Bryard Huggins recently released a new album to celebrate the 10th anniversary of his debut record. Featuring contemporary jazz, smooth jazz and jazz fusion, the new album shares 9 new songs — and a cover of Selena’s hit “I Could Fall In Love!”
Let’s welcome Julia Kay Bobell, an incoming Master of Music student in Oboe. #CCMwelcome21
Meet the next class of @cincysymphony + CCM Diversity Fellows! The program’s tagline — Bravos Without Barriers — gets to the heart of its mission: eliminating obstacles that can prevent extraordinary musicians from achieving their full potential.
Everyone give a warm welcome to DiDi Elisabeth Turley, an incoming MA/MBA Arts Admin student!! Follow along this summer as we introduce you to students who will be joining us this fall. #CCMwelcome21
You’ve rehearsed, studied, practiced, researched and performed at CCM for years, and now you’re ready to graduate!!! Congratulations to the Class of 2021. We are so proud of you.
Ever wonder what it’s like to do stunts in action films? Or how sex scenes on TV are directed? Listen to the latest episode of the School, Stage & Screen podcast to find out!
A new mural in the heart of Cincinnati’s Over-the-Rhine neighborhood features 19 UC alumni, including CCM alumna Betty Glover (BM Trombone, ‘44).
Start your week off with a new episode of our School, Stage & Screen #podcast 🎧. Episode 3 features alumna Diana Maria Riva, aka Detective Perez in Netflix’s “Dead to Me.”
Students: Opt-in now for a free, single-dose COVID-19 vaccine. Learn more: uc.edu/vaccine (link in bio).
Listen to Episode 1 of the new School, Stage & Screen podcast!! Titled “New G, O.G.” Alums Brian J. Leitten and Dylan Mulvaney go back and forth comparing their experiences in the industry, highlighting the years between them. You’ll also get a few tastes of interviews to come! Available on all of your favorite podcasting apps, and in our link in bio 🎉🎥🎬
The Hughes Project is tonight at 8:30 p.m./ 9 p.m./ 9:30 p.m!