Described by Opera News as “a shrewd dramaturge as well as a compelling composer,” Cipullo will spend three days in residence at CCM, coaching singers, pianists and instrumentalists from April 10-12, 2017.

Cipullo’s residency will culminate in a public performance featuring 26 of CCM’s stars-of-tomorrow. The concert’s program includes Cipullo’s Insomnia for vocal quartet and piano; The Husbands for soprano, baritone and piano; Late Summer for soprano and piano and the Entr’acte from Glory Denied for cello and piano, as well as other works. View full concert repertoire online here. 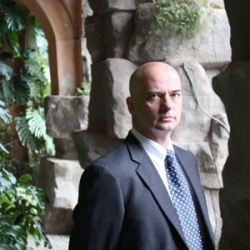 About Tom Cipullo
Hailed by the American Academy of Art and Letters for music of “inexhaustible imagination, wit, expressive range and originality,” composer Tom Cipullo is the winner of the 2016 Pellicciotti Opera Composition Prize from SUNY/Potsdam. He is also the recipient of a 2012 Guggenheim Fellowship, the 2013 Sylvia Goldstein Award from Copland House and the 2013 Arts & Letters Award from the American Academy.

Cipullo has received commissions from dozens of performing ensembles and singers, and he has received fellowships and awards from Yaddo, the MacDowell Colony, the Liguria Study Center (Italy), the Fundacion Valparaiso (Spain) and the Oberpfaelzer Kuenstlerhaus (Bavaria).

The New York Times has called his music “intriguing and unconventional,” and the Pittsburgh Post-Gazette has called him “an expert in writing for the voice.” Cipullo’s music is published by Oxford University Press and Classical Vocal Reprints and recorded on the Naxos, Albany, CRI, PGM, MSR, GPR, Centaur and Capstone labels.

Cipullo has composed orchestral works, solo piano pieces and a vast quantity of vocal music, including over 200 songs and several vocal chamber works. His song cycle Of a Certain Age won the National Association of Teachers of Singing (NATS) Art Song Award in 2008. Cipullo’s first opera, Glory Denied, has enjoyed numerous productions, and the Fort Worth Opera recording on Albany Records was cited by Opera News as among the best of 2014. Reviewers have hailed the work as “terrifically powerful… superbly written” (Fanfare), praising its “luminous score (Washington Post),” and noting “the dramatic tension was relentless (Opera News).” Cipullo’s second opera, After Life (libretto by David Mason), has been called “a finely wrought exploration of the role of art in times of grave crisis (Washington Post)” and “unfailingly inventive (Opera News).” Recorded on the Naxos label, After Life is the winner of the 2017 the Domenick Argento Chamber Opera Composition prize from the National Opera Association.

Cipullo received his Master’s degree in composition from Boston University and his B.S. from Hofstra University, Phi Beta Kappa with highest honors in music.

Admission
Admission to this performance is FREE. Reservations are not required.

Parking and Directions
Parking is available in the CCM Garage (located at the base of Corry Boulevard off Jefferson Avenue) and additional garages throughout the campus of the University of Cincinnati. Please visit uc.edu/parking for more information on parking rates.