CET Cincinnati Public Television will premiere the CCM Concert Orchestra’s recent performance Mahler’s Symphony No. 4 at 8:30 p.m. that evening on the CET Arts channel. This program is part of an  ongoing collaboration between CCM and CET, which will bring CCM’s world-class performances to PBS viewers throughout the Greater Cincinnati viewing area.

You can read more about this collaboration here.

Mahler’s Fourth from CCM was shot on location in CCM Village in March of 2013. The performance was part of CCM’s day-long Mahler Marathon, which was dedicated to the memory of loyal arts patron and UC alumna Louise Dieterle Nippert, who passed away in July of 2012 at the age of 100. A classically trained singer, Mrs. Nippert was a soloist in Mahler’s Symphony No. 4 with the Cincinnati Symphony Orchestra in 1957.

You can learn more about CCM’s Mahler Marathon here.

This Sunday, Sept. 22, we aim to top the spectacle of our Mahler Marathon with an epic concert production of Verdi’s grandest opera, Don Carlos. Learn more about that production here.

Congratulations to Marianna Prjevalskaya, Gold Medalist in the Artist Division of the 2013 World Piano Competition. Prjevalskaya receives $20,000, a recording deal with Fanfare Cincinnati and a debut recital in New York.

The entire finals concert was taped for future broadcast on CET Cincinnati Public Television. Stay tuned to this site for more information on the broadcast date!

Mark Gibson and the CCM Philharmonia. Photography by Dottie Stover.

CCM’s internationally-renowned Philharmonia Orchestra will be coming to a television near you this month courtesy of CET, Cincinnati Public Television. The CET Arts channel will premiere CCM’s Orchestra Series: Mahler’s Symphony No. 3 in D Minor at 8 p.m. on Monday, June 10.

This broadcast is part of an ongoing collaboration between CCM and CET, which will bring CCM’s world-class performances to PBS viewers throughout the Greater Cincinnati viewing area. CET Arts, which is celebrating three years on-air, brings the world stage to Greater Cincinnati and showcases the arts in our community.

Recorded in March, this performance was part of CCM’s day-long “Mahler Marathon,” which featured performances of Gustav Mahler’s Third and Fourth Symphonies and other selections by the CCM Philharmonia and Concert Orchestras. CCM Director of Orchestral Studies Mark Gibson conducted the entire “marathon” performance.

CET Cincinnati Public Television will premiere Monteverdi from CCM at 8 p.m. on Sunday, May 12, on the CET Arts channel. This program is part of an exciting new collaboration between CCM and CET, which will bring CCM’s world-class performances to PBS viewers throughout the Greater Cincinnati viewing area.

You can read more about this collaboration here.

You can learn more about the November performance here.

Monteverdi from CCM is scheduled to air on the CET Arts channel during the following times:

Janelle Gelfand provides an in-depth preview of CCM’s Mahler Marathon for the Cincinnati Enquirer. If you missed the feature in the Enquirer‘s Feb. 24 issue, you can find it online here.

CCM’s Concert Orchestra presents Mahler’s Symphony No. 4 in G Major, along with selections from his Des knaben Wunderhorn, at 4 p.m. on Saturday, March 2.

After a program break for dinner, the CCM Philharmonia will be joined by choirs from throughout the region at 8 p.m. for Mahler’s massive Symphony No. 3 in D Minor.

CCM’s Philharmonia and Concert Orchestras proudly present Gustav Mahler’s Third and Fourth Symphonies, along with other selections from the composer’s oeuvre, during a unique double-bill performance on Saturday, March 2, 2013.

This unique undertaking begins with a 4 p.m. performance by CCM’s Concert Orchestra, featuring selections from Mahler’s Des knaben Wunderhorn (The Youth’s Magic Horn), followed by his Symphony No. 4 in G Major.

At 8 p.m. that evening, the CCM Philharmonia will then present Mahler’s Symphony No. 3 in D Minor, his longest piece and the longest symphony in the standard repertoire.

Due to its length and the significant forces it requires, Mahler’s Symphony No. 3 is performed in concert far less frequently than his other symphonies, making this double-bill an especially rare feat. CCM Director of Orchestral Studies Mark Gibson conducts both symphonies.

“The Third and Fourth Symphonies of Mahler, based on the worldview and musical material from Des knaben Wunderhorn, outline the progress of humankind from earthly life to heavenly life,” Gibson explains. “I, along with 300 gifted student performers in our orchestras and choruses, look forward to sharing this unique spiritual and sonic journey with the Cincinnati public on March 2.”

The Cincinnati Enquirer published its Winter Arts Guide over the weekend, and the compendium was absolutely filled with upcoming CCM happenings!

Mary Ellyn Hutton provides a comprehensive review of CCM’s Nov. 28 Monteverdi Project concert for Music in Cincinnati, declaring that “early music is thriving at CCM.” You can read her full review here.

As previously reported, the Nov. 28 Monteverdi concert was recorded for future broadcast as part of an exciting new collaboration between CCM and CET, Cincinnati Public Television. Learn more about this collaboration here or read the News Records‘ coverage here.

CCM officially kicked-off its exciting new collaboration with CET Cincinnati Public Television earlier this week with the Nov. 28 Monteverdi Masterworks concert. Today, you can enjoy a behind-the-scenes look at the shoot, courtesy of CET.

Learn more about the collaboration here. 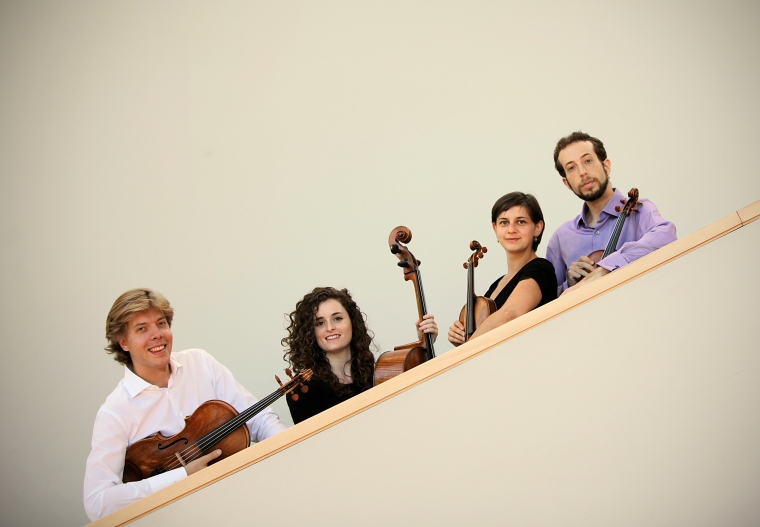 The Ariel String Quartet at CCM. Courtesy of The Enquirer/ Liz Dufour

Last month, the Quartet visited CET, Cincinnati Public Television to record an episode of Showcase with Barbara Kellar. You can view the entire episode here.