Two alumni from CCM’s Electronic Media Division worked behind-the-scenes on films nominated for Oscars in the 2018 Academy Awards! Hosted by Jimmy Kimmel, the 90th Academy Awards ceremony will take place at the Dolby Theatre in Hollywood this Sunday, March 4 and will be broadcast live on ABC at 8 p.m.

Nick Lipari (BFA, 2012) was the first assistant editor on Three Billboards Outside Ebbing, Missouri, which is nominated for best Film Editing. Directed by Martin McDonagh, the film is nominated for three Oscars, including Writing (Original Screenplay) and Music (Original Score). This isn’t Lipari’s first time working on a major film. He previously served as the assistant editor on Rogue One: A Star Wars Story, which was one of the highest-grossing films of 2016.

Dan Schroer (BFA, 1999) worked as the second camera assistant on Christopher Nolan’s Dunkirk, which is nominated for eight Oscars including Best Picture, Cinematography, Directing, Film Editing, Music (Original Score), Production Design, Sound Editing and Sound Mixing. Schroer has worked on multiple blockbuster films directed by Nolan, including Inception, Interstellar and The Dark Knight Rises. You can see his latest work in A Wrinkle in Time, which comes to theaters on March 9, and in Rampage, which comes to theaters on April 20.

E-Media alumni aren’t only being recognized at the Academy Awards. Brian Lazarte (BFA, 2004) was the film editor for Kailash, which won the Grand Jury Prize for Best Documentary at the 2018 Sundance Film Festival. At the 2018 Grammy Awards, David Pescovitz (BFA, 1992) won the Grammy Award for Best Boxed Or Special Limited Edition Package for The Voyager Golden Record: 40th Anniversary Edition. 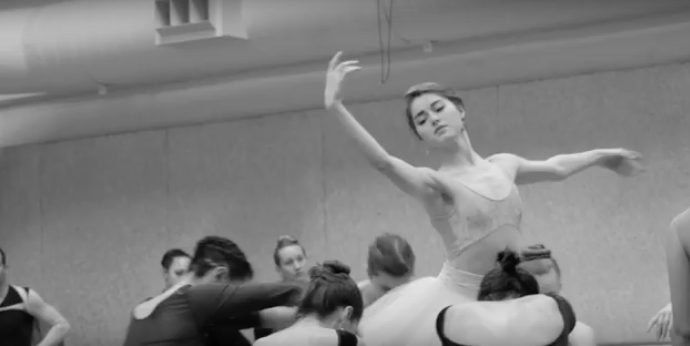 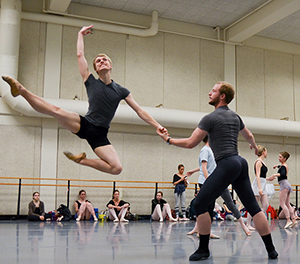 After months of work and hours of filming, University of Cincinnati students produced a video series that recently won an Emmy at the Ohio Chapter of the National Academy of Television Arts and Sciences.

Mark D’Andrea (BFA E-Media, 2016) won the Emmy as director and videographer of Building a Ballet. He worked on the project as a student with classmates enrolled in the Advanced News Writing and Production course, part of UC’s Digital Media Collaborative (DMC) between CCM, the College of Design Architecture, Art and Planning, the McMicken College of Arts & Sciences and UC Libraries.

Taught by Assistant Professor of E-Media Hagit Limor and Journalism Professor Bob Jonason, the class was created under the DMC umbrella in 2015 to build a bridge between colleges, giving students a hands-on learning experience that goes beyond the classroom. It blends technical and production skills  with creative expertise and storytelling.

“They learn to collaborate, they learn from each other, and they learn what it takes to produce professional-quality work,” Jonason said. “We think the class emulates real life. No matter where students land a job, they likely will be working in teams and with colleagues with various skills and from various backgrounds. And they will be held to high standards. This class helps prepare them for that work environment.”

Once completed, student projects are pitched to local media outlets for publication. The “Building a Ballet” videos were featured in Cincinnati Magazine. Previous class projects have been published by WCPO, FOX19 and the Cincinnati Enquirer, according to Limor. Students carry the project from idea to reality setting up interviews, shooting the film and editing it down to the final product. “They are in charge,” she said.

At the beginning of spring semester, students pitched the idea to create a video series focused on CCM’s production of Swan Lake.

How do you build a ballet? What do rehearsals look like?

They answered those questions in four videos composed of cast interviews and raw rehearsal footage.

“Watching the dancers perform was incredibly powerful, and at first, I didn’t feel like I was doing it justice,” D’Andrea said. “So I asked my teachers, and I kept experimenting and trying new things, really watching the dance and seeing where I needed to be to get it right.”

A recent graduate, D’Andrea is currently working as an assignment editor at FOX19 and has applied to several video production jobs. His dream is to one day make music videos or special skits for Saturday Night Live.

The Advanced News Writing and Production class is designed to give students professional work experience so they can build their resumes before they graduate, Limor said. Each project serves to strengthen their skill sets with hands-on experience.

“When you get out of school, potential employers want you to be as well-rounded as possible,” Limor said. “This is an innovative class that is exactly what the future needs to be for this line of work. Experiential learning is everything when training people for a job.”

Described by Backstage magazine as a “first-rate BFA program in acting, ” CCM Drama creates graduates who go on to careers in theatre, film, television and national media. Watch the video above and imagine the possibilities.

With programs like E-Media and Drama living side-by-side, it’s easy to see why CCM is considered a preeminent institution for the performing and media arts!

Learn more about CCM’s Department of Drama by visiting ccm.uc.edu/theatre/drama. 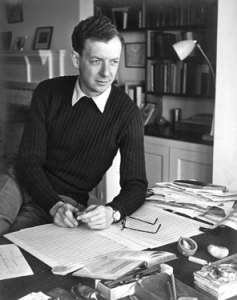 Beginning on Thursday, Oct. 24, and running through what would be Benjamin Britten’s 100th birthday on Friday, Nov. 22, CCM’s Britten Centenary Celebration includes a guest lecture by filmmaker Tony Palmer, free public screenings of the films Nocturne and A Time There Was, plus a Mainstage Series production of Britten’s two-act opera Owen Wingrave.

The celebration culminates with a birthday concert on Nov. 22 by the CCM Philharmonia featuring the orchestral showpiece The Young Person’s Guide to the Orchestra, narrated by special guest Santa J. Ono, PhD, President of the University of Cincinnati.

Please see individual listings below for additional information on the festival’s public events.

CCM’s Division of Electronic Media welcomes guest speaker Nick Belperio to the Cohen Family Studio Theater from 6-7:30 p.m. on Thursday, Oct. 24. The Senior Vice President of Marketing for the FOX Broadcasting Co., Belperio will provide an inside look at the development, promotion and evaluation of the new hit television drama Sleepy Hollow, scheduled to air Monday nights on FOX. This presentation is free and open to the general public.

Belperio was named Senior Vice President of Affiliate Marketing in November 2007. He is responsible for supervision of the network’s Affiliate Marketing team, which oversees marketing and promotion at 209 FOX affiliates across the U.S., as well as its National Radio Promotion department. Belperio also helps guide the general objectives of the network’s marketing team, effectively maximizing affiliate TV stations’ air across all dayparts, producing creative launch kits and promo merchandise, as well as maintaining significant presence on local websites and social media platforms.

All films will be shown at 6 p.m. on Wednesdays in the TUC MainStreet Cinema on the campus of the University of Cincinnati, except for the screening of Eduardo Nunes’ Southwest, which will be held at 6 p.m. on Monday, Dec. 2.

Launched in 2003, the Global Lens film series is designed to support the distribution of unique and critically acclaimed cinematic works from around the world. The 2013 series premiered at the Museum of Modern Art this past January and is now being presented in over 35 cities across the United States and Canada.

Two students from CCM E-Media will be honored by the Ohio Valley Chapter of the National Academy of Television Arts and Sciences (NATAS) at the 49th Annual Ohio Valley Regional Emmy Awards on Saturday, July 20!

A 2012 graduate of CCM E-Media, Nick Lipari will receive a Student Production Award as editor for “Last Night in Town.”

Current student Tim Neumann will receive an Honorable Mention Award in the Commercial category for his work as co-writer/co-director/editor of “The Field of E-Media.”

Students from CCM E-Media have won six Regional EMMY Awards over the past three years, and won multiple national awards annually for the past 18 years.

Professor John Owens has been appointed head of CCM’s Division of Electronic Media.

CCM is pleased to announce that Professor John Owens, PhD, has been appointed head of the Division of Electronic Media (E-Media). Owens’ appointment will take effect this summer, following the retirement of former E-Media division head Marjorie Fox.

Owens joined CCM E-Media’s faculty in 1999 and has taught a variety of courses concentrated in the areas of media sales and programming. He also leads students in the development and management of Bearcast, the University of Cincinnati’s official internet radio station. In 2001, he was recognized with a CCM Ernest N. Glover Outstanding Teaching Award.

All films will be shown at 2 p.m. on Mondays in the TUC MainStreet Cinema on the campus of the University of Cincinnati.

The science fiction film Chronicle topped the box office last weekend and CCM alumnus Elliot Greenberg had a large part in the film’s success. The film was edited by Greenberg, who graduated from CCM E-Media in 2001. You can view the trailer for the film below: