Subscribe to THE VILLAGE NEWS and we will deliver these transformational stories to your inbox throughout the year. If you missed our SUMMER 2014 issue, sign up today and we’ll send you a copy!

Have a story of your own? Share it with us today.

And don’t worry: we will continue to provide you with breaking news through the CCM Blog, too!

Find out more about THE VILLAGE NEWS by visiting ccm.uc.edu/villagenews.

You can listen to audio of the full interview here.

The latest installment of WVXU’s Around Cincinnati features a number of upcoming CCM performances! First up, guest artist D. Lynn Meyers gives Jim Stump a preview of this week’s Mainstage Production of Metamorphoses (Feb. 5 – 9). You can listen to their full conversation here.

Later on in the program, Brian O’Donnell speaks with CCM faculty members Awadagin Pratt and Michael Chertock about the Bearcat Piano Festival and Pianopalooza (Feb. 6 – 16). You can listen to the interview here.

Even Gramophone Magazine’s latest podcast features an upcoming CCM performance, as James Jolly speaks with guest artist Gerald Finley about his current tour with pianist Julius Drake, which comes to CCM’s Corbett Auditorium on Feb. 5! You can download the podcast here.

Kanniks with the choir at St. Johns Unitarian Church in Cincinnati in 2004.

You can listen to the entire Morning Edition segment here.

Kanniks Kannikeswaran is a pioneer of the Indian American choral movement. His far reaching work in this area has led to the founding of Indian community choirs in not only Cincinnati, but also Washington, D.C.; Houston; Tampa and Fort Lauderdale, Fla.; Minneapolis-St. Paul; Allentown, Pa.; Toronto; and, most recently, The Hague.

He has collaborated with artists such as Lakshmi Shankar, Mallika Sarabhai, with the Cincinnati Chamber Orchestra and with institutions such as the National University of Singapore in producing crisp innovative works that convey the message of universal connectedness.

His magnum opus Shanti – A Journey of Peace has personally touched the lives of over 900 performers and has been seen by over 9000 even as many more communities are gearing towards performing this work.

You can listen to audio of the entire interview here.

The world’s finest jazz trumpet players will compete for $15,000 in total prizes during this prestigious competition, which is sponsored by the Herb Alpert Foundation. This year’s proceedings will culminate with a free gala concert on Sept. 14, featuring performances by the finalists and the acclaimed judges, with accompaniment by the Cincinnati Contemporary Jazz Orchestra. Learn more about the Competition and related events here. 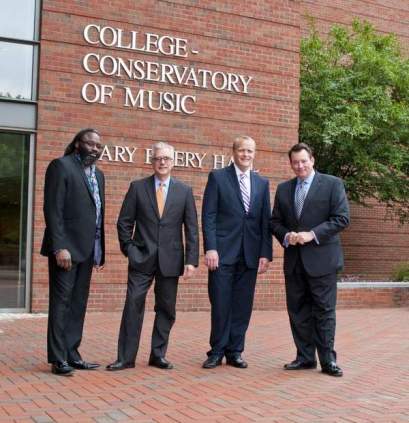 Excitement continues to build for the debut of Cincinnati’s re-energized World Piano Competition, which kicks off next Monday, July 8!

If you want to learn more about this unique collaboration between CCM and the Cincinnati Symphony Orchestra, be sure to check out the Cincinnati Enquirer‘s in-depth preview.

If you missed the broadcast, you can listen to audio of the entire interview here.

CCM’s Kurt Weill Festival resumes this month with the Mainstage Series production of Weill and Bertolt Brecht’s The Threepenny Opera (running Feb. 28 – March 10). This spring’s festival events will also include concert performances of Weill’s Kiddush (Prayer of Sanctification) and the a capella madrigal “Ho, Billy, O!” from the Weill musical Love Life. View a full schedule of festival events here. Learn more about The Threepenny Opera after the jump.

Tomorrow evening, the Ariel Quartet opens our 2012-13 series of major events with its CCM debut.

In the latest installment of WVXU’s “Around Cincinnati,” Anne Arenstein speaks with Quartet members Amit Even-Tov and Jan Grüning about the concert, the Quartet’s 10th anniversary together and their new quartet-in-residence status at CCM.

You can listen to the entire interview here.