Warm up for the start of the Major League Baseball season with a special virtual performance of “Take Me Out to the Ballgame” that showcases UC College-Conservatory of Music students and alumni with MLB players. The performance is available to watch online.

The video features 22 CCM students and alumni representing multiple areas of the college including violin, cello, clarinet, double bass, oboe, flute, piano, harp, horn and more. It also includes CCM Professor of Music (Tuba and Euphonium) Tim Northcut. It was produced by CCM Commercial Music Production alumni Armin Meyer and Grant Bayer, who are audio engineers at Cincinnati’s Zated Records. Many of these students and alumni also participated in Sheckler’s virtual performance of “You’ll Never Walk Alone.” CCM students and alumni involved in the “Take Me Out to the Ballgame” performance include:

The performance has earned media attention from the Cincinnati Enquirer, WGN-TV, Backstage and Spectrum News.

Rod Serling’s comedy about confusion between Russians and the Cincinnati Reds airs at 8 p.m. on March 25 on WVXU 91.7.

The New York Times describes the comedy as “a screwball romp, with a side of whimsy.” Read the full article. 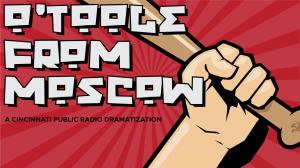 O’Toole From Moscow is about confusion between Russians and the Cincinnati Reds at the height of the “Red Scare” over possible Communist infiltration of American institutions during the Cold War. Serling originally wrote the one-hour television play for NBC Matinee Theatre and it was only broadcast once on Dec. 12, 1955. The performance was not filmed or recorded.

O’Toole From Moscow was adapted for radio and produced by WVXU’s John Kiesewetter, who tracked down the original script with the help of Serling historians. He also met with Serling’s daughter, Anne, who is the program host and narrator on the radio play. CCM Acting students recorded the comedy, which was directed by CCM Professor Richard Hess, at Cincinnati Public Radio’s studio. Sammi Grant, a visiting master’s student from London’s Central School of Speech and Drama, tutored the cast so they would sound authentically Russian. 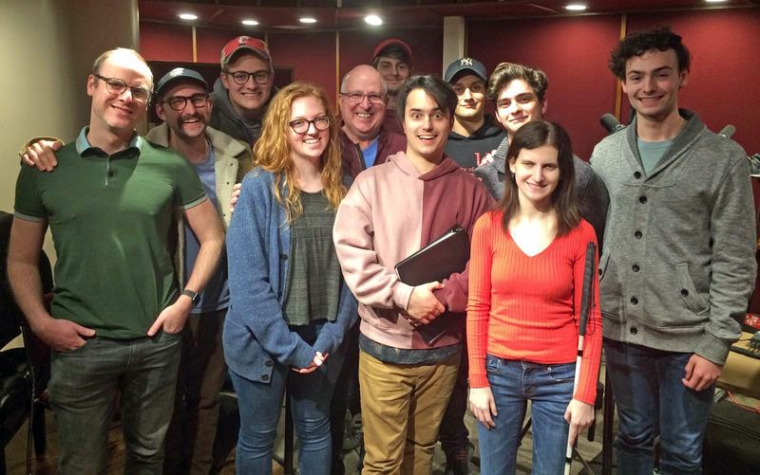 In O’Toole From Moscow a Russian consulate staffer named Mushnick is being sent back from New York to Moscow for re-education because of his high absences due to attending Brooklyn Dodgers games at Ebbets Field. So Mushnick and a muscular Russian security officer named Joseph Bishofsky hop a train and go as far west as their money will take them — to Cincinnati. Bishofsky panics in Cincinnati and goes to the Reds office to turn himself in, mistaking the baseball team for his Russian comrades. Mushnick bursts in to explain that Joseph – whom he calls “Joseph O’Toole” – is an outfielder wanting a tryout. The Reds give O’Toole a shot, and he ends up being a better slugger than Kluszewski – until the Russians find him.

Tune in to hear the O’Toole From Moscow broadcast on 91.7 WVXU at 8 p.m. this Wednesday, March 25. A live stream of the broadcast will also be available on the WVXU website.

CCM students and alumni will sing The Star-Spangled Banner at the Great American Ball Park Friday night before the Cincinnati Reds play against the Seattle Mariners. The baseball diamond will serve as the singers’ stage as they perform during UC’s annual Bearcats at the Ballpark outing. 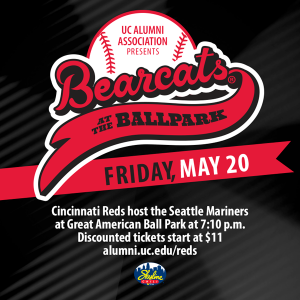 The event features a pre-game celebration at 5:45 p.m. with free giveaways at the Kroger Fan Zone, where UC President Santa Ono will perform the cello before the game. President Ono will also throw the first pitch at 7:10 p.m. Each year, discounted game tickets are offered to UC students, alumni, faculty and staff for Bearcats at the Ballpark:

To purchase tickets, visit reds.com/bearcats or call (513) 765-7055. Make sure to select CCM as your college in the drop-down menu!

Are you ready to apply to UC? In celebration of applications opening for fall 2022, UC is waiving the application fee for all undergraduate students that submit their application on Sunday, Aug. 1. To get started, visit uc.edu/apply #bearcatsbound
Let’s welcome Matt JC Welsh, an incoming orchestral conducting student from Atlanta, GA! #CCMwelcome21
Cincinnati has many amazing murals, but one of our favorites is right here in CCM. Located in the main stairway in CCM’s Mary Emery Hall is a mural originally designed by DAAP alum Lori Seibert. It was originally on display in the CCM Café (which is now Starbucks). The mural was reinstalled to help celebrate CCM’s 150th anniversary in 2017-18.
Give a warm welcome to Emily Grace Jordan, an incoming Jazz Studies student! #CCMwelcome21
ICYMI CCM and Cincinnati Playhouse in the Park partnered to share new audio plays for theatre lovers everywhere! Listen on the CCM website or Playhouse’s website (cincyplay.com)
Let’s welcome incoming Music Education student Mason Deitsch! #CCMwelcome21
#CCMstars Victoria Okafor (MM Voice, ‘21) and Max Chernin (BFA Musical Theatre, ‘12) compete in the final round of the Lotte Lenya Competition on August 28!! They were chosen to advance to the final round of 15 vocalists out of a record applicant pool of more than 500 singers!
Welcome incoming Musicology student Jerika O’Connor Hayes! #CCMwelcome21
“Hope After Hate” shares a story of struggle and survival during the Holocaust with lessons to inspire action against acts of hatred and bigotry today. Watch the play on CCM’s website and YouTube channel (link in bio).
Let’s welcome incoming Double Bass student Brooks Taylor! #CCMwelcome21
Welcome incoming Lighting Design and Technology student, Baron Leon!!
CCM Commercial Music Production alum Bryard Huggins recently released a new album to celebrate the 10th anniversary of his debut record. Featuring contemporary jazz, smooth jazz and jazz fusion, the new album shares 9 new songs — and a cover of Selena’s hit “I Could Fall In Love!”
Let’s welcome Julia Kay Bobell, an incoming Master of Music student in Oboe. #CCMwelcome21
Meet the next class of @cincysymphony + CCM Diversity Fellows! The program’s tagline — Bravos Without Barriers — gets to the heart of its mission: eliminating obstacles that can prevent extraordinary musicians from achieving their full potential.
Everyone give a warm welcome to DiDi Elisabeth Turley, an incoming MA/MBA Arts Admin student!! Follow along this summer as we introduce you to students who will be joining us this fall. #CCMwelcome21
Loading Comments...
%d bloggers like this: