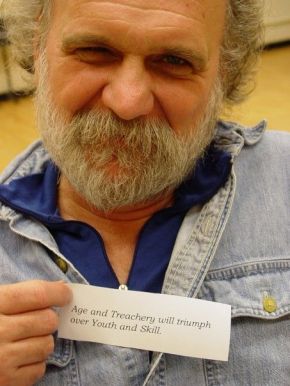 CCM Professor of Drama Michael Burnham joined the faculty in 1984. He retires later this month.

CCM Professor Michael Burnham has been a faculty member since 1984 and when asked about his many years of work for CCM, he muses, simply, “I liked all of them.” He will retire this month, following the conclusion of the school year and his work as director for CCM’s upcoming production of Execution of Justice, which runs April 18-20 as part of this year’s Studio Series.

“Professor Michael Burnham has been the artistic thorn in the side of every student who has entered CCM Drama for the past 29 years,” says Richard E. Hess, CCM’s A.B., Dolly, Ralph and Julia Cohen Drama Department Chair. “He digs into the mind of each and every new student, causing disruption, chaos and sometimes a little irritation, all in service of deeper thinking, harder questioning, more creativity and expansion of possibilities. Michael’s wonderful mind has touched the hearts of every student lucky enough to work with him.” 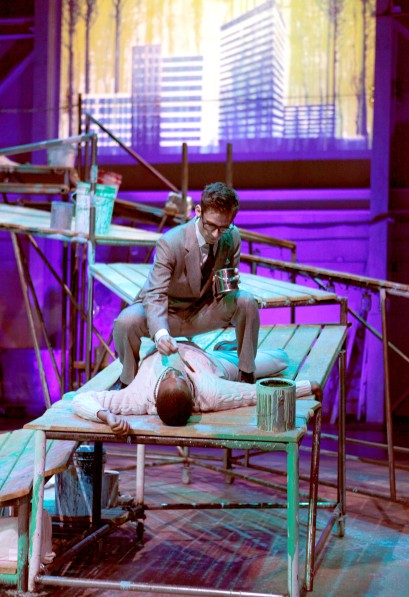 Are you coming to campus for UC Homecoming this weekend? Come to CCM Village after the Homecoming Kickoff Party at the Myers Alumni Center on Friday for an 8 p.m. performance or come early on Saturday and catch a matinee of A Midsummer Night’s Dream at 2 p.m. (kick-off is scheduled for 7 p.m.).

This is a perfect weekend to experience EVERYTHING going on at the University of Cincinnati! Don’t miss the opening of CCM’s must-see 2012-13 Mainstage Series. 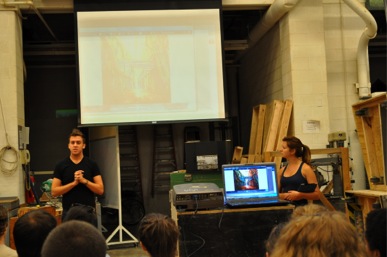 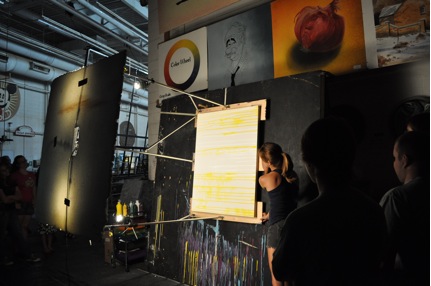 To ignite its 2012-13 Mainstage Season, CCM will be presenting one of Shakespeare’s best-loved plays, A Midsummer Night’s Dream, from Oct. 3 (preview) – 7 in UC’s Patricia Corbett Theater.

The play takes us on a wistful journey with four lovers and a weaver as they interact with some Puck-ish pranks in the wood. Director Michael Burnham and fellow designers add a spin to this version of the show as we find ourselves in the summer of 1963, right before the assassination of John F. Kennedy. Learn more about how this spin influenced the show’s costume design here.

As previously reported, international artist Amy Shackleton joins the design team of CCM’s  A Midsummer Night’s Dream to engage in a unique collaboration, creating an original piece of art. Amy’s process was documented and will set the backdrop for this production.

Brittany McManus is a third-year master’s degree student in costume design. Along with the production’s scenic designer, lighting designer, sound designer and wig & make-up designer (all of whom are third-year graduate students at CCM), McManus’ work on A Midsummer Night’s Dream is serving as her thesis project.

McManus’ unique costume design concepts for this production draw inspiration from the 1960s. “We are doing three different groups of people,” she explains. “The 60s are when the countercultures really emerge, so you start to see these different facets of society in a way that you may have seen before… but not to this extent.” 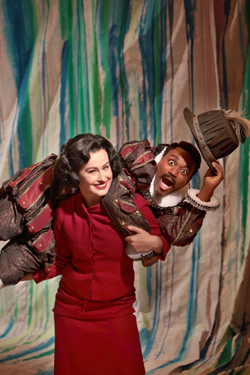 Megan Marshall as Hippolyta and Trey Wright as Nick Bottom in CCM’s Mainstage Production of Shakespeare’s ‘A Midsummer Night’s Dream.’

The University of Cincinnati College-Conservatory of Music (CCM) will present a nostalgic new take on the Bard of Avon’s adored and enduring A Midsummer Night’s Dream from Oct. 3 (preview) through 7 in Patricia Corbett Theater. This comedic dalliance of magic and young love will be presented with a wistful and unprecedented 1960s concept, and will also feature an original work of art by renowned Canadian visual artist Amy Shackleton.

A Midsummer Night’s Dream explores the adventures of a quartet of Athenian lovers, a group of six amateur actors (the mechanicals) and their encounters with the fairies who control and manipulate them, including Puck, one of Shakespeare’s most celebrated characters. The setting of 1963 presents a new concept organically and creatively orchestrated by director Michael Burnham and costume designer Brittany McManus. 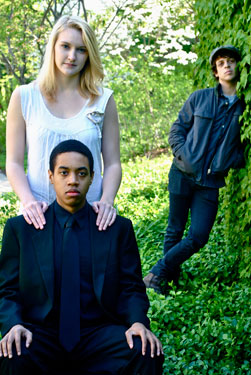 CCM will present the world premiere of CCM alumna Alison Vodnoy Wolf’s (BFA ’09) adaptation of James Joyce’s Ulysses as the next installment of its 2011-12 Studio Series. The drama runs April 26-28 in the Cohen Family Studio Theater on the University of Cincinnati campus. Tickets to Ulysses are free, but reservations are required.

Note: This production features adult themes and situations and is intended for mature audiences.