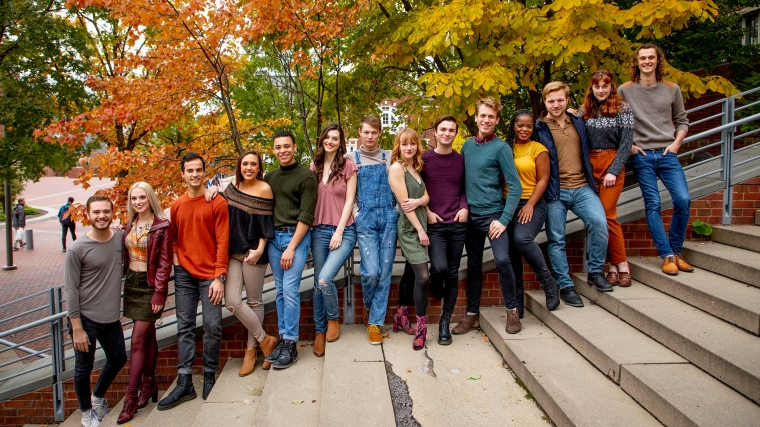 Get a sneak peek at CCM Musical Theatre’s “Not Famous Yet” Showcase on March 15 and 16 before our stars of tomorrow take the show to New York.

Cincinnati audiences can see the first performances of an original showcase created by CCM’s Musical Theatre Class of 2019 on March 15 (CCMpower benefit performance) and 16, 2019, at Patricia Corbett Theater.

Featuring hit songs from Broadway, Off-Broadway and pop music, the Senior Showcase is created by the students themselves under the supervision of Musical Theatre Chair Aubrey Berg and with the assistance of musical director Julie Spangler. Cincinnati performances include the CCMpower benefit event at 7 p.m. on March 15 and the free performances at 2 and 5 p.m. on March 16.

Admission to the performances on March 16 is free and reservations are required; tickets become available at 12:30 p.m. on Monday, March 11 through the CCM Box Office. Event details are below.

CCM’s stars of tomorrow share the musical revue with Cincinnati audiences before they take it to New York, where they present it for leading agents, casting directors and managers in the business. The showcase takes the format of a Broadway audition, with the actors showing off their solo and ensemble skills through song and dance numbers. The Class of 2019 will present their showcase at 3 p.m. and 6 p.m. on Wednesday, April 17, 2019, at New World Stages in New York. For more information and reservations for the showcase in New York, call Patti Hall at 513-556-5803 or email hallpt@ucmail.uc.edu.

Many students are connected with professional performance opportunities shortly after they present the showcase in New York. Such was the case with Paul Schwensen (BFA Musical Theatre, 2017), who auditioned for Miss Saigon after his showcase and is now in the national tour of the musical.

The annual showcase began with the establishment of the Patricia A. Corbett Distinguished Chair of Musical Theatre in 1991. At the time of its inception, it was the only academic chair of its kind in the United States.

Jordan Alexander is from Sidney, Ohio. He has been seen in The Drowsy Chaperone (Aldolpho), A Raisin in the Sun (Bobo) and West Side Story at Santa Rosa Summer Repertory Theatre. He performed in Gypsy (Tulsa) at Weathervane Playhouse and Runaways (Mex Mongo) at Know Theatre of Cincinnati. At CCM, he appeared in Jesus Christ Superstar (Judas), Lysistrata Jones (Uardo), The Hunchback of Notre Dame, Guys and Dolls, Children of Eden and Big River.

Anya Axel is from Needham, Massachusetts. She has been seen at Kincaid Regional Theatre as Laurey in Oklahoma! and at Reagle Music Theatre in 42nd Street. At CCM, she has appeared in Guys and Dolls (Miss Adelaide), Mack and Mabel (Phyllis Foster), Yeast Nation (Yan the Un-named), A Chorus Line (Tricia, understudy Cassie, Sheila, Maggie), The Merry Widow (Froufrou), American Idiot, Jesus Christ Superstar and Seussical. She originated the role of Ariel in the developmental workshop of Matryoshka at CCM and in New York for Alchemation. Anya is an Equity Membership Candidate.

Bryce Baxter is a native of Fredericksburg, Virginia. He has been seen as Davey in Newsies and Josh in 9 to 5 at Porthouse Theatre in Akron, and as Franz in Rock of Ages and Ru in Merrily We Roll Along at Santa Rosa Summer Repertory Theatre. At CCM, Bryce has performed in The Hunchback of Notre Dame (Frollo), Godspell (Sonia), Jesus Christ Superstar (Jesus), Sondheim on Sondheim (Matthew Scott), Children of Eden (Adam) and Runaways (Iggy). Bryce is a proud member of AEA.

Aria Braswell is from San Antonio, Texas. Her credits include The Little Mermaid (Ariel), Cabaret and Oliver at Clinton Area Showboat, and Grease and The Man Who Came to Dinner at Wagon Wheel. At CCM, she has performed in Guys and Dolls (Sarah Brown), Sondheim on Sondheim (Erin Mackey), The Merry Widow, Jesus Christ Superstar, Mack and Mabel and the premiere of They Were You: The Songs of Tom Jones and Harvey Schmidt. Her film credits include Mystery Diagnosis for the Discovery Health Channel. Aria released her debut album, Lady Nobody, in May 2018.

Kevin Chlapecka is from Chicago, Illinois. He has been seen in Sister Act and Ghost, the Musical at Lake Dillon Theatre Company, Footloose (Ren) at Kincaid Regional Theatre and Ordinary Days (Warren) at Steel Beam Theatre. At CCM, he appeared in Seussical (Cat in the Hat), Guys and Dolls (Nathan Detroit), The Hunchback of Notre Dame (Clopin), Big River (The King), Mack and Mabel (Kessel) and A Chorus Line. Kevin is an Equity Membership Candidate.

Dylan Dougal is from Rochester, New York. He has performed in Oklahoma! (Curly) at Kincaid Regional Theatre and Runaways (AJ) at the Know Theatre of Cincinnati. At CCM, he has been seen in The Hunchback of Notre Dame (Saint Aphrodisius), The Theory of Relativity (Oliver), Children of Eden (Ham) and Guys and Dolls.

Kendall McCarthy is from Raleigh, North Carolina. She played Ariel in Footloose at Kincaid Regional Theater, Pilar in Legally Blonde and Mary Magdalene in Jesus Christ Superstar at North Carolina Theater and Young Groupie in Rock of Ages at Lake Dillon Theater Company. At CCM, she performed as Adelaide in Guys and Dolls, Julie in The Theory of Relativity, Aphra/Eve understudy in Children of Eden, Florika in The Hunchback of Notre Dame, Deidre in Runaways and Gertrude understudy in Seussical. She appears in the films Changeover, Pills, Grace Running and A View from the Bay. Kendall is an Equity Membership Candidate.

Jenny Mollet is from the Bronx, New York. She appeared in Oprah Winfrey’s Broadway production of The Color Purple (Young Celie/Henrietta) and H2O: A Play About Water at the Edinburgh Fringe Festival. She can be seen in the music video of Eve Ensler’s “One Billion Rising.” At CCM, she appeared in Lysistrata Jones (Myrhrinne), Big River (Alice), Seussical (Sour Kangaroo), Godspell (Joanne) and The Hunchback of Notre Dame (Esmeralda). She performed with the University of Cincinnati Marching Band at home games during football season. She has appeared in workshops of new works including Nasha America for Alchemation and is featured on Juel Anthony’s EP available on iTunes. Jenny is a proud member of AEA.

Dylan James Mulvaney is from San Diego, California. He has performed in How the Grinch Stole Christmas at the Old Globe, Sons of the Prophet and Spring Awakening at Cygnet Theatre Company, Peter Pan and All Shook Up at Moonlight Stage and Oklahoma! at the Welk Resort. He received a Stage Scene LA award for his work as Peter in Bare: A Pop Opera at Diversionary Theatre. At CCM, he has been seen in Godspell, The Theory of Relativity, Seussical, Mack and Mabel and Runaways. He performed at Joe’s Pub with The Skivvies and in the LA/NYC reading of Living Over the Rainbow. His film and television experience include the current pilot of Love Not Likes, 7th Heaven and Awkwardness. Dylan is an EMC.

Bryn Purvis is from Baton Rouge, Louisiana. She has performed in Legally Blonde (understudy Pilar, Brooke) at the Lexington Theatre Company, and in Cabaret and A Chorus Line (Bebe) at Summer Lyric Theatre. At CCM, she was seen in Seussical (Mayzie LaBird), A Chorus Line (Kristine), Guys and Dolls (Mimi/Dance Captain), Mack and Mabel, Jesus Christ Superstar, The Hunchback of Notre Dame and Duke Ellington’s The Nutcracker Suite. Bryn is an Equity Membership Candidate.

Alex Stone is from McLean, Virginia. He has been seen in Newsies (Jack Kelly) at Tulane Summer Lyric Theatre, Dial M for Murder, The 39 Steps, The Bridges of Madison County and Footloose at the Clinton Area Showboat, and in Aftershocks at Signature Theatre. At CCM, he performed in Mack and Mabel (Mack Sennett), Jesus Christ Superstar (Judas), Sondheim on Sondheim (Tom Wopat), Runaways (Eddie), American Idiot and The Hunchback of Notre Dame (Quasimodo). Other credits include the developmental workshops of Home Street Home and Nasha America (Yasha) for Alchemation. Alex is an Equity Membership Candidate.

Frankie Thams is from Detroit, Michigan. He has performed in Mamma Mia (Eddie) at Stages St. Louis and in Joseph and the Amazing Technicolor Dreamcoat (Joseph), Hairspray (Link Larkin) and Annie Get Your Gun at Tulane Summer Lyric Theater. He was also in The Pirates of Penzance (Frederic) at Shenandoah Summer Music Theatre. At CCM, he performed The Hunchback of Notre Dame (Phoebus), Guys and Dolls (Sky Masterson), The Theory of Relativity (Ryan), Seussical (Horton), Mack and Mabel, A Chorus Line, American Idiot and Carousel. He appeared in the developmental workshop of Nasha America for Alchemation. Frankie is an Equity Membership Candidate.

Zach Triska is from Chicago, Illinois. He has performed in Joseph and the Amazing Technicolor Dreamcoat (Zebulun) at Totem Pole Playhouse, Footloose (Willard) at Kincaid Regional Theatre and Iggy in Runaways at the Know Theatre of Cincinnati. At CCM, his credits include Children of Eden (Cain), in The Theory of Relativity (Adam) and Seussical. He appeared in the developmental workshop of Home Street Home for Alchemation. He served as Assistant Director for the CCM production of Godspell. Zach is an Equity Membership Candidate.

Madelaine Vandenberg is from Ithaca, New York. She has appeared as Natalie in Next to Normal at Porthouse Theatre and Urinetown at Cider Mill Playhouse. At CCM, she has been seen in A Chorus Line (Bebe), American Idiot (Libby), Children of Eden (Aysha understudy Mama Noah), Seussical, Jesus Christ Superstar and The Hunchback of Notre Dame. She was seen in the developmental workshops of Home Street Home (Trashley) and Nasha America (Loretta) for Alchemation. Madelaine is an Equity Membership Candidate.

Additionally, the Class of 2019 will join Musical Theatre graduates from the last five decades at two gala cabaret performances at 7 p.m. and 9:30 p.m. on Tuesday, April 16 Feinstein’s/54 Below in New York. For reservations, visit 54below.com/events/ccm-golden-anniversary-celebration.

*The CCMpower Benefit performance is followed with wine and dinner-by-the-bite in CCM’s Atrium. The event also includes the presentation of the Musical Theatre Young Alumni Award to Kristy Cates (BFA Musical Theatre, 1999). Cates was a member of the original Broadway cast of Wicked and went on to play Elphaba in the acclaimed production of the musical in Chicago. CCMpower Benefit performance details and ticketing information is available online at ccm.weshareonline.org/NotFamousYetShowcase2019

Admission
Admission to the performances on March 16 is FREE. Seating is limited and reservations are required. Tickets become available at 12:30 p.m. on Monday, March 11. Visit the CCM Box Office or call 513-556-4183 to reserve. Limit two tickets per order.

To reserve a ticket to the CCMpower Benefit performance on March 15, call CCM External Relations at 513-556-2100 or visit ccm.weshareonline.org/NotFamousYetShowcase2019.