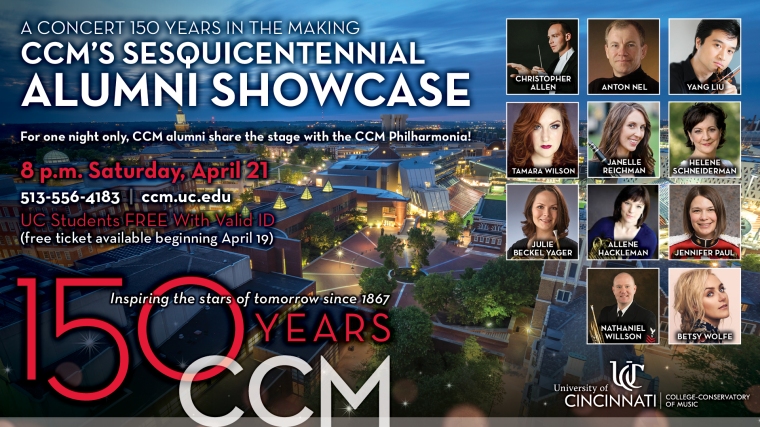 Learn more about these four CCM alums in their bios below:

Allene Hackleman has been principal horn of the Edmonton Symphony Orchestra since 2004. A native of Vancouver, Hackleman began studying the horn under the tutelage of her father, Martin Hackleman. She later attended the Interlochen Arts Academy in Michigan, from which she graduated with honors. Hackleman earned her bachelor of music degree summa cum laude from CCM, as a student of Randy Gardner. Hackleman has performed with the National Symphony Orchestra (Washington, D.C.), the Montréal Symphony, the Winnipeg Symphony Orchestra and the Evansville Philharmonic. She has also performed concerti with the Edmonton Symphony and the Alberta Baroque Ensemble, as well as the Red Deer Symphony and the Victoria Symphony.

In 2004, she completed a long-term career development residency at the Banff Centre for the Arts. Since 2007, Hackleman has been a member of the prestigious Summit Brass ensemble, and as such has recorded, taught and performed as a faculty member at the Rafael Mendez Brass Institute in Denver. She has performed at the Festival of the Sound in Parry Sound, Ontario and at the Ottawa Chamber Music Festival. She was also a featured guest artist at the International Women’s Brass Conference in Toronto in 2010. Hackleman is privileged to be a member of the Canadian National Brass Project, a large brass ensemble made up of some of the finest brass players from across Canada. She pursues an avid interest in chamber music and has performed for the Edmonton Recital Society and the University of Alberta’s Music at Convocation Hall series, as well as in British Columbia for the Pender Harbour Music Festival. Hackleman is instructor of horn at the University of Alberta

She was a member of the Honolulu Symphony prior to returning to Indianapolis in 2006. She also performed for three summers with the Verbier Festival Orchestra, touring throughout Europe, Asia and South America. At the festival, Beckel Yager performed in a piano quintet with conductor and pianist James Levine. Her horn was made locally by Darin Sorley.

Musician 1st Class Nathaniel Willson joined the Navy Band as a French hornist in 2014, after serving more than four years with the U.S. Naval Academy Band in Annapolis, Maryland. Willson was born in Bowling Green, Ohio, but was raised overseas in Japan and India, graduating high school in 1998 from the American Embassy School in New Delhi, India. He holds a bachelor of music from the Juilliard School and a master of music from CCM. His primary teachers include Randy Gardner, Duane Dugger, Jerome Ashby, Julie Landsman and Bryan Kennedy. 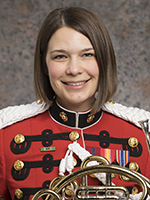 French horn player Gunnery Sergeant Jennifer Paul joined “The President’s Own” U.S. Marine Band in August 2004. She was appointed assistant section leader in January 2016. Paul began her musical training at age 10. Upon graduating in 1996 from Jacobs High School in Algonquin, Illinois, she attended the University of Illinois at Urbana-Champaign, where in 2000 she earned a bachelor’s degree in music education. In 2003, she earned a master’s degree in music from CCM. Paul also received a professional study certificate in 2004 from Temple University in Philadelphia. Her notable horn instructors include Kazimierz Machala of the University of Illinois, Randy Gardner of CCM and Adam Unsworth of Temple University.

Prior to joining “The President’s Own,” Paul was the CCM graduate teaching assistant for the horn studio from 2001-03 and a freelance musician in Philadelphia.