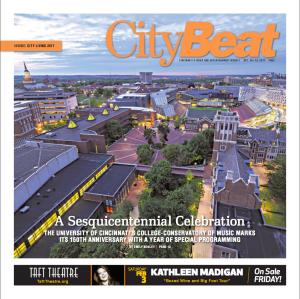 You can read all about CCM’s Sesquicentennial in the latest issue of Cincinnati’s CityBeat, which was published on Wednesday, Oct. 4.

Writer Emily Begley features CCM’s illustrious history, which dates back to when Clara Baur founded the Cincinnati Conservatory of Music in 1867. The article explores CCM’s 150-year timeline, touching on the competition between Baur’s Conservatory and the College of Music of Cincinnati. The two schools eventually merged and later joined the University of Cincinnati to become the CCM of today.

The story also previews some of CCM’s upcoming performances, including the Mainstage Series production of Seussical, which runs Oct. 19-29 in Patricia Corbett Theater.

Read the full story at citybeat.com/arts-culture/culture/media-gallery/20978011/a-sesquicentennial-celebration or view the electronic version online.

You can read more about CCM’s 150th Anniversary in a feature by Jac Kern of UC Magazine, available online at magazine.uc.edu/issues/0917/ccm-150.