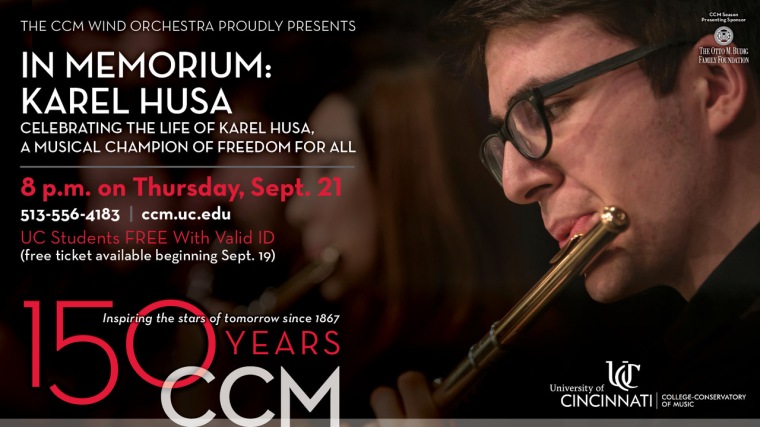 CCM’s Wind Orchestra performs in honor of the memory of composer Karel Husa at 8 p.m. on Thursday, Sept. 21, in CCM’s Dieterle Vocal Arts Center. A musical champion of freedom for all, Husa received the Pulitzer Prize for Music in 1969 and the Grawemeyer Award for Music Composition in 1993.

The program features Husa’s Concerto for Wind Ensemble and Music for Prague 1968, along with works by Czech composers Julius Fučík and Zdeněk Lukáš.

All UC students can receive one free ticket to the Sept. 21 Winds concert with a valid ID beginning Tuesday, Sept. 19. Single tickets for all 2017-18 Concert Series performances are on sale now.

CCM’s Department of Winds Studies will give seven concerts in fall 2017, including free and ticketed performances. Programing information for CCM’s Fall 2017 Winds Series is below.
____________________

Event Information
All events listed here take place in CCM Village on the campus of the University of Cincinnati unless otherwise indicated. Admission is free to many CCM performances, although some events do require purchased tickets or reservations. Please see individual event information for details and ordering information.

Purchasing Tickets
Unless indicated otherwise in the event listings below, tickets can be purchased in person at the CCM Box Office, over the telephone at 513-556-4183 or online at ccm.uc.edu/boxoffice.

8 p.m. Thursday, Sept. 21
• Winds Series •
IN MEMORIUM: KAREL HUSA
CCM Wind Orchestra
Terence Milligan, music director and conductor
The CCM Wind Orchestra opens its new season with a concert in memory of Karel Husa, who died on December 14, 2016, at the age of 95. Born in Prague, he was a recipient of the Pulitzer Prize for Music (1969), the Grawemeyer Award for Music Composition (1993) and a musical champion of freedom for all.
LUKÁS: Musica Boema
HUSA: Concerto for Wind Ensemble
FUČÍK: Entry of the Gladiators March
HUSA: Music for Prague 1968
Location: Dieterle Vocal Arts Center, Room 300
Tickets: $15 general, $10 non-UC students, UC students FREE
____

8 p.m. Thursday, Nov. 2
• Winds Series •
THE NEW COLOSSUS: MUSIC OF AMERICAN IMMIGRANTS
CCM Wind Ensemble
Kevin Holzman, music director and conductor
The New Colossus (1883) by American poet Emma Lazarus has been inscribed on a plaque at the base of the Statue of Liberty since 1903. It was often the first sight seen by the millions of people who immigrated to the United States from war-torn Europe in the 20th century. CCM’s Wind Ensemble celebrates some of the great composers amongst those American immigrants, who have contributed what are now cornerstones of the wind repertoire. This performance is dedicated to the remarkable legacy of Karel Husa.
HUSA: Smetana Fanfare
HUSA: Al Fresco
SKROWACZEWSKI: Music for Winds
NELHYBEL: Symphonic Movement
HINDEMITH/WILSON: Symphonic Metamorphosis on Themes of Weber
Location: Patricia Corbett Theater
Admission: FREE

My Tweets
Join 46,797 other followers