We are saddened to share news of the passing of CCM Professor Emeritus Richard Morris, a piano faculty member from 1976 to 2004 and former chair of the Piano Department. He is survived by his wife, Joyce, and two adult children Kevin and Kerry. 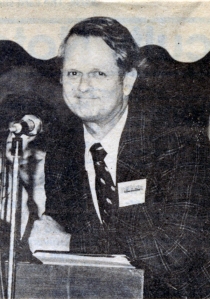 Professor Morris accepts a plaque signifying him as an “honorary alumnus of CCM” thanks to his work as faculty coordinator of the CCM Alumni Association.

Morris earned his BM and MM from Indiana University and was a soloist with the university’s Philharmonic for three consecutive years. He studied with Walter Robert, Bruno Eisner and Sidney Foster.

Before coming to CCM in 1976, Morris taught at the University of Missouri-Columbia for 16 years, where he also served as head of the piano faculty. He was also a past president of the Music Teachers National Association. His former students hold faculty positions throughout the United States and Europe.

A featured clinician, adjudicator and master teacher, Morris performed extensively both as a chamber musician and with orchestras, acquiring a repertoire of 30 different concerti spanning from Bach to Norman Dello Joio.  As a genre recitalist, he performed the 24 Chopin Études and the 24 Debussy Préludes numerous times and was often asked to give workshops on either set.

Professor Morris was a beloved member of the CCM family for nearly three decades. In 1979, he was honored by the CCM Alumni Association for his instrumental work in regrouping that organization. To celebrate his life and legacy, the CCM Piano Department has planned a memorial concert and reception on Saturday, Sept. 10 at 4 p.m. in the Robert J. Werner Recital Hall.

Our thoughts and prayers are with Professor Morris’ family and friends during this time.