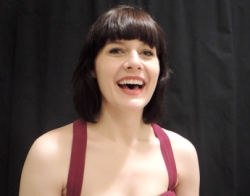 “In ‘Matilda,’ Bowles catches your eye dancing up a storm in the ensemble and breaking your heart as The Acrobat; she also understudies Mrs. Phelps and Miss Honey.”

You can read the full Singular Sensation interview with Bowles here.

Bowles was also recently seen as Irma in Irma La Douce at City Center Encores. She appeared in the original Broadway production of American Idiot in 2010 and was in the ensemble for the rock opera’s national tour in 2011.

She also had a recurring role on HBO’s Boardwalk Empire and appeared as a backup dancer during Kanye West’s Saturday Night Live appearance.

Learn more about the achievements of CCM’s students and alumni by subscribing to The Village News!