It is with great sadness that we share news of the passing of emeritus faculty member Peter Kamnitzer, who served as violist for the legendary LaSalle Quartet from 1949 until the ensemble’s retirement in 1988. Kamnitzer passed away in Israel on Feb. 23, 2016, at the age of 93. He is survived by his wife, Dr. Neora “Sophy” Kamnitzer. 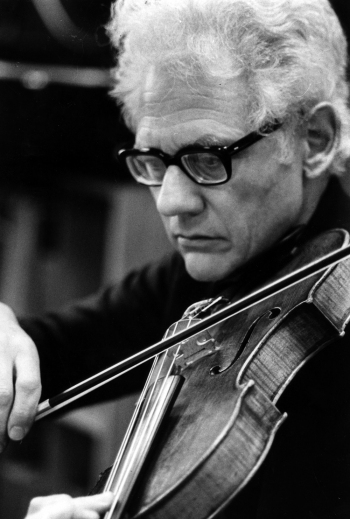 Born in Berlin on November 27, 1922, Kamnitzer began studying the violin at the age of six. As a teenager, he performed in the orchestra of the Jewish Cultural Society in the Free City of Danzig.

Kamnitzer moved to the US in 1941 and began studying the viola at the Manhattan School of Music. He joined the San Antonio Symphony Orchestra in 1944 and became principal viola and a member of the Symphony String Quartet in 1945.

In 1947, Kamnitzer entered the Juilliard School to study the viola with Milton Katims. It was here that he joined the newly formed LaSalle String Quartet.

The LaSalle Quartet held a residency at Colorado College in Colorado Springs from 1949-53, making the ensemble one of the first quartets-in-residence in the United States.

After making its European debut in 1954, the LaSalle Quartet won international recognition for its masterful interpretations of the major works in the chamber music repertory. The Quartet’s programs offered a remarkable spectrum of music from all periods, including premieres of major works by 20th century composers.

The Quartet became particularly well regarded as the leading interpreters of “The Second Viennese School,” performing complete cycles of the quartets of Schoenberg, Berg and Webern throughout the United States and Europe. The LaSalle Quartet’s Deutsche Grammophon recording of these complete cycles created a sensation in the music world, winning the Grand Prix du Disque in 1972. TIME Magazine called the album “a landmark in recorded music.” In 1978, the LaSalle again won the Grand Prix du Disque, this time for its recording of the Five Late Quartets by Beethoven. The following year, the Quartet won the Edison Prize for the first recording of Alexander Zemlinsky’s Second String Quartet.

As a member of the LaSalle Quartet, Kamnitzer helped to cement CCM’s reputation on the international stage. He retired in 1988 and spent the following years coaching chamber music in Austria and Israel, while also serving as judge for prestigious competitions like the Borciani Quartet Competition in Italy and others throughout the world.

The March 1 performance of CCM’s current string quartet-in-residence, the Ariel Quartet, will be presented in honor of Peter Kamnitzer. Our thoughts and prayers are with his family and friends during this time.