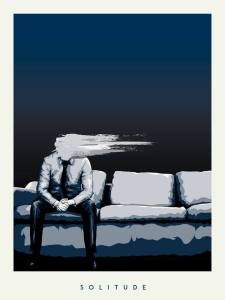 CCM E-Media hosts a world-premiere of the student-produced short film Solitude at 6:30 p.m. on Tuesday, Dec. 9, in the MainStreet Cinema of UC’s Tangeman University Center. Admission to this public screening is free and open to the general public.

Created by senior electronic media majors Matt Stalf, Cameron Coyan, Joey Meisberger and Alex Huddleson under the supervision of Assistant Professor of Electronic Media Lakshmi Tirumala, Solitude is the story of Jack Khavo, a medical researcher who finds himself trapped by his daily routine. Jack had always believed that he would be able to make a difference with his job, but as his research comes to a standstill he begins to wonder if he will ever be able to make a meaningful contribution to his field. One night Jack encounters a strange dream, which shows him how to move forward. Unfortunately, the very thing that could advance his research could also endanger his life.

According to Coyan, he and his classmates divided up production roles to best fit everyone’s strengths. “Matt has a great eye for scene composition so he took over the role of director of photography and editor,” he explains. “Alex and Joey have a lot of experience with audio, so they took on the role of pre-production recording and sound design. I took on the role of director and writer as I’m the most familiar with the story.”

“Being able to grab from several different programs – including Electronic Media and the Drama Department at CCM along with Graphic Design in DAAP – is really great because we are getting experience working through multiple creative fields to turn out a collaborative piece,” Stalf explains.

For Professor Tirumala, Solitude is a perfect showcase of the immersive training that CCM E-Media students receive. “This film gives a great insight into the standards that our program expects from the students,” he says. “Having seen the rough cut, I can say that everyone involved in this project has done an exceptional job.”

Get a closer look at the making of Solitude courtesy of the News Record by clicking here.

Admission
Admission to the public screening of Solitude is free and open to the general public. Reservations are not required.

For detailed maps and directions, please visit uc.edu/visitors. Additional parking is available off-campus at the new U Square complex on Calhoun Street and other neighboring lots.
____

You’ve rehearsed, studied, practiced, researched and performed at CCM for years, and now you’re ready to graduate!!! Congratulations to the Class of 2021. We are so proud of you.
Ever wonder what it’s like to do stunts in action films? Or how sex scenes on TV are directed? Listen to the latest episode of the School, Stage & Screen podcast to find out!
A new mural in the heart of Cincinnati’s Over-the-Rhine neighborhood features 19 UC alumni, including CCM alumna Betty Glover (BM Trombone, ‘44).
Start your week off with a new episode of our School, Stage & Screen #podcast 🎧. Episode 3 features alumna Diana Maria Riva, aka Detective Perez in Netflix’s “Dead to Me.”
Students: Opt-in now for a free, single-dose COVID-19 vaccine. Learn more: uc.edu/vaccine (link in bio).
Listen to Episode 1 of the new School, Stage & Screen podcast!! Titled “New G, O.G.” Alums Brian J. Leitten and Dylan Mulvaney go back and forth comparing their experiences in the industry, highlighting the years between them. You’ll also get a few tastes of interviews to come! Available on all of your favorite podcasting apps, and in our link in bio 🎉🎥🎬
The Hughes Project is tonight at 8:30 p.m./ 9 p.m./ 9:30 p.m!
The latest episode of CCMONSTAGE Online starts streaming at 7:30 p.m.! Tonight’s performance, “Travelogue,” is a 90-minute long mixed repertoire dance concert featuring the CCM Ballet Ensemble.
A message from CCM leadership: The rise in violence and bigotry against Asian and Asian American communities is reprehensible and unacceptable. CCM stands against discrimination in all forms — we value our community’s diverse experiences and perspectives and offer support in the face of adversity. Read Dean Stanley Romanstein’s full statement: https://bit.ly/3lvFt5M (link is also in our bio).
In response to the rise of Asian American hatred and violence President Neville G. Pinto released the following statement:
#Repost from @chm1220: “Music is life itself." Louis Armstrong Walking across the @uofcincy campus is good exercise for body and soul. Enjoy this 40 second musical interlude! @uc_ccm #NextLivesHere
Meet the new and improved Media Production Division at CCM (formerly E-Media). 21st-century storytellers enroll here to create impactful media content.
Tune in tonight at 7:30 p.m. to watch the next episode of our CCMONSTAGE Online video series! Tonight’s digital concert features the Ariel Quartet with CSO/CCM Diversity Fellows Cristian Diaz and Denielle Wilson. Click the link in our bio for details!
Musical Theatre alumna Jessica Hendy and Acting alumnus Richard Oberacker are collaborating to create a new musical, “With Beckett.” Based on Henry’s memoir, the one-woman show is about a mother’s resilience and journey to a new beginning.
Get your first taste of CCM’s Moveable Feast: From Coast to Coast. Featuring performances by students + alumni stars! Support CCM by enjoying the virtual fundraiser at 8 p.m. tomorrow, Jan. 22! Click the link in our bio for details and tickets.