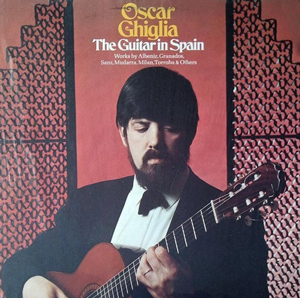 CCM guitarists have been the enthusiastic beneficiaries of Ghiglia’s concerts and master classes since 1974. He is the major and, perhaps, most persuasive exponent of Andrés Segovia-inspired European guitar playing.

In 1964, Andres Segovia invited Ghiglia to be his assistant in master classes in California. Since then, Ghiglia has given concerts and master classes throughout the world. In addition to appearing extensively in all parts of North and South America and Europe, he is a frequent performer in the Far East, Israel, Argentina, New Zealand and the South Pacific, and has recorded for Angel, Nonesuch and Stradivarius Records. While being active as a concert artist, Ghiglia has always favored teaching as a sister-profession. Very few well-known guitarists today have not at one time or another been in his classes and profited from his lessons.

Ghiglia is currently professor emeritus of guitar at the Basel Music-Akademie, and gives summer courses in Europe, America and the Middle East. He established the classical guitar summer program at Aspen, Colorado, and taught there for twenty years. He now regularly gives summer classes at the Festival d’Arc in southern France, at the Chigi Academy in Siena, Italy and at the Festival Gargnano, Italy. The Hartt School of Music awarded him an honorary doctorate in 2004 for his outstanding contributions to classical guitar teaching and performance. In 2009, the Guitar Foundation of America presented him with their prestigious Lifetime Achievement Award.

Admission
Admission is free and open to the general public. Reservations are not required.

A reception honoring Ghiglia’s 40th anniversary residency at CCM will be held in the Baur Room, immediately following the concert. This reception is also open to the public.