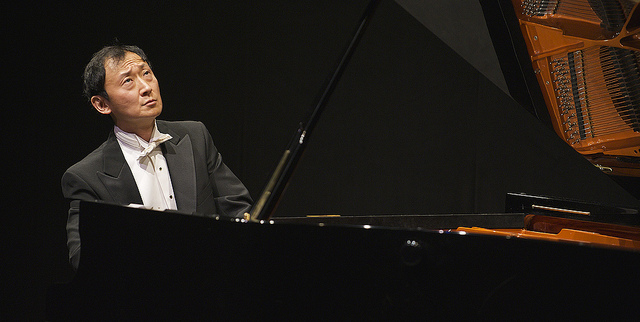 About Momoro Ono
Born in Yokohama, Japan, Momoro Ono studied piano in the United States, initially with Kathryna Barone at the Bryn Mawr Conservatory near Philadelphia. He later moved to Baltimore where he worked with Barbara English Maris at the Peabody Preparatory and Julian Martin. During his study with Julian Martin in his early teens, Ono won the Baltimore Symphony Youth Concerto Competition and First Prize in the Chopin Young Pianists Competition at Buffalo, New York. He appeared with the Meridian and Baltimore Symphony Orchestras. In addition, he performed in two tours including recitals in Atlanta and towns in Mississippi and Alabama. Later at the Juilliard School, Ono studied with Adele Marcus as a recipient of the William Petschek Piano Scholarship and received his Bachelor’s and Master’s degrees.

In 1980, Ono won the Silver Medal at the Three Rivers International Piano Competition from a field of over 130 pianists. Within two weeks, he also won first prize at the Gina Bachauer Memorial Competition at Juilliard and was featured on WQXR’s Young Artists Showcase. Orchestral appearances include one with the Pittsburgh Symphony-which was broadcast live on NPR. Mr. Ono has given numerous recitals in the US, including one at the Kennedy Center concert hall. He has performed chamber music in Glasgow and toured Japan as well. At the Peabody Conservatory, he studied with Leon Fleisher under full scholarship and received an Artist Diploma and Doctorate.

Chamber music studies include classes with Felix Galimir, Samuel Sanders and Earl Carlyss at Juilliard. At Peabody, he studied with Berl Senofsky, Shirley Givens and Ellen Mack. With his wife, violinist Heejoung Kim, the couple received coaching from members of the Guarneri Quartet at the University of Maryland. This led to the formation of the Kimono Duo, which has given numerous recitals in the US.

Ono has been on the music faculty at Creighton University since 2008. In recent years, he has given recitals at Seoul National University (where he also gave a master class) and at the University of Alaska at Anchorage, where he also judged a piano competition.

CCM is proud to be an All-Steinway School