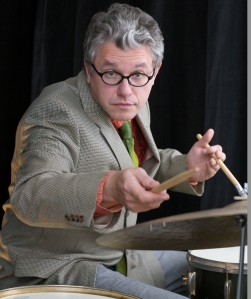 Audiences can look forward to a fun, quirky and upbeat performance when CCM’s Jazz Ensembles join forces with renowned guest artist Matt Wilson and his Arts and Crafts Ensemble at 4 p.m. on Sunday, February 9, in Corbett Auditorium. Tickets are on sale now.

Voted the number one “Rising Star Drummer” in Downbeat magazine’s Critic’s Poll for five consecutive years, Wilson is an ambassador for the jazz community known for blending his creativity and sense of humor with a versatile musicality, engaging audiences and musicians alike.

About Matt Wilson
New York based drummer and Grammy nominee Matt Wilson is one of todays most celebrated jazz artists. He is universally recognized for his musical and melodic drumming style as well as being a gifted composer, bandleader, producer and teaching artist. Wilson’s positive energy, sense of humor and ability to explore a broad range of musical settings keeps him in constant demand. In addition, Wilson’s dedication to jazz has helped establish him as a beloved world ambassador for the music, on and off the bandstand.

Recently, Wilson performed at the White House as part of an all-star jazz group for a State Dinner concert hosted by President Obama. Other performers included Herbie Hancock, Dee Dee Bridgewater, Dianne Reeves, Chris Botti, Randy Brecker, Antonio Hart and James Genus. Wilson was named the artist in residence at the Litchfield Jazz Festival where he conducted a much-heralded public interview with Dave Brubeck. In 2010, Wilson conducted over 250 outreach programs promoting jazz including an acclaimed Jazz for Young Peoples concert at Jazz at Lincoln Center.

Wilson was featured on the covers of both Downbeat and JazzTimes magazines in November 2009 and was for five consecutive years voted #1 “Rising Star Drummer” in the Downbeat Critic’s Poll. The readers of JazzTimes recently chose him as one of the top four drummers in the 2010 Readers Poll. In 2003, he was voted Drummer of the Year by the Jazz Journalists Association.

Purchasing Tickets
Tickets to “Arts and Crafts with M@ Wilson” are $12 for general admission, $6 for non-UC students, and free for UC students with ID.