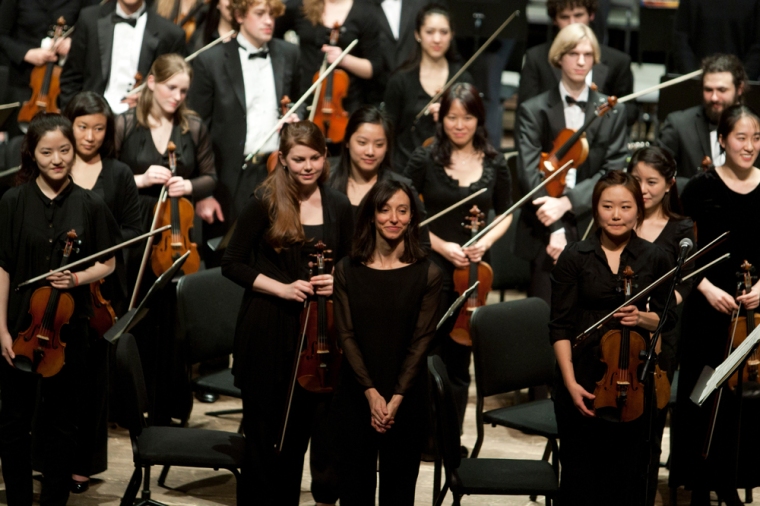 CCM welcomes Assistant Professor of Conducting Annunziata Tomaro back to the podium for a celebratory concert beginning at 8 p.m. on Friday, Feb. 7, in Corbett Auditorium. Tickets are on sale now.

After a year and a half hiatus, Tomaro makes her homecoming debut conducting CCM’s acclaimed Concert Orchestra in an unforgettable evening of music, with works by Pyotr Ilyich Tchaikovsky and Édouard Lalo, featuring the winner of the CCM Cello Concerto Competition, Yang Liu. “It’s wonderful being with the students again,” Tomaro says. “They are playing their hearts out in this music!”

The opening piece of the program will be Modest Mussorgsky’s introduction to his opera Khovanshchina. Audience members will also be delighted to hear Tchaikovsky’s Symphony No. 6 in B minor, Op. 74, “Pathétique,” his final completed symphony (Opp. 75–80 were published after Tchaikovsky’s death).

And lastly, audience members will be treated to Édouard Lalo’s Cello Concerto in D Minor, featuring  Cello Concerto Competition winner Yang Liu, a student of CCM Professor of Violoncello Yehuda Hanani. Lalo wrote his Cello Concerto in D minor in 1876, in collaboration with Parisian cellist Adolphe Fischer. The work was premiered the following year at the Cirque d’Hiver with Fischer as soloist.

About Annunziata Tomaro
Praised as a “rising light in the musical firmament,” Annunziata Tomaro is equally at home in symphonic, operatic and contemporary repertoire. As founder and music director of The Phoenix Ensemble in Ann Arbor, Michigan, Tomaro collaborated with distinguished artists such as William Bolcom and Peter Sparling. During her tenure as conductor and music director of the Opera Theater and Music Festival of Lucca, Italy, Tomaro led new productions of operas by Wolf-Ferrari and Puccini as well as notable concert and choral performances. In 2010, Tomaro conducted concert and opera performances at the Spoleto Festival in Italy. She was recently appointed associate conductor of the Cincinnati Chamber Orchestra. Since 2007, Tomaro has been music director and principal conductor of the CCM Concert Orchestra and the contemporary ensemble, Café MoMus in Cincinnati. Among her many podium appearances at CCM are celebrated performances of Mahler and Shostakovich, as well as world and regional premieres of works by Kaija Saariaho, Cynthia Wong and Conrad Susa.

Having served as music director of the Central Kentucky Youth Symphony, Tomaro is a strong advocate of music education and an inspiring leader of younger musicians. She is highly sought after as a conductor of university and youth orchestras. Her award-winning live recording with The Phoenix Ensemble, “The Orchestra is Here to Play!” has become an instant classic with young audiences.

Recent prizewinner of the 2010 International “Antonio Pedrotti” Conducting Competition, Tomaro’s honors include the Robinson Award, presented by the Conductor’s Guild, in 1998 and the Presser Award in 2006, which led her to Lucerne, Switzerland to observe and discuss conducting with Claudio Abbado. In 2004, she participated in the prestigious Jorma Panula master class in Berlin, Germany. The following year, Tomaro was chosen as a Fulbright scholar and returned to Berlin, where she had the honor of being a guest in the rehearsals of Sir Simon Rattle and the Berlin Philharmonic, and Daniel Barenboim at the Staatsoper unter den Linden. In 2008, she was one of only four Americans invited to the 2nd Concurso Internacional “Jesús López Cobos” in Madrid, Spain. The League of American Orchestras awarded Ms. Tomaro an “outstanding woman conductor” grant in 2010.

Since beginning her musical studies at the Juilliard School Pre-College Division, Tomaro has worked with some of the world’s most recognized conducting pedagogues including Gustav Meier, Kenneth Kiesler, Mark Gibson, Larry Rachleff and Jorma Panula.

Purchasing Tickets
Tickets to this CCM Concert Orchestra performance are $12 for general admission, $6 for non-UC students and FREE for UC students with valid ID.