CCM’s celebration of Benjamin Britten at 100 continues with the Cincinnati premiere of the composer’s penultimate opera Owen Wingrave, running Nov. 21-24 in Patricia Corbett Theater. CCM welcomes guest artist and alumnus Johannes Müller-Stosch to the podium for this Mainstage Series production, which features stage direction by CCM Professor of Voice Kenneth Shaw. The opera will be sung in English with supertitles.

Based on the 1893 Henry James short story of the same name and commissioned by the BBC in 1966, Owen Wingrave was completed for television in 1970. With music by Britten and a libretto by his frequent collaborator Myfanwy Piper, Shaw suggests that the opera offers “both drama and a touch of lightness, horror and hope, mystery and atmosphere, grandeur and intimacy.”

Owen Wingrave is often regarded as one of Britten’s most powerful scores. According to Shaw, the music of Owen Wingrave is exceptionally challenging, making it ideal for training students. The opera story is equally compelling and is centered on the titular Owen Wingrave, a pacifist born into a long line of military heroes who struggles to prove his inner strength to his disapproving family, even if it leads to his own mysterious end. “A secret is something that has resonance for all of us,” Shaw explains. “We keep secrets, and secrets are kept from us. For the Wingrave family, their secret doesn’t really have a full answer – it is a mystery.” 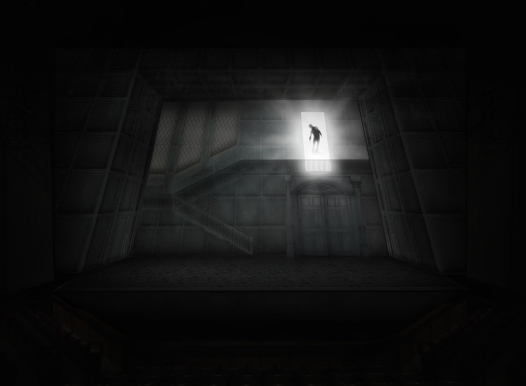 Set in Edwardian England, this production of Owen Wingrave has maintained the realism of its characters but the set and transitions between scenes have been carefully stylized. On stage, CCM senior and Owen Wingrave scenic designer Gabriel Firestone has streamlined each scene to suggest the location, while also maintaining a sense of grandeur and mood. “Owen Wingrave is unique in that it was originally conceived for television — not the stage,” explains Firestone. “In film, you have the ability to cut between two or three entirely different locations instantaneously, whereas on stage, scenic transitions take much longer. As scenic designer, I’ve worked with the director and other members of the design team to figure out how the story moves from location to location in a concise yet evocative way.”

A first look at the ‘Owen Wingrave’ set, courtesy of Emily Krueger.

As is the case with most of CCM’s opera productions, every role in Owen Wingrave is double cast (with the exceptions of Lechmere and Sir Philip Wingrave) in order to give performance opportunities to as many students as possible. First year master’s student Simon Barrad and first year artist’s diploma student Edward Nelson are cast in the title role. View the full cast list here.

“It gives me a chance to look at how someone else interprets the role and gives me someone else to bounce ideas off of. However, we are choosing to play Owen in different ways and finding the things about the character that resonate with us personally,” says Barrad on being double cast.

“Owen, as much as he fights it, is very much a Wingrave in his resolve and his courage under fire. He is emotional and passionate about his peaceful beliefs and not at all concerned with the pragmatism of his ideas. I believe the only thing keeping him from leaving the Wingrave family without a word is fear of isolation and even more specifically loneliness — a complete starvation from lack of love.”

Shaw suggests that a single line sung very quietly and simply by Owen in the second act, best captures the theme of the opera: “Peace is not silent, it is the voice of love.”

About the Guest Choir
CCM’s production of Owen Wingrave also features a special collaboration with the Cincinnati Boychoir, directed by Christopher Eanes. With the expertise of CCM’s Division of Electronic Media, audience members will hear a recording of the Cincinnati Boychoir on stage in the prologue for Act 2, as their voices echo the story told by the narrator.

Since 1965, the Cincinnati Boychoir has been dedicated to the musical, intellectual and emotional development of young men and has served as one of the foremost music education and performance organizations in the region. Now in its 49th season, the Cincinnati Boychoir is recognized as one of the premiere Boychoirs in the United States. Located in the Over-the-Rhine neighborhood of Cincinnati, the Boychoir reaches approximately 200 young men each year from more than 75 schools in Ohio, Kentucky and Indiana. Its mission focuses on reaching under-served parts of the region and supporting the revitalization of the downtown area. Boys audition for the choir by recommendation of school music teachers and attend weekly rehearsals, retreats, music-theory classes and the annual SongFest Summer Music Camp for Boys at Xavier University.

About Benjamin Britten
Benjamin Britten was born in Lowestoft in 1913. His mother, a keen amateur singer, was thrilled that her youngest was born on Nov. 22, the feast day of St Cecilia, the patron saint of music. She hoped he would become the “Fourth B,” after Bach, Beethoven and Brahms.

Britten did indeed become a global musical figure. In just 63 busy years, he wrote some of the most appealing classical music of the 20th century, was hailed as one of the all-time great opera composers and – with his partner, the singer Peter Pears – performed around the world.

With early influences by Stravinsky, Mahler, Berg and the writing of W.H. Auden, Britten’s themes range from demon possession to doomed ideals, historical re-creation to a revamping of the “village fool” concept.

His operas were performed in English making them widely popular through England and America at the time. Finally, Britten’s operas were focused on many social concerns. Britten was a progressive cultural figure too, ahead of his time on issues including pacifism, homosexuality and the role of artists in their communities.

Britten’s musical style is part of the reason that his operas were so acclaimed. From his orchestral work, he took a broadened sense or melodic variation and harmony, 12-note elements and a style of music based on the Indian raga. Britten was a master of poetic text painting, or the illustration of words in a libretto through music. His general style did not conform to any established paths.

Pre-Performance Talk
The opening night performance of Owen Wingrave will be preceded by a talk featuring  Professor of Musicology Jeongwong Joe,  Professor of Opera and Distinguished Chair in Opera Robin Guarino,  Professor of Voice Kenneth Shaw and Adjunct faculty member Junghyun Cho. Professor Joe will present a historical introduction to Owen Wingrave, which will be followed by a discussion about CCM’s production.

Tickets can be purchased in person at the CCM Box Office, over the telephone at 513-556-4183 or online at ccm.uc.edu/boxoffice/owenwingrave