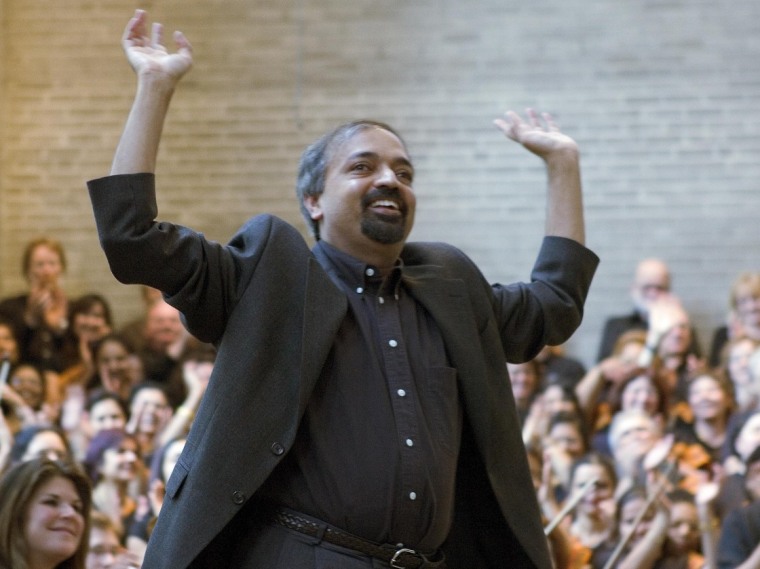 Kanniks with the choir at St. Johns Unitarian Church in Cincinnati in 2004.

You can listen to the entire Morning Edition segment here.

Kanniks Kannikeswaran is a pioneer of the Indian American choral movement. His far reaching work in this area has led to the founding of Indian community choirs in not only Cincinnati, but also Washington, D.C.; Houston; Tampa and Fort Lauderdale, Fla.; Minneapolis-St. Paul; Allentown, Pa.; Toronto; and, most recently, The Hague.

He has collaborated with artists such as Lakshmi Shankar, Mallika Sarabhai, with the Cincinnati Chamber Orchestra and with institutions such as the National University of Singapore in producing crisp innovative works that convey the message of universal connectedness.

His magnum opus Shanti – A Journey of Peace has personally touched the lives of over 900 performers and has been seen by over 9000 even as many more communities are gearing towards performing this work.

Kanniks has undergone training in Indian Classical music since the age of eight. His repertoire includes a large number of compositions of the 18th century composer Muthuswami Dikshitar and a number of dhrupads. His award winning research on the 18th century Indo-colonial music of Dikshitar is beginning to have an impact on Indian musical pedagogy. His archival recording – the first ever compilation of this genre (2008) has won wide acclaim.

Kanniks is often described as a renaissance personality who effortlessly traverses diverse disciplines such as music, spirituality and management. His work is much sought after worldwide and he has delivered lectures on Indian music in Singapore, Trinidad, and in several cities in the United States

Kanniks is a visiting artist at the University of South Florida. He has been teaching Indian music theory and history as an adjunct faculty at CCM since 1994.

Below, watch an Our Ohio video feature on Kanniks and the Greater Cincinnati Indian Community Choir: