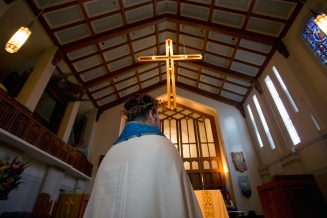 CCM’s Chamber Choir and Philharmonia Chamber Orchestra join forces to perform a unique staged production of Johann Sebastian Bach’s visceral rendering of the St. John Passion as the next installment in CCM’s 2013-14 Prestige Concert Series. The monumental work will be presented at 5 p.m. on Sunday, Nov. 3, at Christ Church Cathedral under the direction of Earl Rivers, staged by Omer Ben-Seadia, and in conjunction with the Constella Festival of Music and Fine Arts.

Bach composed his St. John Passion for the congregations of Leipzig, Germany for Good Friday services in April 1724. The story is narrated by the character of the Evangelist and emphasizes the conflict of Pontius Pilate. “Bach’s interpretation provides us with a dramatic and physiological account,” explains stage director and Artist Diploma directing student Omer Ben-Seadia. “The staging will portray the drama through symbolic elements and light. The text and historical reflection are just as pungent today as ever – and the staging confronts these truths head on.” Ben-Seadia will also direct CCM’s Mainstage Series production of Don Pasquale in April 2014.

“Performances of Bach’s Passions, particularly in light of the attention that Mel Gibson’s film The Passion of the Christ received, present an opportunity for Christians and Jews to confront issues of religious intolerance, and the role of the arts and how the arts might, advertently or inadvertently, promote intolerance,” explains conductor and Director of Choral Studies Earl Rivers. “By exploring these issues, we will know the music better and we will know each other better.”

The concert will be performed at the magnificent setting of Christ Church Cathedral, which enjoys a long tradition of great choral music and is hosting the collaboration between CCM’s Chamber Choir and Philharmonia Chamber Orchestra and the Constella Festival for a second year. In 2010, the CCM Chamber Choir and Philharmonia Orchestra presented the 400th Anniversary of Monteverdi’s Vespers of 1610 at the downtown location, and the Cathedral presents a wide variety of performances throughout the year.

About Jeffrey Thompson
Soon after completing his studies at CCM under Professor of Voice William McGraw, tenor Jeffrey Thompson was awarded first prize in the Concours International de Chant Baroque de Chimay in Belgium by a jury led by William Christie. In 2002 he was selected to participate in the first Le Jardin des Voix with William Christie’s Les Arts Florissants, in a tour of baroque works in Europe’s most prestigious theatres. This resulted in a series of concerts with Les Arts Florissants, including Handel’s Acis and Galatea and Hercules, and motets of Etienne Moulinié. For Virgin Classics, Thompson participated in the recording of Charpentier’s Grande Messe des Morts, and sang the part of La Pythonisse in the same composer’s David et Jonathas. In 2004, he sang the tenor solos in Rameau’s motet In Convertendo Dominus with Les Arts Florissants released on an Opus Arte DVD. Thompson has also recorded motets and cantatas of Sébastien de Brossard with La Rêveuse, released in the spring of 2011, and Grétry’s Le Magnifique with Opera Lafayette. Recent and upcoming engagements include a concert tour with Le Parnasse Français and the title rôles in Rameau’s Hippolyte et Aricie and Handel’s Judas Maccabeus in Budapest.

About Earl Rivers
Earl Rivers’ graduate conducting program at CCM has been recognized by U.S. News and World Report as among the top five programs in the USA, and CCM’s Choral Program holds the Dale Warland Singers Score Library and Archives, the most significant collection of contemporary choral music in the country.

His recent guest conducting engagements include the Festival of the Aegean in Syros, Greece; the Korean premiere of Arvo Pärt’s Berliner Masswith South Korea’s Incheon City Chorale; Haydn’s Nelson Mass; Mozart’s Coronation Mass and John Rutter’s Requiem in Carnegie Hall, as well as a residency (including a concert and teaching engagement) at the Sichuan Conservatory in Chengdu, China.

Rivers has taught conducting and led master classes at the Taipei International Choral Festival in Taiwan, in Seoul, South Korea, and at The Juilliard School. He was an Adjudicator and Lecturer at the World Choir Games in Shaoxing, China in 2010 and served as Artistic Director for the Cincinnati Organizing Committee of the 2012 World Choir Games, which were held in Cincinnati in July 2012.

Rivers is a recipient of Choral America’s “Michael Korn Founders Award for Development of the Choral Art,” honoring a lifetime of significant contributions to the professional choral art. Rivers is a long-time member of the Board of Directors of Chorus America, the national service organization to develop and promote professional, volunteer and youth choruses.

About the Constella Festival of Music and Fine Arts
The Constella Festival was created to showcase the depth and breadth of musical and artistic life in Cincinnati. The Festival presents unique collaborations between international artists of the highest caliber in partnership with local performing arts organizations, enabling a position of shared intent and strengthening the future of the arts in Cincinnati. Running from Oct. 1 to Nov. 7, the Festival presents 20 concerts at 15 Cincinnati venues, including world-premiere music and dance works, children’s concerts, workshops and masterclasses, as well as the return of violin superstar Joshua Bell and the first-ever Constella Festival appearance by Grammy Award-winning conductor Paavo Jarvi. More information about the Constella Festival can be found at www.constellafestival.org.

Purchasing Tickets
Tickets to Johann Sebastian Bach’s St. John Passion are $20 for general admission, $15 for non-UC students, and FREE for UC students with a valid ID. Tickets can be purchased in person at the CCM Box Office, over the telephone at 513-556-4183 or online through CCM’s Tickets.com eBox Office. Tickets will also be available beginning at 4 p.m. on the day of the performance at Christ Church Cathedral, cash only at the door.

CCM’s production of Bach’s St. John Passion is supported by a generous grant from the Willard and Jean Mulford Charitable Fund of the Cambridge Charitable Foundation and a grant from CCM’s Tangeman Sacred Music Center.