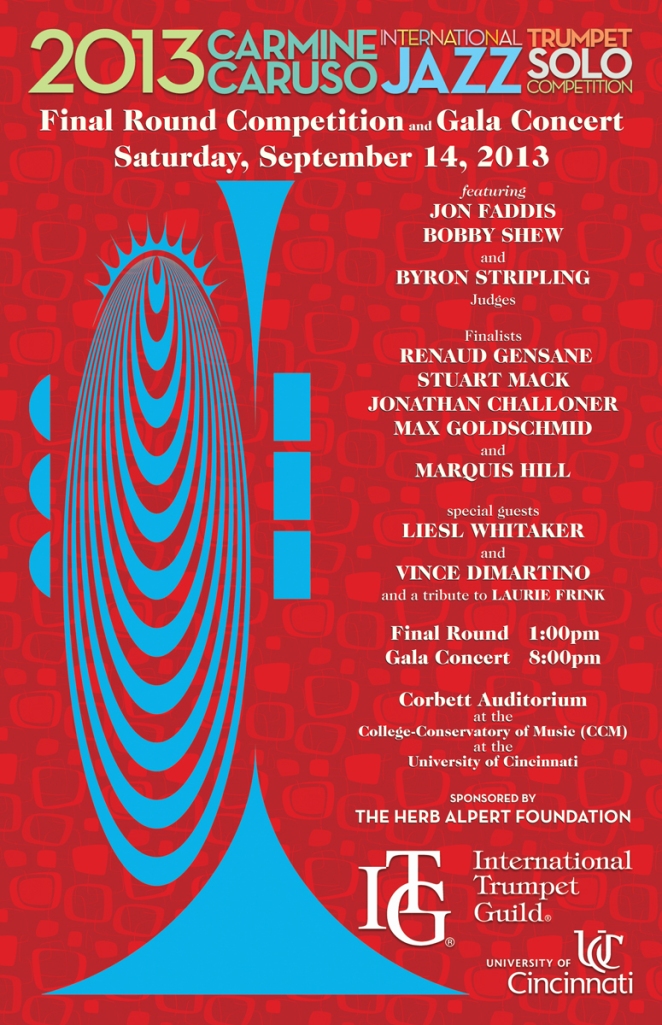 CCM proudly presents the final round of the 2013 Carmine Caruso International Jazz Trumpet Competition on Sept. 14.

The world’s best up-and-coming jazz trumpet players will converge at the University of Cincinnati College-Conservatory of Music (CCM) this month to compete for $15,000 in total prizes during the International Trumpet Guild‘s 2013 Carmine Caruso International Jazz Trumpet Solo Competition, hosted by the Herb Alpert Foundation.

From a pool of 32 contenders hailing from all four corners of the globe, five finalists will strive to craft the most creative solos in exciting displays of virtuosity and artistry during the Competition’s Final Round, which will take place from 1 p.m.-4:30 p.m. on Saturday, Sept. 14, in CCM’s Corbett Auditorium on the campus of the University of Cincinnati. This event is free and open to the general public, and it will also be streamed live on Livestream (link below).

Three of the most famous and successful jazz trumpet performers of the last 40 years will judge this year’s competition, including:

In honor of the legendary brass pedagogue and author for whom the competition is named, the Competition’s Final Round will be preceded by a Caruso Clinic at 10 a.m. on Saturday, Sept. 14, in CCM’s Cohen Family Studio Theater. Clinicians Vince DiMartino and Liesl Whitaker will lead this stimulating session, which is free and open to the public.

Following the final round of the competition, CCM Jazz will present a Gala Concert, complete with performances by the finalists, judges and clinicians. The Cincinnati Contemporary Jazz Orchestra will accompany the soloists, led by artistic director and CCM Jazz Studies director Scott Belck, DMA. This exciting event is also free and will begin at 8 p.m. on Saturday, Sept. 14 in Corbett Auditorium.

About the Carmine Caruso International Jazz Trumpet Solo Competition
First held in 1993, the Carmine Caruso International Jazz Trumpet Competition is considered the most prestigious competition for jazz trumpeters in the world. Held every two years, the competition is sponsored by the International Trumpet Guild and supported by a grant from the Herb Alpert Foundation. CCM faculty members Scott Belck, Kim Pensyl and Alan Siebert serve as hosts of this year’s competition. Past winners include Blue Note recording artist Ambrose Akinmusire, Jason Palmer and Benny Benack. Learn more about this year’s competition by visiting uc.edu/events/caruso.

About Carmine Caruso
Carmine Caruso was born on Nov. 2, 1904, and lived his entire life in New York. Caruso took his first trumpet student in 1942, and within a year had 40 brass students. Brass players from all over the world traveled to New York to study with him, and he developed a reputation for being able to help players improve.

Although he played all of the woodwind and string instruments, Caruso made his living as a saxophone player, performing in ballrooms and on radio shows. He played his last club date on his 70th birthday in 1974 and passed away on May 26, 1987.

Location: The Corbett Center for the Performing Arts, CCM Village, University of Cincinnati

Admission: FREE and open to the general public. Reservations are not required.

Live Online Streaming: Audiences can enjoy streaming video from the final round of the Carmine Caruso Competition by visitinghttp://new.livestream.com/accounts/5290676/events/2375502.