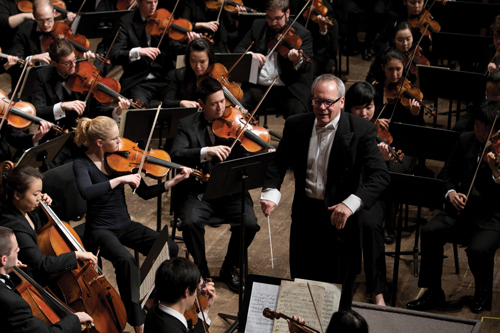 Mark Gibson and the CCM Philharmonia. Photography by Dottie Stover.

CCM’s internationally-renowned Philharmonia Orchestra will be coming to a television near you this month courtesy of CET, Cincinnati Public Television. The CET Arts channel will premiere CCM’s Orchestra Series: Mahler’s Symphony No. 3 in D Minor at 8 p.m. on Monday, June 10.

This broadcast is part of an ongoing collaboration between CCM and CET, which will bring CCM’s world-class performances to PBS viewers throughout the Greater Cincinnati viewing area. CET Arts, which is celebrating three years on-air, brings the world stage to Greater Cincinnati and showcases the arts in our community.

Recorded in March, this performance was part of CCM’s day-long “Mahler Marathon,” which featured performances of Gustav Mahler’s Third and Fourth Symphonies and other selections by the CCM Philharmonia and Concert Orchestras. CCM Director of Orchestral Studies Mark Gibson conducted the entire “marathon” performance.

“The Third and Fourth Symphonies of Mahler… outline the progress of humankind from earthly life to heavenly life,” Gibson explains. “I, along with 300 gifted student performers in our orchestras and choruses, look forward to sharing this unique spiritual and sonic journey with the Cincinnati public.”

The performance is dedicated to the memory of loyal arts patron and UC alumna Louise Dieterle Nippert, who passed away in July of 2012 at the age of 100. Through Mrs. Nippert’s generous support, the Dieterle Vocal Arts Center opened in CCM Village in January 1995. In addition to her and her late husband’s significant contributions to the renovation and creation of the CCM Village, Mr. and Mrs. Nippert endowed a number of chairs at CCM, including the Thomas James Kelly Chair, the Dieterle Chair of Music in Memory of George Andreas and Elsa Fischer Dieterle and the Dieterle Chair of Voice. They have also been influential in the transformation of countless students’ lives by creating and donating to numerous scholarship funds at CCM.

For additional details and the most up-to-date broadcast information, please visit CETConnect.org.