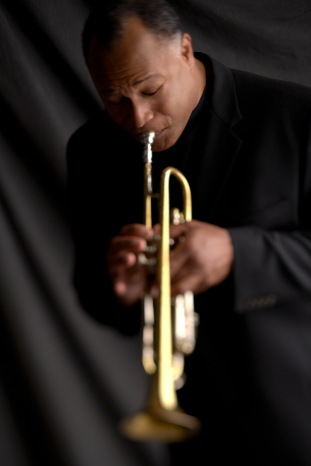 Hear the hits of the legendary “Satchmo” and his hometown of New Orleans brought to life as Stripling joins CCM’s big bands on stage for one night only. Tickets are on sale now.

Below, watch Stripling perform “Shine” in a previous concert tribute to Louis Armstrong.

About Byron Stripling
Byron Stripling began his relationship with the trumpet at the age of 10. His father was the choir director at a church, so he fell naturally into singing, as well. Stripling enrolled at the Eastman School of Music with plans to become classical trumpeter, but was offered a job with Lionel Hampton before he could complete his degree. He left Eastman to join Hampton’s band, and the opportunities that followed shaped his career for life. Stripling played a string of influential gigs, including a stint with the Woody Herman Orchestra, touring with the Count Basie Orchestra and eventually acting as the lead in the musical Satchmo: America’s Musical Legend.

In 2002, Stripling became the artistic director and conductor of the Columbus Jazz Orchestra. He has presented such guest artists as Branford Marsalis, Chuck Mangione, Patti Austin, John Pizzarelli, Mavis Staples, Melba Moore and Wycliffe Gordon, but remains the orchestra’s biggest draw. Stripling also makes many guest appearances with pop orchestras, conducts clinics and seminars and tours extensively with his own quartet. His performances are full of remarkable musicianship, wit, showmanship and a joyous spirit.

Purchasing Tickets
Tickets to “Way Down Yonder in New Orleans” are $12 for general audiences, $6 for non-UC students. UC student tickets are FREE. Tickets can be purchased in person at the CCM Box Office, over the telephone at 513-556-4183 or online at ccm.uc.edu/boxoffice.