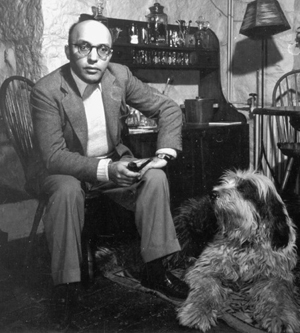 Beginning this month, CCM will celebrate the iconic work and enduring legacy of composer Kurt Weill with an unprecedented series of events. Opening on Friday, Oct. 19, and running through Tuesday, March 12, CCM’s Kurt Weill Festival will incorporate the renowned theatre composer into a broad range of both public performances and classroom exercises.

CCM’s yearlong Kurt Weill Festival will include Mainstage opera and musical theatre productions, cabaret performances, collaborative concerts, master classes and more. Funded in part by the Kurt Weill Foundation for Music, CCM has never before hosted a festival of this magnitude.

“An inter-disciplinary series featuring productions of Street Scene and The Threepenny Opera – two very different stage works from Weill’s wide-ranging output – illustrates CCM’s renowned versatility in diverse genres of musical theatre,” explains Kurt Weill Foundation Director Carolyn Weber. “The schedule of stage productions, concerts and ancillary activities, unprecedented in scope in an academic context, has inspired the Foundation to expand its sponsorship program to cover leading academic institutions in addition to professional performing arts organizations, and we hope the CCM festival will set the stage for other such sponsorships in the future.”

“The Kurt Weill Festival was born out of the kind of collaborations and synchronicities that are a unique part of the CCM experience,” says Robin Guarino, CCM’s J. Ralph Corbett Chair of Opera. “Last spring Aubrey Berg (CCM’s Patricia A. Corbett Distinguished Chair of Musical Theater) approached me about directing The Threepenny Opera as part of the Musical Theatre program’s Mainstage Series. As it happened, the Opera Department had just decided to produce Weill’s Street Scene for the first time in the history of the school. At the same time, Associate Professor of Musicology and resident Weill Scholar bruce mcclung and Director of Orchestral Studies Mark Gibson began discussions about programming a Weill cabaret project as part of a collaboration between CCM’s departments of opera, orchestral studies and jazz studies with bruce mcclung acting as Dramaturg.”

From these beginnings, the festival has grown to become a near-college-wide celebration of Weill’s music, with CCM’s choral, jazz, musical theatre, opera and orchestral programs incorporating the composer’s work into their 2012-13 programs. In turn, this programming has created opportunities for exciting new collaborations with CCM’s electronic media, musicology and theatre design & production departments.

This broad, cross-disciplinary appeal makes perfect sense to mcclung, who characterizes Weill as “a prototypical crossover composer.” A recipient of the Kurt Weill prize in 2007, mcclung explains, “Weill’s music engages with the central aesthetic debates of our time: elitism versus populism, autonomy versus accessibility and modernism versus postmodernism.”

Festival highlights also include fully staged productions of two of the composer’s most important works: Street Scene (Nov. 15 – 18) and The Threepenny Opera (Feb. 28 – March 10) along with concert performances of Weill’s Kiddush (Prayer of Sanctification) and the a capella madrigal “Ho, Billy, O!” from the Weill musical Love Life (1948).

*Note: the Nov. 15 performance of Street Scene will be preceded by a pre-show lecture by Kurt Weill Foundation President Kim Kowalke at 7:15 p.m. in the Baur Room.
_____

*Note: The March 1 performance of The Threepenny Opera will be preceded by a pre-show lecture by Howard Pollack at 7:15 p.m. in the Baur Room.
_____

Purchasing Tickets
Tickets can be purchased in person at the CCM Box Office, over the telephone at 513-556-4183 or online at ccm.uc.edu/boxoffice.

About Kurt Weill
The son of a cantor, Kurt Weill (1900-50) was raised in a religious Jewish home in Dessau, Germany. He took an early interest in music; his first teacher was Albert Bing, conductor at the local opera house. At eighteen, Weill went to Berlin, experiencing its political and artistic ferment firsthand. A few months’ study with Engelbert Humperdinck did not satisfy him, but late in 1920 he began an intensive association with Ferruccio Busoni in the composition seminar at the Akademie der Künste. By the end of 1923, he had had five full-length works performed in Germany. The next few years brought further success: a popular violin concerto and his first opera, The Protagonist (1926, Georg Kaiser). Through Kaiser, Weill met the actress Lotte Lenya in Berlin in 1924, and they married in January 1926. They were divorced from 1933-37, but they remarried and stayed together until his death.

Weill’s early works show the influence of post-romanticism, expressionism, even atonality. Yet the desire to create “freer, lighter, and simpler” music grew on him. The early operas Royal Palace (1927) and The Czar Has his Photograph Taken (1928) show the influence of jazz and popular music. He began working with Bertolt Brecht in the spring of 1927, setting the “Mahagonny” poems. Mahagonny‘s hummable tunes and thoroughgoing popular influence seemed calculated to shock the avant-garde; the charge that he had “sold out” to commercialism and abandoned art followed him thereafter. Later compositions, like The Threepenny Opera and Rise and Fall of the City of Mahagonny elaborated on his popular style. But a much different style animates other works with Brecht, such as He Who Says Yes, an opera for students, and The Lindbergh Flight, a cantata.

The collaboration with Brecht ended around 1930, and Weill’s last two compositions in Germany were written with others: The Pledge (1932, Caspar Neher) and The Silver Lake (1933, Georg Kaiser). Hitler’s ascent in 1933 forced Weill to leave Germany, never to return. He spent two frustrating years in Paris, finding little sympathy for his new compositions: The Seven Deadly Sins (1933, Brecht), A Kingdom for a Cow (1935, Robert Vambery), and the Second Symphony (1934). His work on The Eternal Road (1937, Franz Werfel), a pageant based on the Old Testament, brought him to the U.S. in September 1935.

Weill’s American career was as active as his European career. He had two major successes on Broadway: Lady in the Dark (1941, Moss Hart and Ira Gershwin) and One Touch of Venus (1943, Ogden Nash and S.J. Perelman). His most important works for Broadway, at least in terms of influence, were probably Street Scene (1947, Elmer Rice and Langston Hughes) and Love Life (1948, Alan Jay Lerner). Weill considered Street Scene a “Broadway opera,” and his project of making opera more palatable to Broadway audiences was carried forward by Menotti, Blitzstein and Bernstein. Several experts have pointed to Love Life as the precursor of the “concept musical,” influencing Fosse, Sondheim, and Kander and Ebb. All together, he brought eight shows to Broadway and saw three other stage works produced in the U.S.

Weill’s constant hard work and family history of hypertension caught up with him early in 1950. While his last work, Lost in the Stars (1949, Maxwell Anderson), still ran on Broadway, and shortly after he and Anderson had begun a musical version of Huckleberry Finn, Weill had a heart attack and was hospitalized in New York City, where he died on April 3.