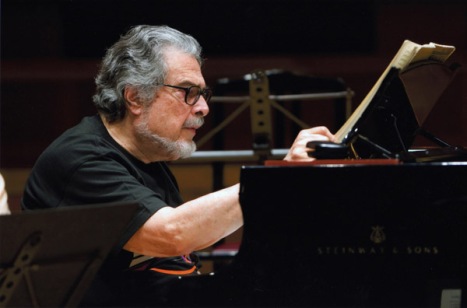 Recipient of the 2007 Kennedy Center Honors and subject of the 2006 Oscar-nominated short documentary Two Hands: The Leon Fleisher Story, Fleisher is widely recognized as one of the world’s truly great artists.

Fleisher will lead master classes in UC’s Robert J. Werner Recital Hall from 10-11:30 a.m. this Saturday and from 2-4 p.m. this Sunday. Both sessions are open to the general public, but seating is limited.

“A Master Class with Leon Fleisher”
Hosted by Eugene and Elisabeth Pridonoff
2-4 p.m. on Sunday, Oct. 7:

Fleisher will also lead a discussion on Beethoven Piano Sonatas on Monday, Oct. 8, in a 10-11:30 a.m. session hosted by Michael Chertock.

About Leon Fleisher
Legendary pianist Leon Fleisher represents the gold standard of musicianship and, at 84 years young, he continues to impart his life-affirming artistry throughout the world, thriving in a sustained career as conductor and soloist, recitalist, chamber music artist and master class mentor. Fleisher’s musical pedigree alone is remarkable: he was the youngest-ever student of the great Artur Schnabel, who studied with keyboard giant and pedagogue Theodor Leschetizky, a pupil of Carl Czerny, who in turn studied with Ludwig van Beethoven.

First-generation American, Fleisher was born in San Francisco, 1928, and began playing piano at the age of four. To his delight, he was withdrawn from kindergarten and set up with a succession of private tutors, which constituted his formal education for the rest of his childhood. (Fleisher jokes, “I’ve long thought of entitling my autobiography I Was a Kindergarten Dropout.”) He gave his first public recital at age eight, and was thrust into the relatively new classical music scene in San Francisco and those who influenced it, including Alfred Hertz, the second-ever director of the San Francisco Symphony, and the great French conductor, Pierre Monteux. There he first met Artur Schnabel – an event that was undoubtedly the most consequential in Fleisher’s musical life – which set in motion a lifelong connection to music, beyond simply the piano. Fleisher made his formal public debut with the New York Philharmonic in 1944 under the baton of Pierre Monteux, who famously recognized Fleisher as “the pianistic find of the century.”

In 1952, Fleisher became the first American to win the prestigious Queen Elisabeth competition in Brussels, placing him among the world’s premier classical pianists. He concertized with every major orchestra and made numerous touchstone recordings for Columbia/Epic (now Sony) under the direction of George Szell and the Cleveland Orchestra. At the height of his success in 1965, he was suddenly struck silent at age 36 with a neurological affliction later identified as focal dystonia, rendering two fingers on his right hand immobile. Rather than end his career, Fleisher set off on an epic journey in search of a renewed life in music. He began focusing on repertoire for the left hand only, forging a new path as a soloist, conductor and teacher. In 1985 he was named Artistic Director of Tanglewood; he launched a conducting career as co-founder of the Theater Chamber Players in Baltimore, then with the Annapolis and Baltimore Symphony Orchestras. He re-established himself as a left-handed soloist and recording artist, achieving a standard equal to his early glory.

In the new millennium, experimental treatments using a regimen of Rolfing and ‘botulinum toxin’ (Botox) injections finally restored the mobility in Fleisher’s right hand. The extraordinary renaissance of Fleisher’s career has been documented extensively, particularly around the 2004 release of his critically acclaimed album Two Hands, which went on to hold a top 5 Billboard Chart position. The New York Times, Washington Post, LA Times, Billboard, Gramophone and many others hailed it as one of the top recordings of its year, in any genre. He has since made several recordings including The Journey (Vanguard Classics, 2006); as soloist on the Emerson String Quartet’s Brahms featuring the Piano Quintet in f minor (Deutsche Grammophon, 2007), a world premiere recording of Hindemith’s Klaviermusik mit Orchester (Ondine, 2009), and his first two-handed concerto recording in 40 years, Mozart Piano Concertos (Sony, 2009). In 2008, Sony re-issued Fleisher’s deep catalog, making virtually all of his recordings available on CD or digital downloads. Fleisher’s Brahms piano concerto recordings are still considered definitive today and his recordings of the five Beethoven concertos on Columbia were inducted into the Grammy Hall of Fame in 2008.

Fleisher holds numerous honors including the Johns Hopkins University President’s Medal and honorary doctorates from the San Francisco Conservatory of Music, Amherst College, Boston Conservatory, Cleveland Institute of Music, Juilliard School of Music and Peabody Institute. In 2005, the French government named him Commander in the French Order of Arts and Letters, the highest rank of its kind. He was Musical America’s 1994 “Instrumentalist of the Year,” and this year was named the Royal Philharmonic Society’s “Instrumentalist of the Year.” Fleisher received the 2007 Kennedy Center Honors for his contribution to U.S. culture. His memoir, My Nine Lives: A Memoir of Many Careers in Music, co-written with Washington Post music critic Anne Midgette, is available on Doubleday. He and his wife, Katherine Jacobson Fleisher, a noted pianist with whom he frequently tours, live in Baltimore, Md.