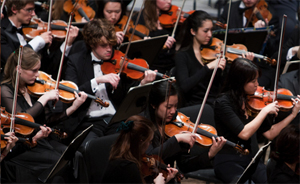 The CCM Philharmonia and Concert Orchestras open their seasons with a festival celebrating the legacy of Ludwig van Beethoven. Running from Sept. 14 through Oct. 12, the Beethoven Festival showcases the talents of CCM students and faculty in a concert series featuring a variety of the composer’s works, including six of his nine symphonies, two overtures, two concertos and a variety of chamber music.

Led by music director and conductor Mark Gibson, the CCM Philharmonia Orchestra presents the “Beethoven Festival Opening Concert” on Sept. 14. The concert features a selection of three of Beethoven’s orchestral works from his “middle period,” including the Overture to Fidelio and the lush Symphony No. 7 in A Major. CCM Piano Competition winner Julan Wang, a doctoral student in the studio of Awadagin Pratt, will perform Beethoven’s beloved Piano Concerto No. 5 (Emperor).

Beethoven was well known for his chamber music, having written 16 string quartets and a wide variety works for combinations of strings, piano and winds. On Sunday, Sept. 16, audiences get the opportunity to experience these more intimate works of Beethoven on a special afternoon concert featuring faculty and local artists.

A sampling of the wealth of solo and chamber music by Beethoven will be performed as part of the CCM Atrium Series. These free concerts offer audiences a musical lunch break at 12:20 p.m. on Tuesdays beginning Sept. 18 and running through Oct. 9 in the Atrium of the Corbett Center for the Performing Arts.

The Orchestra Series will continue the Beethoven Festival with the Concert Orchestra presenting the Overture to The Creatures of Prometheus, the Violin Concerto in D Major performed by Yang Liu, a graduate student from Wuhan, China and Symphony No. 4 in B-Flat Major on Friday, Sept. 21. On Friday, Oct. 5, the Philharmonia Orchestra will perform a symphony double-bill with Beethoven’s Symphony No. 2 in D Major and the famous and recognizable Symphony No. 5 in C Minor.

On Friday, Oct. 12, audiences may remember images of centaurs, fauns, cherubs and other mythological figures when the Concert Orchestra closes the festival Beethoven’s Symphony No. 6 (Pastoral), which was featured in Disney’s Fantasia. Also on the program is his very first full symphony, Symphony No. 1 in C Major.

Young and aspiring conductors can get the chance to learn the skills and nuances to conducting Beethoven at the Conducting Beethoven Workshop. Instructors include masters of conducting pedagogy from the United States and abroad. Major teachers include Mark Gibson, director of Orchestral Studies at CCM; Gustav Meier, director of graduate conducting at the Peabody Institute of Music; and Neil Varon, professor of conducting and ensembles at the Eastman School of Music. Internationally renowned conductor and pianist Leon Fleisher joins as special guest faculty. This year the program has received a record number of applications from students from all across the United States and the globe. Learn more about the workshop by visiting ccm.uc.edu/music/orchestra/conducting_workshop.

Purchasing Tickets
Tickets to each Philharmonia and Concert Orchestra concert are $12 for general admission, $6 for non-UC students and free for UC students with valid ID. These concerts can be included in a flex ticket package. See the individual concert listings below for additional information.

All concerts begin at 12:20 p.m. in the atrium of the Corbett Center for the Performing Arts in CCM Village.