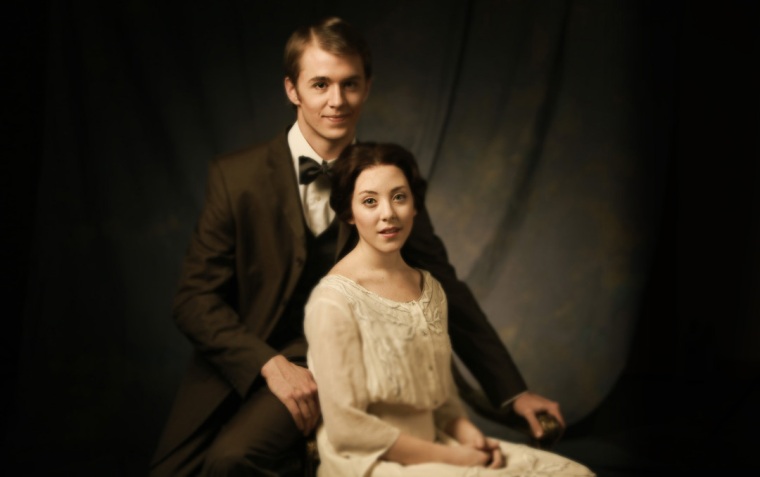 Life is often celebrated through major milestones, such as a wedding or a birth, but the everyday routines can be just as meaningful – a message CCM Drama students are taking to heart as they present Thornton Wilder’s classic American drama Our Town on April 20 (preview)-24 in the Patricia Corbett Theater in CCM Village.

Winner of the Pulitzer Prize for Drama in 1938, Our Town presents a timeless portrait of life in mythical Grover’s Corners, New Hampshire, and follows George Gibbs and Emily Webb as they experience daily life, love and marriage, and death and eternity. With a wise stage manager narrating the show, Our Town explores essential truths about love and life through the magic of theatre.

“Thornton Wilder wrote the play to show the importance of day-to-day life, which is something everyone can relate to no matter the time period,” said junior Alec Silberblatt, who plays the stage manager who guides the audience through Wilder’s quintessential story of life in the early 20th century. “The play is a good reminder that we need to unplug ourselves sometimes, to stop looking at our phones or texting and instead stop to appreciate the people in our lives and the world around us.”

Written during the Great Depression, Our Town was presented as a way to remind the people facing hardships that they could be happy with a simpler life. Although written decades ago, Our Town’s messages of community, companionship and the significance of everyday life are still relevant today.

“Wilder was responding to the fact that his audience had endured eight years of a very deep depression and he was reminding them that they could have happy lives with fewer material things – Wilder has made this message of basic humanity so appealing that I think people today will walk out of the theater wanting to live that way at least for a while,” said director Diane Kvapil. “He is reminding us, with gentle persuasion, to fully experience and appreciate the gift of life.”

CCM presents Wilder’s wise and witty tale of life and the human experience on April 20-24 in the Patricia Corbett Theater.

Lady in the Box/Second Dead Woman – Brynn Langford (sophomore from The Woodlands, Texas)