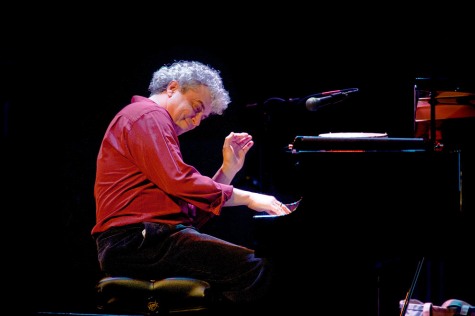 The CCM Jazz Ensemble and CCM Philharmonia have designed a collaborative evening featuring the complex and sultry music of Brazil, featuring special guest and three-time Latin Grammy Award-nominee Jovino Santos Neto. These seductive sounds can be heard in concert on Sunday, April 10 at 7 p.m. in CCM’s Corbett Auditorium.

Led by Music Directors Mark Gibson and Scott Belck, this Brazilian concert titled “Fantasia Brasileira: An Evening of Enchanting Brazilian Music for Orchestra and Jazz Ensemble” features a range of Brazilian music, including the polytonic sounds of Milhaud’s Saudades do Brazil and a selection of Jovino Santos Neto’s original compositions. Most of the music is based on the entrancing dance rhythms inherent in Brazil’s culture. The concert will also include the vocal stylings of Patricia Linhart, associate professor of voice at CCM and guest artist Bruno Mangueira, guitar.

About Jovino Santos Neto
Three-time Latin Grammy nominee Jovino Santos Neto, a master pianist, composer and arranger, is among the top Brazilian musicians working today. Currently based in Seattle, Washington, he has throughout his career been closely affiliated with the Brazilian master Hermeto Pascoal. He was an integral part of Pascoal’s group from 1977 to 1992, where he fine-tuned his artistry, performing around the world and co-producing several legendary records.

Currently, Jovino leads his Seattle-based Quinteto and teaches piano and composition at Cornish College of the Arts. He can also be heard as a piano soloist, working with symphony orchestras, jazz big bands, chamber music groups, and in collaboration with  musicians such as his mentor Hermeto Pascoal, Bill Frisell, Paquito d’Rivera, Airto Moreira, Claudio Roditi, David Sanchez, Joe Locke, Marco Granados and many more. Since moving to the US from his native Rio de Janeiro in 1993, Jovino Santos Neto has continued to tour the world and to record prolifically. He has recorded multiple CDs with his Seattle-based Quinteto, including “Canto do Rio,” nominated for a Latin Grammy in 2004. In 2006 Adventure Music released “Roda Carioca” with an all-Brazilian lineup including Joyce, Hermeto Pascoal and several other notable musicians and long-time colleagues, earning him a second Latin Grammy nomination. In 2007, after receiving a special commission from Brazil’s Petrobras, Jovino composed and recorded “Alma do Nordeste,” a musical journey translating the essence of Northeastern Brazil into melodies, rhythms and  improvisations – connecting regional, universal, imaginary and real stories.  In 2008 he released a piano duo with Weber Iago, “Live at Caramoor,” also nominated for a Latin Grammy award in 2009. More recently, Jovino has recorded “Veja o Som (See the Sound),” a new double CD of duos with musicians such as Bill Frisell, Joe Locke, Paquito d’Rivera, Anat Cohen, João Donato, Airto Moreira, Joyce, Paula Morelenbaum and Monica Salmaso, among others.  The new work will be released by Adventure Music later in 2010.

His compositions have been performed by the Seattle Symphony, NDR Big Band in Hamburg and by numerous chamber music groups. Jovino gives lectures, clinics and master classes worldwide on the music of Brazil. Jovino has received commissions by the Cheswatyr Foundation, IAJE, ASCAP, CMA/Doris Duke Foundation, Jack Straw Foundation, Seattle Arts Commission, 4Culture, Artist Trust and Meet the Composer. He  has been artist-in-residence at some of the most prestigious music schools in the world, and was the recipient of a Golden Ear Award as the Best Jazz Instrumentalist of the Pacific Northwest in 2004.