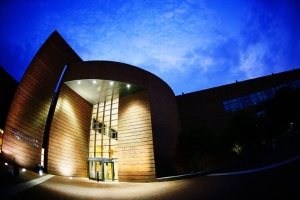 CCM is pleased to announce details for the 2010-11 Mainstage Series of drama, musical theatre and opera productions.

The 2010-2011 Mainstage Season will sweep you away – from Argentina to small town America, from riotous farce to the deepest of human emotions and across a landscape of truly great works in musical theatre, drama and opera. With sensational Tony Award-winning musical theatre hits, comedy and pathos from the American master playwright Thornton Wilder and opera in all of its glory, each title will be brought to life by the brightest and freshest young talent in Cincinnati. Here is a first look at what next season has to offer:

This dazzling “rock-umentary” follows the life of Eva Perón, a girl from a mundane background who became the most powerful woman in Latin America. Evita’s meteoric rise from her nightclub roots to a position of political prominence is told through a provocative mix of song, dance and a pulsating rock score that reflects the scheming, beguiling and compelling personality of a woman considered a sinner by some, a saint by others. Dead at the age of 33, Eva’s story is immortalized in this powerful, Tony Award-winning musical. Location: Corbett Auditorium. Musical Theatre Tickets: $22 (preview only); $27-$29, $17-$19 students.

The most popular of Mozart’s operas, The Marriage of Figaro presents a comically tangled web of infidelity, duplicity, blackmail and mistaken identity, all leading to a happily-ever-after ending. Recounting a single day of madness in the palace of Count Almaviva, this classic opera buffa is celebrated for its wonderful arias, complemented by some of the finest ensemble scenes ever written. Sung in Italian with English supertitles. Location: Patricia Corbett Theater. OperaTickets: $27-$29, $17-$19 students

The breakthrough musical of the 1990s, Rent resets Puccini’s La bohème in the lower East Side of New York City. The Bohemian artists and poets of the original are now contemporary figures working on the fringes of the art world, finding humor, conflict and love in an environment struggling under the specter of AIDS. The winner of four Tony Awards and the Pulitzer Prize for Drama, this rock opera is a challenging, emotional and deeply moving portrait of a new generation. Location: Patricia Corbett Theater. Musical Theatre Tickets: $27-$29, $17-$19 students.

Winner of the 1930 Pulitzer Prize for Drama, this timeless portrait of life in a mythical New Hampshire town has become an American classic. Through the lives of Grover’s Corners residents George Gibbs and Emily Webb, Wilder explores the universal questions about the meaning of love, life and death. Location: Patricia Corbett Theater. Drama Tickets: $11 (preview only); $27-$29, $17-$19 students.

Based on a true story, this haunting opera tells the tale of the Carmelite Nuns, a small order put to death during the French Revolution. The fictional Parisian aristocrat Blanche de la Force attempts to find refuge with the nuns, setting the stage for a psychological study of devotion in the face of terror. Sung in English with supertitles. Location: Corbett Auditorium. Opera Tickets: $27-$29, $17-$19 students.

Subscription renewal information will be sent to current subscribers in May 2010, and new subscriptions become available in late summer 2010.

Flex Concert Tickets Are Back
Subscribers are also able to purchase flexible ticket packages to CCM’s 2010-11 Mainstage Series of concerts, which will include wind, orchestral, jazz, dance, choral and guest artist events, among others. Available exclusively to subscribers, Concert Flex Ticket Packages offer the chance to experience the incredible range of additional performing arts events at CCM at 50% off regular concert ticket prices. Programming and ticket package details for the CCM Mainstage Series of concerts will be announced late summer and single ticket sales will begin September 27, 2010.

Performances will be held in Patricia Corbett Theater and Corbett Auditorium on the UC campus.